Here’s the question making the rounds in Colorado: Is the state asking for enough start-up money from the federal government for its online health insurance marketplace? 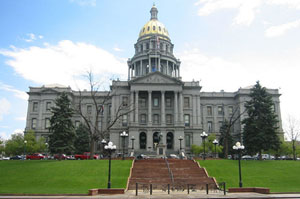 The Colorado State Capitol (Photo by Alexander Meins via Flickr).

Consumer advocates are worried the answer is “no.”

Statehouse Republicans, on the other hand, think it’s asking for far too much.

Colorado is bumping up against a May 15 deadline to apply for its third and final federal grant to launch its insurance exchange, recently re-branded as Connect for Health Colorado.

The $125 million request, if granted, would push total federal funding for Colorado’s exchange over $185 million.

Consumer advocacy groups, including the broad coalition known as the Colorado Consumer Health Initiative, think the request should include more than the current $10.5 million line item for a customer assistance network to help people buy policies in the exchange and figure out if they’re eligible for premium subsidies. Nationwide, funding for the online marketplace’s consumer assistance will vary widely between states.

If Colorado’s network is underfunded, “frustration and withdrawal from a few will lead to withdrawal from the enrollment process by many as word spreads about long wait times or impersonal or inadequate assistance ultimately leading toward bad press for the exchange,” CCHI wrote in one of three letters the state’s exchange board received from consumer groups criticizing proposed navigator funding levels. Navigators are the people who will provide help to individuals seeking to buy insurance through the exchange.

“The long-term viability of the exchange strongly depends on its success in the first year when Coloradans initial experiences will shape their impressions of the exchange for years to come,” echoed a letter from a second coalition that includes AARP, Boulder County and safety net health care provider Denver Health.

Exchange CEO Fontneau responded that Connect for Health Colorado is budgeting more for navigators than the $10.5 million in the federal grant request. She expects an additional $4 million to $6.5 million will be channeled to the exchange from administrative fees assessed on each policy sold, about $22 per year per policyholder. The exchange has also requested more than $2 million for the program from private foundations.

Some Republicans have the opposite concern: that Colorado is requesting too much federal money.

Colorado’s exchange, “should be funded through operating revenue, it’s not fair to put the burden on the federal taxpayer,” says Dr. Mike Fallon, a physician-entrepreneur Republican lawmakers appointed to Colorado’s exchange board. He’s angry that Colorado increased its grant request after learning in January that the grant could be used to fund operations beyond 2014.

“What we were going to pay for ourselves we’re now asking the feds to pay for,” he said.

Fallon doesn’t have enough allies on the board to modify its very pro-White House bent, but his opposition to the pending grant request this week stirred the body’s most fiery debate yet.

Other board members, including the head of the state’s Medicaid agency who serves in an ex-officio role, said the state should err on the side of asking for more money than it estimates it will need and return any unused funds.

But guessing the amount the state will need is difficult. If a relatively high number of people use the exchange immediately after it opens, a lot of revenue will be generated that can be used for operations. But if enrollment numbers are initially low, the state will need to lean on federal funding more to maintain the new infrastructure.

Fallon scoffed at suggestions that Colorado should ask for a high number and then pay back any unused federal funds.

“I believe your intentions are genuine,” he told a fellow board member, “but I’m cynical any government body will not spend” every dollar it has.

Fallon’s anger was echoed by Republican state lawmakers on a special exchange oversight board who reviewed the grant request Tuesday.

“We were given to understand that we were running the leanest, most cost-effective exchange in the country,” Gardner said, “so it’s disappointing.”

Other members of the committee seemed incredulous that the exchange would need another nine-figure sum after Colorado’s legislature had only days earlier approved the $22 per policyholder per year fee, as well as agreeing to send it any remains from the state’s now-disbanding high risk insurance pool.

“If [the exchange] were a private concern I think you’d be looking for a job,” Republican Senator Kevin Lundberg told exchange leaders Tuesday. He and other oversight committee members were under the impression that the exchange wasn’t planning to request additional funding beyond that in the measures approved by the state legislature. Democrats on the committee said they never heard that as those bills moved through the legislative process.

Republican Senator Ellen Roberts was angry that the committee’s sole meeting this legislative session came just one day before the session ended. And being asked to sign off on an 80-page federal grant request just days before its submission deadline clearly displeased her.

“The timing is horrible,” she said, “I’m almost without words.”

And Democrats on the committee stood up to defend the grant request.

“We as Colorado taxpayers are paying” to fund exchanges nationwide, said Senator Jessie Ulibarri, “and if we choose not to use it, one of our neighboring states can apply for and receive those funds to set up their own exchanges, and then we’ll have an increasing cost for access to health care for our own residents.”

Colorado’s $125 million exchange grant request to Washington is still in draft form. The exchange board will hold a phone conference Friday to work out any details before submitting it in time to meet the May 15 deadline.