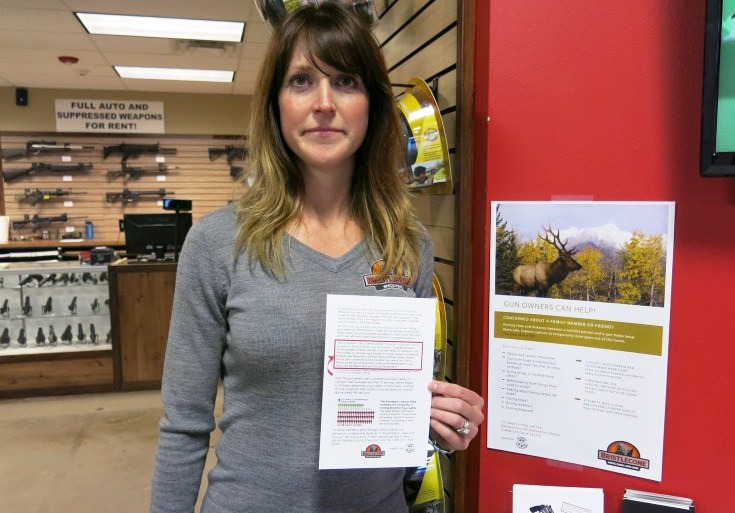 It’s ladies night at the Centennial Gun Club in a suburb of Denver. More than 80 women are here for safety instruction and target practice.

Tonight the club is offering more than shooting, though. The women rotate through the firing range, and in another large room, they hear a sobering presentation from emergency room doctor Emmy Betz. She’s part of a collaboration between gun shops and public health leaders in the state to help prevent suicide.

“If you’ve been touched by suicide somehow, if you could, raise your hand,” she asked. About half the hands go up.

Colorado has the nation’s seventh-highest suicide rate. In a typical year, more than half involve guns. Research suggests suicide is often an impulsive act, Betz says, and attempts are much more likely to be lethal when a firearm is used. If people survive a suicide attempt, they are far less likely to eventually die from suicide.

“Unfortunately, with firearms typically there’s not that second chance,” she said.

There’s a new push in the national conversation about gun violence that is attempting to sidestep the political rancor, to find common ground on one thing — guns and suicide. The campaign in Colorado is called the Colorado Gun Shop Project.

Centennial Gun Club is one of 46 on board throughout the state. The project formally started in the summer of 2014, modeled after a similar one by the New Hampshire Firearm Safety Coalition.

During Betz’s talk, organizers hand out Life Savers candies to drive home the message. Gun owner Lily Richardson said she thinks the information could do just that: save lives. “I think those who are aware and taking the initiative to talk about it can help make the difference,” she said.

Nancy Dibiaggio, a new gun owner, agreed. “It’s a big issue, and I think it’s great Colorado is jumping on the wagon with this.”

Dick Abramson, Centennial’s owner, said he welcomes the opportunity to facilitate the discussion. “The difficulty is that it’s not a topic people want to just bring up and talk about over the cocktail table, right?”

He said workers at his store have refused to sell a gun to someone they’re concerned about or feel is having an especially bad day. “My honest feeling is this is a nonpartisan issue,” he said. “This is something that everybody can get behind. It should be a universal concern of everyone.” 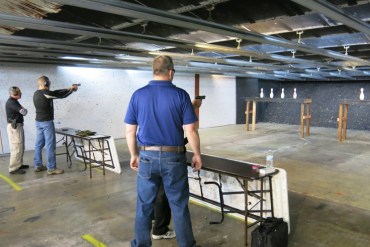 In another Denver suburb, the Bristlecone Shooting, Training and Retail Center is also part of the project. At its range, shooters take target practice at bowling pins lined up on the far wall.

In the shop’s showroom, store owner Jacquelyn Clark shows off literature on display “that talks about suicide prevention and what to do if somebody you know or you yourself are in crisis,” she said.

A poster reads, “Gun Owners Can Help!” Under a photo of a lone elk in the mountains, it lists signs someone may be suicidal and a phone number for the National Suicide Prevention Lifeline.

Clark said there’s now an 11th commandment on gun safety rules: Consider off-site storage — family, friends, some shooting clubs, police departments or gun shops — if a family member may be suicidal. Clark says most people don’t realize that the majority of gun deaths are not homicides but suicide.

A survey of hospital emergency rooms by the Centers for Disease Control and Prevention in 2011 found an estimated 21,175 suicides involving firearms compared with 11,208 homicides involving them. 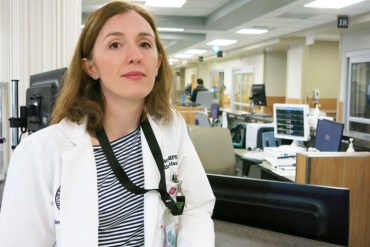 Dr. Emmy Betz works in the Emergency Department at the University of Colorado Hospital and also is part of the Colorado Gun Shop Project. (John Daley/Colorado Public Radio)

“The gun community itself is more at risk than the regular community, not because gun owners tend to have more mental health issues but just because they have more access [to firearms],” Clark said.

Jarrod Hindman, director of the Suicide Prevention Resource Center in Colorado, says he appreciates that local gun advocates are taking the lead. “This is their project,” he said. “We’re just helping to facilitate the process.”

More than 500 Coloradans took their own lives with a firearm in 2014, said Hindman, but talking about the role of guns is hard.

“Obviously this is a very contentious topic, and we’ve found a way to find middle ground in a topic where we didn’t think there was a middle ground,” he said.

And now, a large trade association for the firearms industry, the National Shooting Sports Foundation, is teaming up with the American Foundation for Suicide Prevention to develop a suicide prevention campaign for the gun group’s 13,000 members. Their goal is to reduce the annual suicide rate by 20 percent in the next decade.