UPDATE: The Colorado Senate Appropriations Committee voted against the Fort Lyon proposal on Friday morning, killing its chances of passage for this year.

Last summer’s mass shooting at the movie theatre in Aurora, Colo., led Gov. John Hickenlooper to call for stricter gun control and big new investments in mental health care. Several significant gun bills passed, and a package of mental health reforms are moving forward, but there may not be enough support to win funding for 300 new in-patient psychiatric beds.

That proposal by the Democratic governor would bring mentally ill and addicted homeless people to Fort Lyon, a one-time mental hospital, then prison, that’s been shuttered for two years near the tiny town of Las Animas. The patients would leave the streets of the cities where they live now and voluntarily come to Fort Lyon. And the town would welcome the jobs that reopening the facility would create. 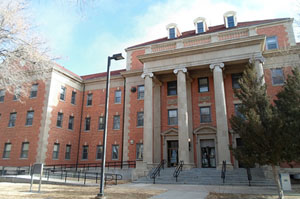 Jack Simms, who’s been homeless in Colorado Springs for a decade, says this step is necessary.

“I see it, man. They need to open some beds somewhere, at a mental health facility or something. I can survive out here, [but] these mentally ill people, it’s rough. They just walk up and down the paths. They look like zombies,” says Simms, who says he struggles with depression and smokes pot to cope. “I’d be a guinea pig. I’d try it out.”

Kathleen Tomlin used to work as an administrative assistant at the old psychiatric hospital, a veterans’ facility.  It’s several miles past Las Animas’s one stoplight. Dozens of empty buildings surround an old parade ground, giving it the feel of an empty college campus.

“When I started, there were over 600 employees,” says Tomlin as she tours the building where she used to work. “That was in 1973.”

“This was a good place because it was soothing,” she adds, “It was relaxing. It wasn’t like a big city, metro area. [Patients] loved it and they would get attached. And some of them still see me and they say, ‘Oh, I miss Fort Lyon.’”

But the movement to de-institutionalize the mentally ill meant jobs dwindled at Fort Lyon, and businesses closed in Las Animas.

Tomlin says people here used to take pride in working at Fort Lyon and they would like to see the hospital and the jobs come back. She’s cautiously optimistic now that state lawmakers like Rep. Joann Ginal, a Democrat from Fort Collins, are backing the governor’s push to reopen it.

“I can’t think of a better use for a historic campus, and also a place that is going to help improve the lives of many people,” Ginal said.

Hickenlooper’s idea is that the homeless mentally ill people who volunteer to come to Fort Lyon for treatment will get housing vouchers they can use to live elsewhere when they complete the program.

But not everyone thinks that this plan is going to do a lot of good.

Tsemberis says research shows that renting apartments for homeless, mentally ill people in the neighborhoods where they are, and getting them treatment there, works better than shipping them off someplace.

“You could skip all that transitional stuff, and go right to graduation from the street,” Tsemberis says. “Give the support services, and you wouldn’t have to go home by way of Fort Lyon.”

There’s value to that approach, says John Parvensky, head of Colorado’s Coalition for the Homeless. He’s worked for years to get local housing and treatment programs funded.  But he supports Fort Lyon reopening, because prior to the governor’s proposal, nobody was talking about pouring millions of dollars into any help for people living on the streets.

“It’s not really a question of either-or: Should the state support community-based options or should they support Fort Lyon?” says Parvensky. “They really should be doing both, but historically they’ve been doing neither.”

The governor’s proposal faces a tough hearing at the state Senate appropriations committee on Friday. Opponents on that committee point out that there’s only funding for it for two years. But backers of the idea are optimistic they can find more money for future operations.

Still, opponents inside and outside the legislature say trying to combine economic development with helping the homeless won’t do either well. Colorado would be better off, they say, helping Las Animas find a new industry and spending money on housing and mental health services at the neighborhood level.

Colorado Weighs Reopening A Psychiatric Hospital To Serve The Homeless