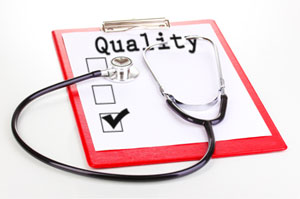 A Kaiser Health News analysis of the latest federal data on the nation’s nearly 1,200 community health centers showed wide variation in the quality of care delivered by the private, nonprofit clinics which are expected to play a pivotal role under the federal health care law.

More than 20 million people — mostly the poor and uninsured — get primary care at the federally funded centers. To help them prepare to treat millions of newly insured people beginning in 2014, the law is pumping $11 billion into expanding the facilities.

Centers in New England generally performed better than centers in the South and West, according to the analysis of data obtained through the U.S. Freedom of Information Act.

How did the nation’s hospitals do? Here are some sortable, interactive charts:

Mississippi’s health centers, for instance, had the highest proportion of low birthweight babies, which puts newborns at risk for lung and other problems. Wyoming and Oregon had some of the lowest child immunization rates.

The differences may partly be explained by higher rates of insurance coverage in New England which make it more likely people will seek care when they need it. Those without coverage must pay out of pocket for every visit, even if fees are based on a sliding scale. Centers with more insured patients also get paid more for their services so they also have more money to hire case managers and other staff.

Other differences that might affect health outcomes include state income levels, racial and ethnic makeup and dietary habits. In some cases, data reflect larger health-related trends in a state.

But even centers in the same city often performed differently.

“We hope clinics can learn from this information [because] we need a safety net that survives and thrives,” said Anthony Wright, executive director of Health Access California, a consumer advocacy group. He attributed the variation to the fact that some clinics treat a large number of patients speaking multiple languages, or who lack insurance and may be reluctant to buy medicine or follow through with other treatments, or who are migrants or homeless.

The centers are required to submit data to the federal Health Resources and Services Administration (HRSA) on 11 quality measures, including rates of immunization and cervical cancer screenings, early prenatal care and how often patients were assessed for obesity and smoking. About half the centers have electronic records and report all their data; the rest provide a sample of their records.

The National Association of Community Health Centers, a trade group, questions the data’s usefulness, noting the results are not adjusted for patients’ health status, or for centers that have high rates of migrants, homeless or uninsured patients. Nonetheless, it said it would work with the government “to develop a rigorous and transparent system for measurement and improvement.”

Despite those shortcomings, the data are a helpful barometer, said Peter Shin, associate professor of health policy at George Washington University. “It gives centers a sense of where they are and where they have to go to improve,” he said.

Unlike government report cards on hospitals and nursing homes, patients are not expected to use this data to shop for health centers. Typically, people go to the clinic closest to where they live or work. And the government has done little to make the data about individual centers available.

The information is geared to motivating centers to improve and to helping the government identify those that need additional help, said Jim Macrae, HRSA associate administrator. “Despite serving a population that is often sicker and more at risk than seen nationally, health centers are making significant progress on improving the health of their patients,” Macrae said. “Continuing that progress is a high priority for us.”

He noted the average rate of women getting early prenatal care improved by 5 percentage points over the past five years.

Several studies including a July report by Stanford University researchers show the quality of care at the health centers is comparable to that delivered at private doctors’ offices, even though the centers typically see patients who are poorer and sicker.

But like the care given in doctors’ offices, the centers’ performance varies widely — with some excelling in some areas while doing poorly in others.

In contrast, Wyoming was among the worst-ranked states on six of the measures: diabetes and blood pressure control, child and adult weight screening, tobacco assessment and immunization rates.

Dr. Darren Rahaman, chief medical officer at Nevada Health Centers which has 23 clinics, attributed those scores to the large number of uninsured patients who are less likely to get needed care or medicine because they don’t have the money. Health centers are required to charge the uninsured on a sliding fee scale based on their income.

About 30 percent of pregnant women at his facilities get early prenatal care, compared to 70 percent among centers nationally. “Women don’t come in because they are concerned about having to pay out-of-pocket for care,” Rahaman said.

Pines Health Services, a health center in Caribou, Maine, near the Canadian border, has some of the best quality scores in the state and nationally. CEO Jim Davis said it helps that only a small percent of its patients are uninsured. Better finances enable the center to use case managers to follow up with patients and make sure they’re taking their medications. It also helps that the center works in a relatively small, close-knit community. “Our providers know our patients as friends and family,” he said.

Nearly nine in 10 pregnant women at the center get early prenatal care because its obstetricians are well known and make sure women come in as soon as they know they are pregnant. Despite the high marks, Davis said he sees room to improve. “Even if we are good, it is still not enough,” he said.