More than two years ago, studies found that injection of medical cement into compression fractures of the spine produced no better pain relief than “sham” injections.

Yet doctors continue to perform the $5,000-plus procedure and most insurers, including Medicare, still cover it. 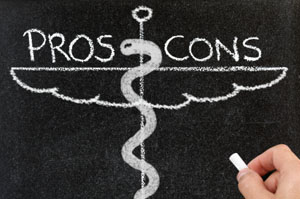 The continued use of spinal cement injections is a cautionary tale for those who hope to slow the rise of health care spending by compiling evidence about what works and what doesn’t.

Congress and the Obama administration are betting more than $3 billion over the next decade that “comparative effectiveness” research can transform medical care by helping determine the best approach to a particular illness. On Wednesday, an independent, non-governmental board established by the health care law — called the Patient-Centered Outcomes Research Institute (PCORI) — will release national priorities for spending that money.

But mustering evidence about risks and benefits—often a difficult process – may prove easier than persuading doctors and patients to abandon less-effective or even discredited tests and treatments, particularly those already in widespread use.

“Once it’s out of the box, it’s hard to reel stuff back in,” says Elizabeth McGlynn, a former RAND researcher who now heads the Kaiser Permanente Center for Effectiveness and Safety Research. (KHN is not affiliated with Kaiser Permanente.)

It’s hard because those marketing a particular drug, device or test have a financial interest in protecting the status quo. Hard, too, because consumers embrace research when shopping for a dishwasher or a car, but may be unable or unwilling to apply that approach to complex issues surrounding medical care.

Doctors trained to do things one way may be more likely to trust the consensus of their colleagues and their patients’ preferences than new data. Some also fear the data will be used for payment decisions, undermining physicians’ autonomy and leading to rationing.

And while research can shed light on what treatments do not work for the majority of people, a subset of patients may still benefit. Study methods can also be faulty and results contradictory.

“That’s still a subjective call they [researchers] are making,” says Jennifer Jaff, executive director of Advocacy for Patients with Chronic Illness, a Connecticut-based group that helps patients appeal medical coverage decisions. “If you find a medical journal article that says, ‘no’ [a particular treatment doesn’t work], I can find you one that says ‘yes,’ it does.”

When the two spinal cement studies were published in the New England Journal of Medicine in 2009, for instance, critics immediately questioned their validity.

“Health plans didn’t stop coverage and doctor groups fought back against the results,” says Steven Pearson, at The Institute for Clinical and Economic Review (ICER), a private firm that assesses medical technology.

Professional societies representing interventional radiologists, who often do the procedure called vertebroplasty, said the studies were too small to be meaningful and successfully fought insurers’ attempts to limit coverage, according to an article Pearson co-authored in the December issue of the journal Health Affairs.

“We believe it is premature—and possibly incorrect—to conclude that vertebroplasty is no better than a sham,” said a November 2009 statement from the Society of Interventional Radiologists.

At that time, the procedure had been covered by Medicare for eight years, with about 73,000 performed annually on Medicare patients.

Similar controversy occurred in October, when a government-backed panel of experts issued draft recommendations against routine screening of men for prostate cancer, saying the Prostate Specific Antigen (PSA) test may lead to more harm than good.

The American Urological Association was among the groups strongly opposing the recommendation, saying it would do men “a great disservice.”

A month later, reaction was also split when the Food and Drug Administration withdrew approval of the costly drug Avastin for advanced breast cancer, saying it wasn’t safe for that use. Even as some praised the move, saying the drug could shorten a woman’s life, others insisted it could help some patients.

“If we’re ever going to have a hope of spending less money on medicine, we’re going to have to stop paying for things that don’t work, or hurt people,” says Sean Tunis, founder and director of the Center for Medical Technology Policy, a Baltimore-based nonprofit organization that studies ways to improve medical research. “You could not ask for two more clear examples.”

PCORI Executive Director Joe Selby does not minimize the challenge of changing medical practice, but remains optimistic about the value of credible evidence. The key, he says, is getting doctors and other health professionals involved “in every phase of our work, from the selection of research topics to the dissemination of research results.”

Congress set up the institute’s 21-member board to represent a broad cross section of health-care stakeholders, including representatives of drug and device makers, insurers, consumers, researchers and government agencies. It is funded in part by a new $1 to $2 per-person annual fee on Medicare and most health insurance policies.

The law prohibits its findings from being “construed as mandates for practice guidelines, coverage recommendations, payment, or policy recommendations.” But they can be used by government health programs for coverage determinations if done through an “iterative and transparent process which includes public comment” and which considers subgroups of patients.

That may reassure critics who fear that insurers will use the data for payment decisions, but on the flip side, Tunis worries that comparative research won’t translate into change in medical practice without “financial incentives to be cost conscious — some kind of sensitivity to spending.”

While PCORI’s findings cannot be used to set payments for medical services, other parts of the health care law encourage greater attention to the relative cost-effectiveness of treatments.

For example, new types of lump-sum payments to hospitals and doctors who team up in “accountable care organizations” make them “responsible for quality and efficiency of care in a way they never have been before,” says Pearson.

He says many policy experts believe this will give ACOs “a tremendous incentive to look at (medical) evidence and be more thoughtful of cost-effectiveness.”

While calling that an ideal vision for the long term, Pearson says actions are needed in the short term, including insurers limiting coverage of new drugs or devices until they are proven safe and effective. “We have to get better studies first before something is out of the barn.”

Once they are in wide use, it is more difficult to set restrictions. Neither Medicare nor commercial insurers have taken steps, for instance, to limit routine prostate cancer screenings, or to bar coverage for treating breast cancer patients with Avastin.

Lee Newcomer, senior vice president for oncology at UnitedHealth Group, says that insurer will continue to cover PSA tests because some men, such as those with a family history of prostate cancer, may benefit from routine testing.

United will also cover Avastin for breast cancer, although Newcomer says the FDA’s move likely means doctors and patients will “have a much more honest discussion about Avastin’s role in breast cancer therapy.”

Like other insurers, he says, United defers coverage decisions on chemotherapy to the National Comprehensive Cancer Network, a coalition of 21 academic medical centers, which is still recommending the treatment.

Insurers use the network, Newcomer says, because “no matter how fair and honest we are on our assessments, if we said ‘no,’ people would say, ‘Oh, they’re doing it to save money.'”