People who live in rural Northern California will see more choice and competition in the health insurance marketplace next year, giving consumers a better chance of finding a plan — and a doctor — that can meet their needs.

The changes, unveiled last week by the state’s Affordable Care Act marketplace Covered California, will now allow some consumers to cross state lines for care. That means Californians living near the Oregon or Nevada borders can get subsidies to buy plans that pay for routine care in those states, something that previously was allowed only in emergencies.

In addition, all 22 counties that had areas with only one choice of insurer in 2015 and 2014 will now have at least three insurers selling plans.

Northern California customers may notice a jump in their premium costs next year, however. Region-wide, they will have a 10.6 percent increase over this year, while the statewide average increase is 4 percent. 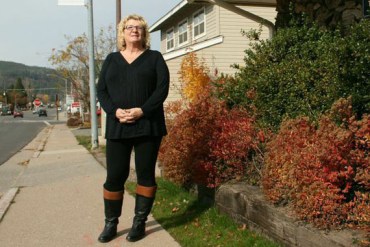 Lori Lomas, an insurance agent with Feather Financial in Quincy, Calif., welcomes the increased choices Covered California will have for mountain communities in 2016.  (Photo by Pauline Bartolone)

Lori Lomas, a health insurance agent with Feather Financial in Quincy, California, said not being able to travel to Reno, Nevada for medical care has been a hardship for many of her clients who live in isolated communities in the Sierra Nevada mountains.

“It’s disrupted their care,” she said. “It’s affected people’s relationship with their doctors and it’s affected their trust in their insurance companies, big time.”

Next year, the two major insurers in the area, Anthem Blue Cross and Blue Shield of California, will offer routine out-of-state doctor coverage in 2016 individual policies.

A minimum of three insurers will be offering plans in each zip code of a 22 county region, a vast rural area that stretches south from the border of Oregon to the Sacramento County line. Two additional insurers will be selling in some parts of the area.

Anthem Blue Cross, which has 91.7 percent of the health exchange’s market share in the Northern California region, says it made the decision to reinstate out-of-state coverage after hearing from consumers that they wanted the benefit.

“At the earliest opportunity to make substantive changes to our Covered California policies, we did,” says Darrel Ng, spokesman for Anthem Blue Cross.

Consumer demand also motivated Blue Shield of California to expand into areas where they had retreated from in 2014. Before new market rules under the Affordable Care Act, it had sold individual policies in all areas of the state. After January 1, 2014, it stopped selling in about 250 zip codes, including vast areas of Northern California, in order to keep “premiums low.”

The company now says that decision “created a lot of disruption in the marketplace,” and in 2016, the company will be selling again in all zip codes.

“We’ve been able to now provide a network that would support us offering coverage in those zip codes that we didn’t have covered in 2015,” said Jeff Smith, General Manager and Vice President for Individual and Family Plans for Blue Shield of California.

Covered California would not comment on how its negotiations with insurers may have influenced the companies’ decision-making, but the exchange says it is pleased that consumers will more choices next year.

United Healthcare and Health Net will also be selling policies in Northern California next year. Covered California consumers may take a good look at those new options next open enrollment period. Lomas says the restricted doctor coverage and Blue Shield’s black out in certain zip codes had given the two companies a “bad name.”

“Now I’m going to show people the screen and it will be [more] choices for everyone,” says Lomas about the next open enrollment period.

In some areas of Northern California, health insurance shoppers will see even more options.