Like hospitals and doctors everywhere, Banner Health fights a daily battle to get paid by insurance companies and government agencies for the care it delivers.

So the hospital system hired a company called Executive Health Resources to fight back against the likes of Medicare and UnitedHealthcare when they deny claims or pay bills for less than what Banner thinks it is owed.

But Banner executives began to worry about EHR’s independence when the firm was acquired in 2010 by UnitedHealth Group, UnitedHealthcare’s parent.

“It does seem as though there is reason for concern because they can use our own information against us,” said Dennis Dahlen, CFO of the Phoenix-based Banner.

Critics call United’s ownership of EHR a troubling conflict of interest that could give it confidential information about rivals as well as patients and limit EHR’s power to demand payment from its much larger corporate sister. “How is that ownership going to affect the mission of a company whose business is to extract more money from payers?” said Scot Silverstein, a physician and specialist in medical software and patient records at Drexel University. “Imagine going to a plaintiff’s lawyer to take your malpractice case and not knowing that plaintiff’s lawyer actually works for the hospital that you’re suing.”

The problem isn’t limited to United.

As insurers eager to add revenue streams convert themselves into diversified health-services companies, they often buy traditional business adversaries, including physician groups and hospital consultants such as EHR. They’re also buying technology companies and research firms that serve medical-care providers, raising questions not only about independence but about the privacy of patient information. 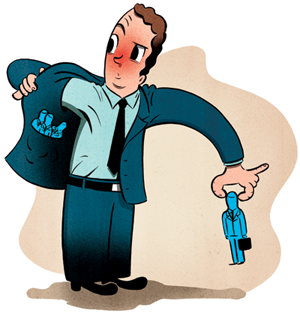 “I am not convinced that, even with proper disclosure, that an entity owned by United could aggressively advocate against United’s interests,” said Mila Kofman, a Georgetown professor who was Maine’s insurance superintendent.

United says it maintains rigorous separation between its insurance wing and the health-services companies.

“We continue to grow and strengthen our relationships with hospitals,” said Thomas J. Mercer, EHR’s chief executive. “We earn our clients’ trust by adhering to the highest ethical standards, and our client agreements contain confidentiality restrictions which preclude us from sharing their confidential information outside of EHR.”

One client satisfied with EHR’s work is Bethesda Healthcare System in Florida.

“They operate under separate umbrellas,” since United took over, said Joanne Aquilina, its chief financial officer. “They work with all our payers in making sure we collect every dime. They’re very careful about the information they’re collecting and making sure it doesn’t get back to the United side.”

Even so, United’s ambition to diversify has brought complications. This year, one of its newly acquired doctor networks, Monarch HealthCare in California, was accused of acting as a sales force for United’s insurance company, recruiting members from rival plans. Three years ago United agreed to a $350 million payment to doctors and patients and a $50 million deal with the New York attorney general to settle allegations that it rigged a database to underpay doctors.

While United has “made the most aggressive push” for diversification among health insurers, rivals have expanded their portfolios as well, said Thomas Carroll, a managed-care analyst for Stifel Nicolaus.

In March, for example, Blue Cross plans in Pennsylvania and New Jersey teamed up with technology company Lumeris to buy NaviNet, which combines medical and claims data on one network for doctors. One of those Blue Cross plans, Highmark, is also taking control of hospitals and physician practices in the Pittsburgh area.

For its part, United has bought physician networks such as Monarch; Axolotl, which allows doctors, hospitals, labs and radiologists to share patient information electronically; Picis, which specializes in data networks involving seriously ill patients; and CareMedic, a claims consultant that promised hospitals they would “Get PAID” by insurance companies.

“We’re in the beginning of a lot of these kinds of conflicts in historically stable relationships,” said Glenn Melnick, a health economist at the University of Southern California.

In 2007, United, which owns one of the country’s biggest private health insurers, with more than 30 million members, bought the Lewin Group, a health-policy researcher. Critics say the relationship raises questions about the group’s independence, pointing to Lewin work used in 2009 to undermine the case for a government, “public option” insurance plan that would have competed with United.

The health plan sought binding arbitration and damages from Monarch of at least $10.5 million. Monarch disputed the allegations, saying in a prepared statement that it was “aware of no instances of a Monarch physician declining to provide care to a Blue Shield member.”

Also in February, a federal judge approved the distribution of hundreds of millions of dollars paid by United in compensation for what New York authorities said was a long-running scheme to minimize insurance reimbursements. A database run by the same United unit that now owns EHR led UnitedHealthcare and other insurers to underpay out-of-network physicians for years, according to allegations in a 2009 settlement with Andrew Cuomo, who was then New York’s attorney general.

The other victims were patients, who were billed “billions of dollars” for what insurance didn’t cover, an investigation by the Senate Commerce Committee found the same year. Doctors received about $200 million of the $350 million settlement paid by United, according to the American Medical Association, which had sued the insurer over the database. Patients received a lesser amount.

United denied that the unit involved, Ingenix, committed fraud. In addition to financial settlements, the company acknowledged a conflict of interest and agreed to switch management of the billing database to an independent nonprofit. UnitedHealth Group’s chief executive, Stephen Hemsley, said he regretted “that we were not more forceful in our broad disclosures” about Ingenix’s billing database ties to United’s insurance company

The next year Ingenix bought EHR, another company that deals with medical provider claims. Soon afterward, Ingenix changed its name to OptumInsight, which is part of United’s rapidly growing Optum division of health-industry service companies. Appealing claims denials has become a huge, high-tech business, reflected in the more than $1 billion that United reportedly paid for EHR.

EHR and its rivals employ sophisticated software and highly trained analysts to justify claims. Claims defenders have been in especially high demand since the government expanded the use of “recovery audit contractors,” which second-guess Medicare billing, three years ago.

“What we’ve seen is that payers generally don’t like to pay. Kind of ironic,” said Caitlin Zulla, a senior vice president at MedAssets, a competitor of EHR. “Unless you’re being exceptionally aggressive and you’ve got great analytical tools … the payer is not going to pay you correctly.”

UnitedHealthcare is often deemed one of the most reluctant payers. Hospital managers repeatedly give it the lowest marks in an annual survey by Revive Public Relations, a California firm that represents hospitals.

“Based on the direct feedback of hundreds of hospitals across the U.S. over five years, United has consistently been rated the worst health plan for claims processing and denials in the country,” Revive President Brandon Edwards said. “Many hospitals have commented that it’s almost as though United’s contracts and administrative processes are specifically designed to generate high denial rates.”

UnitedHealthcare spokesman Daryl Richard dismissed the Revive survey, saying “it does not use a scientific methodology and seeks Web-based responses from a couple hundred hospitals.” That, he added, is “not an accurate reflection, given UnitedHealthcare contracts with 85 percent of all hospitals in the U.S. today, with over 5,000 hospitals in our network.”

Revive’s latest survey “included 258 interview respondents representing 28 percent of all hospitals in the U.S.,” the firm said. Those surveyed were contacted by phone, e-mail, fax and mail, it said.

EHR, which is based in Newtown Square, Pa., and calls itself “The Physician Advisor Company,” hires doctors to prevent and reverse denials by documenting the medical necessity of hospital care. Robert Corrato, an internist, founded it in 1997 and remains its strategic adviser.

There is no mention of EHR’s ownership in the “Corporate Overview” section of its Web site or elsewhere on the site. Nor did the American Hospital Association identify EHR as a United subsidiary in September when it renewed its exclusive endorsement of EHR’s denial-fighting services. EHR pays the hospital association a fee for the endorsement. The group declined to disclose the amount.

More than 2,000 hospitals have hired EHR to help manage insurance claims. The group endorsed the company before the United buyout and decided to renew the deal after receiving assurances that EHR’s practices wouldn’t change under new ownership, said Anthony Burke, CEO of AHA Solutions, which works to pair hospitals with suppliers and consultants.

“There may be some hospitals out there who see the connection and decide not to use them,” said Don May, AHA’s vice president for policy. “And I think that’s totally reasonable.”

But the connection is sometimes shrouded. A staff orientation memo issued last fall at Banner Baywood Medical Center in Mesa, Ariz., incorrectly said EHR was “physician owned” – a year after United had bought it from Corrato and investors.

“If you’re a hospital and you’re in a relationship with a health [insurance] plan, you’ve always got to be asking yourself, ‘What is the health plan getting out of this relationship other than the transaction we’re doing right now?’?” said Chas Roades, chief research officer at the Advisory Board Co., a hospital management and technology consulting firm.

Claims consultants such as EHR typically gain access to millions of patient records and confidential contracts between hospitals and insurers, industry officials say. If UnitedHealthcare, United’s insurance wing, gained access to that data, it would obtain “a huge business advantage” over insurance rivals as well as the hospitals, Kofman said.

“You always wonder . . . will somebody use that in the commercial business to come back and snap a towel on me?” said Tom Robertson, a senior vice president at the alliance of academic medical centers known as UHC, which also endorses EHR as a claims consultant.

UnitedHealth’s purchase of EHR “created a bit of unease initially,” Robertson added. “But as I understand it, EHR’s growth in new hospitals coming on board has not slowed down. The market seems to be looking at that benignly.”

Like Florida’s Bethesda Healthcare, Arizona-based Banner Health is satisfied with the job EHR is doing, especially in dealing with the Medicare audits, said Dahlen, the chief financial officer. Despite the initial doubts, there has been no sign that EHR is taking unfair advantage of its situation inside Banner.

However, he added, “I’m not sure we’d ever see any evidence of that even if they were doing it.”