After years of legislative wrangling and last-minute patches, expectations are high among physician groups, lawmakers and Medicare beneficiaries that Congress could act this year to permanently replace the current Medicare physician payment formula. While committees in both chambers have approved their own “doc fix” proposals, the approaches have yet to be reconciled, and none have identified how they would pay for a repeal.

Below are some frequently asked questions and answers about the formula – known as the “sustainable growth rate” – and how Congress may change it.

Q: What is the sustainable growth rate?

A: Known as the SGR, the formula was created as part of a 1997 deficit reduction law designed to rein in federal health spending by linking physician payment to an economic growth target. For the first few years after it was created, Medicare expenditures did not exceed the target and doctors received modest pay increases. But in 2002, doctors reacted with fury when they came in for a 4.8 percent pay cut. Every year since Congress has staved off the scheduled cuts. But each deferral just increased the size – and price tag – of the fix needed the next time. 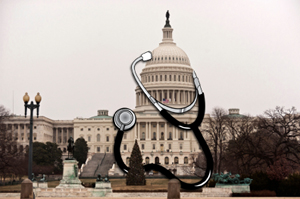 Q: What is Congress doing to scrap the SGR and what would they replace it with?

A: Two committees in the House – the Energy and Commerce and Ways and Means panels – and the Senate Finance Committee have passed bills that would repeal the SGR and replace it with a system of rewarding physicians based on the quality of care they provide to Medicare patients rather than the number of services performed. The goal is also to get doctors to focus more on coordination and prevention to improve quality and reduce costs.

Any final SGR bill is also likely to address other health policies – known as extenders – that Congress renews each year during the SGR debate. They include additional funding for therapy services, ambulance services and rural hospitals, as well as continuing a program that allows low-income people to keep their Medicaid coverage as they transition into employment and earn more money.

Q: What do doctors say about the SGR?

For physicians, the repeated prospect of facing big payment cuts is a source of mounting frustration. Some say the uncertainty has led them to quit the program, while others are threatening to do so. Still, defections have not been significant to date, according to Medicare Payment Advisory Commission (MedPAC), which advises lawmakers on Medicare payments. In a  March 2013 report, the panel found that while beneficiaries access to care was good, for some “seeking a specialist were more likely to report that they had no problem finding a doctor than beneficiaries seeking a primary care doctor.”

Just as many doctors scrutinize their coding and billing practices today, the hope is that over time they’ll pay as much — or more — attention to the new system’s measures of quality, safety, and patient satisfaction, says Dr. Robert M. Wachter, associate chairman of the Department of Medicine at the University of California, San Francisco.

For example, a physician’s electronic medical records monitoring system may provide prompts to ensure she is providing all the appropriate evidence-based care at the right time. The physician may also insist on an hourly meeting each week with her partners and practice manager to review the group’s performance, a conference that in the current system is likely to not be compensated. “In short, lots of activities that today are completely elective and non-mission critical, but would no longer be,” Wachter said.

A major challenge to replacing the SGR is whether effective alternative payment systems can be developed quickly, former Centers for Medicare and Medicaid Services administrator Mark McClellan noted in an article published earlier this month in the Journal of the American Medical Association.

“Although there is promising evidence for many payment reforms now, no specific alternative payment models have been identified that could clearly reduce costs while improving quality across the nation,” wrote McClellan, who is now is a senior fellow and director of the Health Care Innovation and Value Initiative at the Brookings Institution.

The SGR reinforces what many experts say are some of the worst aspects of the current fee-for-service system – rewarding doctors for providing more tests, more procedures and more visits, rather than for better, more effective care. MedPAC has advocated for the formula’s repeal, calling it “fundamentally flawed” and said it “has failed to restrain volume growth and, in fact, may have exacerbated it.”

Q: How much is all of this going to cost?

A: According to the Congressional Budget Office, repealing the SGR would cost about $116 billion over the next decade  — far less than previous estimates – in part due to lower Medicare spending on physician services during the past three years. In January 2012 CBO estimated the cost of the doc fix at $316 billion, which it reduced to $245 billion in August 2012.

But those figures don’t include the cost of any pay increase for physicians. The plan calls for giving physicians a yearly payment increase of 0.5 percent through 2023, which would add nearly $20 billion to the bottom line. Adding funding to continue or make permanent the Medicare extenders would also make the final deal more expensive. The Senate Finance package, which includes many of the extenders as well as increased payments to doctors who comply with new quality measures, will cost $148.6 billion over the next decade, according to CBO.

At a Dec. 11 markup of legislation to repeal the SGR, Senate Finance Committee Chairman Max Baucus, D-Mont., noted that the Congress has spent $150 billion on those temporary patches – more than current estimates for a permanent fix.

Q: How is Congress going to pay for this?

A: That’s unclear. None of the committees have identified how to finance the doc fix, intentionally staying away from the thorny issue in order to build political momentum to pass the legislation. Other Medicare providers, such as hospitals, are concerned that Congress may reduce their Medicare payments to help finance a repeal of the SGR. Some lawmakers and physicians groups have previously advocated taking money from the Overseas Contingency Operations fund, discretionary funding for the wars in Iraq and Afghanistan, to finance an SGR repeal.

Q: When is Congress expected to act?

A: Just before leaving town for a holiday break in late December, lawmakers in both chambers voted to extend the current SGR fix until March 31, avoiding the scheduled 24 percent cut that was set to go into effect Jan. 1. Advocates say Congress can find consensus – and money – to move a permanent SGR repeal by the end of March.

Baucus, who has been nominated to be the U.S. ambassador to China, is eager to get the SGR repeal done before his likely Senate confirmation. But even if that doesn’t happen, the bipartisan, bicameral interest in a permanent SGR fix – plus continued heavy pressure from physician groups – may be what’s needed to push the measure through Congress and onto the president’s desk.

Congress Is Poised To Change Medicare Payment Policy. What Does That Mean For Patients And Doctors?