This story is part of a partnership that includes WNPR, NPR and Kaiser Health News. It can be republished for free. (details)

Kevin Counihan, the head of Connecticut’s health insurance marketplace, will be the new CEO of healthcare.gov, the website that 36 states use to sell insurance under the Affordable Care Act, the administration announced Tuesday.

Department of Health and Human Services Secretary Sylvia Burwell tapped Counihan to lead the site as part of a revamped management structure that aims to have the second year of Obamacare run more smoothly than the first. 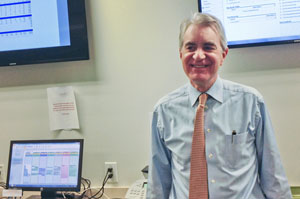 Access Health CT, under Counihan’s leadership, is one of the more successful state-run exchanges. About 257,000 people got coverage, according to the state, including 79,000 people who signed up for private insurance. Surveys show that about half the people who gained coverage in the state were previously uninsured.

“One of the most important things we did is we showed that government can work,” Counihan said at a press conference in Hartford Tuesday. “It can take on a highly complex social program and succeed.”

At the press conference, Connecticut Gov. Dannel Malloy said Burwell had called him to discuss Counihan. The governor joked that Counihan should have his head examined for agreeing to go to Washington.

Burwell, in a press release, said that Counihan “will be a clear, single point of contact for streamlined decision-making.” The release announced several other hires as well.

Obamacare year 2 starts with enrollment opening on Nov. 15, and the challenges are many. In addition to making sure the technical glitches stay in the rearview mirror, Counihan will be responsible for keeping people who are already signed up satisfied, as well as reaching out to the millions of Americans who are eligible for coverage but not yet insured.

Counihan said he’s optimistic that it can be done. “People understand intuitively that having people uninsured is not right for them or right for the country,” he said. “Now, how we go about doing it — people can debate and there can be solid policy differences.  But I’m fundamentally very optimistic that, even though there are some big ideological schisms, that those can be bridged.”

Counihan’s exchange excelled at marketing Obamacare insurance — taking the pitch to Lil Wayne concerts, jazz festivals and a storefront on a city street. And he credits some of that success to the pool of executive talent he was able to draw on in Hartford, an insurance capital.

Counihan is the second high-profile addition to the healthcare.gov second year team. Earlier this summer HHS brought on Andy Slavitt, who helped fix the site’s initial problems as an executive with contractor Optum.

Counihan may have caught the president’s attention a year or so ago during a conference call with the leaders of the state-based exchanges. Counihan recalls talking to the president about the marketing event at the Lil Wayne concert: “And he said, ‘Lil Wayne.  I’ve never been to a Lil Wayne concert.’  And I said, ‘Well, Mr. President, neither [had] I, and I don’t think I’m exactly in the target demographic.'”

Later in the meeting, another exchange official from a different state talked about advertising their state’s exchange on coasters at bars. “My counterpart in that state had said that she felt too old or embarrassed to actually go into bars to see if it’s working,” Counihan said. “At which point the president said, ‘Well, if Kevin can go to a Lil Wayne concert, you certainly should be able to go to a bar.'”