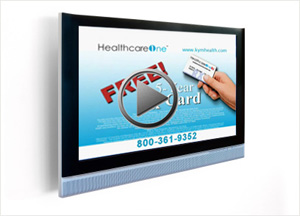 Click on image to play video: HealthCare One’s nationally televised commercial claims a network of more than 900,000 doctors and hospitals. The ad warns consumers to act quickly as they “will only accept 650 registrants a day.” This video was obtained by the California Department of Managed Healthcare before it filed a cease and desist order against the company.

State regulators are cracking down on a health care product that targets the growing group of uninsured and underinsured Americans: the discount health plan.

In discount health plans, consumers pay either a monthly or annual fee to get access to a network that is supposed to offer reduced charges for doctor visits, prescription medication and other medical services, such as eye glasses.

Unlike traditional insurance, consumers in a discount plan pay all medical costs up front, minus whatever discount has been negotiated with the plan. The companies often advertise networks that number hundreds of doctors and savings of 10 to 60 percent. To get the discount, patients have to use providers honoring the plan.

But advocacy groups say consumers are frequently confused because the discount health plans blur the distinctions between their benefits traditional insurance plan coverage.

In addition, some of the discount plans are not legitimate, consumer advocacy groups say. They don’t meet all their advertising promises and their networks turn out to be hollow lists with few providers.

“Oftentimes these are just schemes to commit fraud,” Kansas Insurance Commissioner Sandy Praeger said. Sometimes consumers think they are buying a traditional insurance plan, only to receive a discount card in the mail, according to Praeger.

Unemployed, Uninsured and Out of Options

Authorities in California began taking action against some of these unscrupulous companies. Linda Andlovec, 60, was one of the customers who told her story to the state about her interaction with a discount health plan. In February 2009, the office worker got a phone call from Easy Life Healthcare. A few days before, her employer — a small business in Foresthill, Calif. — had announced it would be dropping employee health care coverage to try to cut costs in the recession.

The Easy Life salesperson was offering a special deal, Andlovec recalled: For $96 a month, the workers in Andlovec’s office could join a health plan with benefits that included free prescription drugs. If Andlovec didn’t like it, she could cancel and get her money back. The salesperson said the Arizona company also had agreements with thousands of California doctors in their network.

“I was scared but I was kind of frantic,” said Andlovec, who has high blood pressure and used at least three prescription medications regularly. So she used her debit card to pay $100 for the membership fee and $96 for the first month.

But as Andlovec soon found out, she was buying a discount health plan, not a traditional health insurance policy. She called to cancel as soon as she realized that the Easy Life plan would not cover her doctors’ appointments, medical treatments or drug expenses. Even so, she lost her $100 membership fee and didn’t receive a refund on the rest until June of last year. When her company went bankrupt last September, she was left unemployed, uninsured and out of options.

For years, discount health plans fell into a dead-zone of regulation. Since they aren’t insurance, they generally couldn’t be regulated by insurance commissioners. In the past few years, though, consumer complaints have forced state officials to take notice and begin to make regulation possible.

“The problem is that oversight is so spotty and often barely existing, that the marketplace has become a kind of Wild-West frontier,” said James Quiggle, spokesperson for the Coalition Against Insurance Fraud, a Washington, D.C.-based watchdog group.

California has been among those states to step-up regulation after repeated complaints like Andlovec’s. The state’s Department of Managed Health Care, the first of its kind in the country, has taken the reins of regulating the discount plans because the insurance commissioner could not.

DMHC Director Cindy Ehnes said her department in February ordered Easy Life and its parent company, HealthCare One, LLC, to stop operations in the state. The DMHC said that the company was operating illegally in the state without a license, as well as misleading California customers and misrepresenting the products they were selling as health insurance instead of a discount card. The lawyer representing Healthcare One, LLC, Craig Zimmerman, had no comment about Easy Life’s operations in California.

Ehnes’ department has received more than 1,000 complaints about discount health plans since beginning an investigation of the products in 2004 and has ordered 18 discount health plan companies to cease operations in the state or get licensed. Downturns in the economy and rising insurance premiums have caused many consumers to lose or give up their traditional health coverage, creating a market in the state, she said.

“Many more Californians have been looking for a way to afford medical care and these plans offer themselves as solutions,” Ehnes said. But, she added, the state’s investigation of plans selling in California found that “many, if not most, were offering benefits that were deceptive and misleading.” Just five discount plans have been licensed in the state, only one of which offers medical services. The other four plans are all dental providers. To be licensed, the provider networks and discounts offered by the company must be verifiable and all fees must be refundable minus a registration fee of $15 maximum, among other requirements.

In Minnesota, the state attorney general has sued several discount plans for deceptive marketing. Other states, such as Oklahoma and Kansas, have established legislation that allows their insurance commissioners to regulate the plans.

Yet officials seeking to crack down on misleading practices face some of the same confusion that many consumers do, especially when trying to figure out who is running a company. For example, the company that called Andlovec and her co-workers, Easy Life Healthcare, is just one part of Healthcare One, LLC. And according to the Texas Department of Licensing and Regulation, Healthcare One is a private label marketer that sells the plans provided by another company, Careington International Corp. of Dallas. The fine print of the Healthcare One website lists the “administrator” of its product as Careington International.

Zimmerman had no comment on the relationship between the two companies. Calls to Careington International were not returned.