Consumer advocacy group Public Citizen on Thursday called on 20 hospital systems to stop partnering with companies that offer low-cost screenings for heart disease and stroke risk, saying the promotions are “unethical” and the exams are more likely to do harm than good. 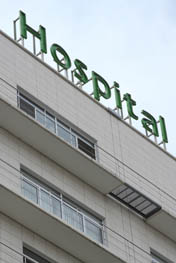 In recent years, more hospitals have paired with firms offering such testing packages, partly to build community goodwill and referrals.  Hospitals say residents benefit from the testing packages, which can cost less than $150, because some will discover they are at higher risk for heart problems or stroke early enough to take steps to reduce their risks.

But some medical groups and consumer advocates object to the programs, saying they are a waste of money for most consumers.

Public Citizen argues “the promotions rely on fear mongering and erroneously suggest that for most adults in the general population, these screening tests are useful in the prevention of several potentially life-threatening cardiovascular illnesses.”

It sent letters to hospitals in eight states, including Inova in the Washington, D.C. area, Scottsdale Healthcare in Arizona, Dignity Health in California and the University of Iowa Health Alliance, urging them to stop promoting such tests.

The programs are advertised on websites, in newspapers or through direct mail. Screenings — often performed in specially equipped buses — include  ultrasound tests for blockages of the carotid artery and weak spots in the abdominal aorta, a resting electrocardiogram, or EKG, a test of elasticity of the arteries and another for blockages in arteries serving the legs, a condition called peripheral arterial disease.

What the promotions don’t say, generally, is that most of the tests are not recommended for people without risk factors or symptoms.  Widespread screening of people without the risk factors could lead to misleading results and potentially even unnecessary surgery. Other medical experts warn that the tests could needlessly raise health-care spending.

Patrick T. O’Gara, the president of the American College of Cardiology, said consumers are right to raise questions about the value of some screenings , noting the specialty group offers recommendations to physicians to guide them in making decisions with patients about their risk for heart attack and stroke.

“Other than assessing blood pressure and serum cholesterol, being attentive to diabetes and promoting a healthy weight with regular exercise, we do not recommend broad and untargeted screening,”  he said. “Decisions about the need for additional testing should be based on each patient’s circumstances.”