Consumers in most states can start the process of enrolling in Obamacare today — but they won’t be able to compare health insurance prices or buy coverage in the new federally run insurance online marketplaces until Oct. 1, administration officials said Monday. 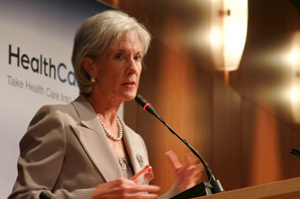 People in the 34 states relying on a federal insurance exchange can go to healthcare.gov starting today to open a personal account — the first step to buying coverage that would take effect Jan. 1. (Sixteen states and the District of Columbia are setting up their own online marketplaces, and several have already released pricing information although enrollment does not begin until Oct. 1.)

To set up the personal account, users enter some basic information such as state of residence, age and whether they are eligible for coverage through their employer.

The administration is hoping to draw more interest in the new insurance options by letting people begin the enrollment process now.

“We are on target and ready to flip the switch on Oct. 1,” Health and Human Services Secretary Kathleen Sebelius said during a telephone briefing with reporters.

Sebelius said reports from several states that premiums will soar “are not accurate.” She did not name the states but insurance commissioners in Florida and Ohio have said average rates will increase at least 30 percent to 40 percent next year and blamed the federal health law, which requires insurers to sell to everyone and prohibits plans from charging more to those with pre-existing medical conditions.

States were required to submit their insurance rates to HHS for final review by July 31. HHS plans to sign contracts with insurers in the federally fun marketplace by early September.