When setting premiums for next year, insurers baked in bigger-than-usual adjustments, driven in large part by a game-changing rule: They can no longer reject people with medical problems.

Popular in consumer polls, the provision in the health law transforms the market for the estimated 14 million Americans who buy their own policies because they don’t get coverage through their jobs. Barred from denying coverage, insurers also can’t demand higher rates from unhealthy people and those deemed high risks because of conditions including obesity, high blood pressure or a previous cancer diagnosis. 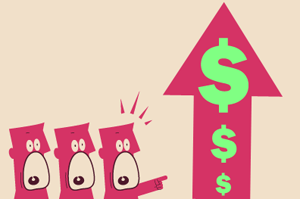 But the provision also adds costs. To a larger degree than other requirements of the law, it is fueling the “sticker shock” now being voiced by some consumers about premiums for new policies, say industry experts.

In setting next year’s rates, insurers must factor in “assumptions about who will sign up, high users or healthy people,” said David Axene, a fellow of the Society of Actuaries. “You can imagine who most of the health plans thought would be predominantly signing up.”

Regulatory filings and comments from insurers show they expect that accepting the sick as well as the healthy could raise their claims costs 5 percent to 50 percent or more next year.  That “would be the largest single factor” at Blue Shield of California, accounting for about a 20 percent increase in expected claims costs, said Mike Beuoy, director, actuarial services.

The focus on premiums has heightened in recent days, amid news reports about large numbers of individual policyholders nationwide who are learning that their current plans are being discontinued and they must choose a new policy.

To be sure, there are other factors affecting premium cost changes. For one, the law requires insurers include 10 benefits deemed essential by the law, including hospitalization, drugs, maternity care and mental health services, benefits not all plans sold to individuals currently include. Indeed, this is one of the major reasons insurers cite for discontinuing policies. Another provision caps consumers’ annual out-of-pocket costs to no more than $6,350 for individuals or $12,700 for families, which could add to premiums as well.

Insurers must also charge men and women equally – and are limited to charging older Americans no more than three times what younger policyholders are charged, considerably less than they could before in many states.

Altogether, those changes for some consumers may mean a sharp increase in premiums between their soon-to-be discontinued policies and new ones being offered them by insurers, even for similar plans.

“I’m kind of shocked,” said Leo Lenaghan, who lives in the Chicago suburbs. The $336-a-month BlueCross Blue Shield policy for his wife and daughter, which had a $2,250 per person annual deductible, is being discontinued and the plan his insurer says is most similar to it in benefits will cost an additional $205 a month. It has a $3,000 per person deductible. “I guess we’re just going to have to suck it up.”

Still, despite the factors that can drive up premiums – including medical inflation – not all consumers will see higher prices.  Health law rules mean people who are older and sicker may see a drop from what they’re paying now. And about half of consumers who currently buy their own policies will be eligible for a subsidy to help offset the premium cost, according to a study released in August.

BlueCross BlueShield of Illinois would not comment specifically on Lenaghan’s situation, but spokeswoman Lauren Perlstein said that the health law will “expand access to health care coverage for millions and may offer additional benefits for many [and] … the impact on premiums may vary widely.”

The changes make the so-called  individual market more comparable with the way insurers price and offer coverage to employers, where rules have long been in place barring them from rejecting employees with health conditions.  Employer coverage also generally covered more benefits with lower deductibles and fewer restrictions than policies purchased by individuals, who sometimes did not realize the limits of their coverage.

“We as consumers may not know just how lacking our current policies are because it seemed like a good value and we didn’t use it much,” said Michael Lujan, a health benefits consultant and former director of sales and marketing for Covered California, the state’s new online marketplace.

The less their policies covered previously, the more consumers’ premiums are likely to rise, experts say. While adding some benefits only costs “pennies on the dollar,” said Georgetown University research professor Sabrina Corlette, others are more expensive.  A Maryland Health Care Commission report from last year, for example, said the state’s requirement that insurers include maternity coverage added about 4 percent to the cost of a premium.

The actuarial firm Milliman estimated that changes from the health law – including the take-all-applicants provision – could be expected to result in about a 14 percent increase to the average premium in California.  On top of that, general medical inflation from 2013 to 2014 would add another 9 percent. Of all the factors, the biggest cited by Milliman was the guaranteed coverage provision.

Actuaries say the impact of that provision on premiums is unlikely to recur in future years because insurers are factoring in this cost now, based on projections of the ratio of sick to healthy customers.  “Once it’s built in, unless they were wrong, it won’t be repeated,” said Axene.

But insurers’ estimates may be off. Troubles with the federal website and some state sites may discourage enrollment by younger or healthier people who see less incentive to buy coverage. “All insurers I talk with are absolutely terrified,” said Brian Haile, senior vice president, health care policy at tax preparation firm Jackson Hewitt.  “They made assumptions about the number of young people entering the market … which may now be overly optimistic.”

Brady Cass, president of Asuris Northwest Health in Washington State, said only time will tell. Asuris, a subsidiary of Regence BlueShield of Washington, estimated that the requirement that they take all applicants will add about 8 percent to the cost of next year’s premiums.

“Did we overshoot the runway or come up short?  Only way to get there is to get to the end of runway and look back,” said Cass. “The hope is the actuary team has done a very good job at predicting the risk mix coming in.”

If they underestimated, premiums might rise more in future years, he said. If they overshot, some consumers might see a rebate, as required by the health law. Asuris is getting a lot of calls from people wondering why, if they’re healthy, that they have to pay more to cover those who are not.

“It’s the many helping the few,” he said, likening it to buying home owners insurance and paying in year after year, money that goes to help other people whose homes burn down. “That’s the concept of insurance, lots of people coming together to help those in time of need.”

Popular Provision Of Obamacare Is Fueling Sticker Shock For Some Consumers