Americans with health coverage – including those who buy it through government insurance exchanges and Medicare beneficiaries – are likely to pay more out-of-pocket next year for so-called “specialty drugs,” which treat complex conditions, according to two studies from consulting firm Avalere Health.

More than half of the “bronze” plans now being sold to individuals through federal and state marketplaces for coverage that begins in January, for example, require payments of 30 percent or more of the cost of such drugs, Avalere said in a report out Tuesday. That’s up from 38 percent of bronze plans this year.

In “silver” level plans, the most commonly purchased exchange plans, 41 percent will require payments of 30 percent or more for specialty drugs, up from 27 percent in 2014. 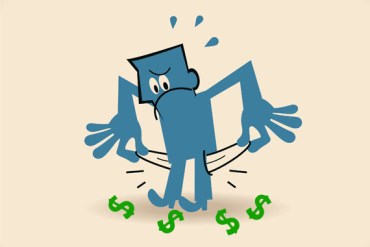 As the cost of prescription medications rise, insurers are responding by requiring patients to pay a percentage of specialty drug costs, rather than a flat dollar amount, which is often far less. Insurers say the move helps slow premium increases.

But “in some cases this could make it difficult for patients to afford and stay on medications,” Avalere CEO Dan Mendelson said in a written statement.

While there is no standard definition of such drugs outside of the Medicare program, they are often expensive medications used to treat serious, chronic illnesses, such as multiple sclerosis, rheumatoid arthritis, hemophilia, some cancers and hepatitis C. While lists of specialty drugs can differ by insurer and by policy type, drugs can include arthritis treatments Enbrel and Humira, cancer drugs Gleevec and Tarceva, hepatitis C treatment Sovaldi and MS drugs, Betaseron and Copaxone.

While they add up to only about 1 percent of all prescriptions written, specialty drugs account for 25 percent of spending on all drugs – an amount expected to rise rapidly, according to various studies.

An earlier Avalere analysis found that for the first time since Medicare’s drug program began in 2006, all of the stand-alone drug insurance plans place some drugs into specialty “tiers.” Two thirds of those plans require patients to pay a percentage of the costs of drugs in those tiers, rather than a flat dollar payment.  Medicare plans can place a product into a specialty category only if the price negotiated with the drugmaker exceeds $600 a month.

Increasingly, health plans –including those offered to people with job-based coverage – require hefty payments, sometimes 20 to 40 percent or more of the total cost of medications that insurers classify as specialty drugs.  That’s a change from the flat dollar payments of $10 to $30 or $50 that many patients have become accustomed to for other types of drugs. 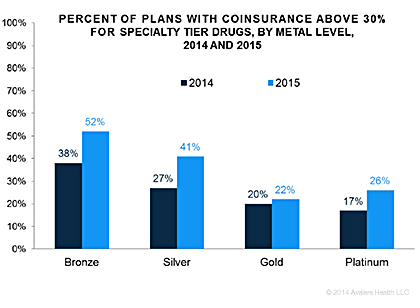 There is a limit to how much patients must pay, but it’s often high: Most policies have an annual out of pocket maximum, which is often several thousand dollars.

The new Avalere study looked at plans sold in the federal exchange and in New York and California, which run their own marketplaces.