The Supreme Court’s decision Monday saying that “closely held corporations” do not have to abide by the contraceptive coverage mandate in the Affordable Care Act may not give those firms the ability to stop providing that coverage after all. 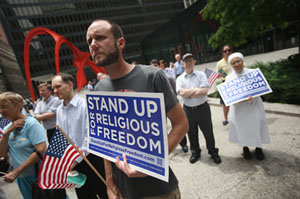 More than half the states have “contraceptive equity” laws on the books that require most employers whose health insurance covers prescription drugs to also cover FDA-approved contraceptives as part of that package. Unlike the ACA, those laws do not require that coverage to be available without deductibles or co-pays.

The Religious Freedom Restoration Act, which the court used to say the closely held companies don’t have to abide by the federal mandate, “doesn’t supersede state law,” said Marcia Greenberger, co-president of the National Women’s Law Center.  “They stand as independent protections.”

Many of those state laws have religious exceptions similar to the one the Obama administration has granted to nonprofit religious hospitals and universities, but only two, Arizona and Illinois, extend those exceptions more broadly. Two other states, Arkansas and North Carolina, do not require coverage of emergency contraception, which is among the products that were at issue in the Supreme Court case.

Firms like Hobby Lobby, the nationwide arts-and-crafts chain that was the lead plaintiff in Monday’s case, aren’t subject to state insurance laws, because they self-insure their workers and don’t buy state-regulated insurance. Their plans are subject only to federal regulation.

But they are still likely subject to a ruling issued by the Equal Employment Opportunity Commission in the year 2000 that employers that fail to cover contraception as part of their health insurance benefit package are discriminating against women in violation of the 1978 Pregnancy Discrimination Act. That law was itself an amendment to the 1964 Civil Rights Act.

So what happens now? “It depends,” said Brigitte Amiri, senior staff attorney at the ACLU.

Employers that don’t want to offer some or full contraceptive coverage could sue to block the state contraceptive laws, “but that would be harder given how long some of those laws have been in effect,” she said.

Meanwhile, others have suggested that female employees of Hobby Lobby or other companies that stop offering contraceptive coverage could turn back to the courts for relief themselves, charging gender discrimination.

“There will be no shortage of exciting moments in the coming months,” said Amiri.