As he raced through the U.S. Capitol this fall, Dr. Richard “Buz” Cooper, a 73-year-old University of Pennsylvania medical school professor, didn’t mince words. He denounced as “malarkey” a reigning premise of the health care debate — that one-third of the nation’s $2.5 trillion in annual health spending is unnecessary — and said that the idea came from “a bunch of clowns.”

The harsh language underscores Cooper’s disdain for highly regarded work — as close to a sacred cow as anything in health care — developed over two decades by the Dartmouth Atlas of Health Care. The work by Dartmouth Medical School researchers shows huge geographic variations in the amount of care that hospitals and doctors provide, with spending in some areas running three times as much as in others. Dartmouth argues much of the high spending is due to extra procedures and tests that often don’t help patients, but bring in more money for doctors and hospitals. 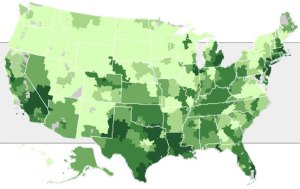 “The Crisis of Physicians Supply and the Myths of Health Care Reform” (.pdf)

The argument has been embraced by President Barack Obama’s administration and several lawmakers, who have repeatedly said that the nation could save as much as $700 billion a year — if only doctors and hospitals in high-spending areas, such as Philadelphia, Los Angeles and Chicago, would end their profligate practices and adopt the thriftier ways of say, the Geisinger Health Systems, based in Danville, Pa. The House has inserted provisions in the health bill that could punish high-spending hospitals in Philadelphia and elsewhere, while rewarding low-spending facilities in places such as Albuquerque, N.M., Madison, Wis., or Portland, Ore.

But Cooper and some allies say that would be a disaster and hurt efforts by doctors and hospitals to care for the poor. Cooper says the Dartmouth research doesn’t take into account the high cost of helping the impoverished, who often spend more time in hospitals because they don’t have people to care for them at home and often return to the hospital when they can’t afford needed medications.

“There is abundant evidence that poverty is strongly associated with poor health status, greater per capita spending, more hospital readmissions and poorer outcomes,” he wrote in an Oct. 24 post on his blog. “It is the single strongest factor in variations in health care and the single greatest contributor to ‘excess’ spending.”

“Don’t say our failure is that medicine is bad in Mississippi and the South Bronx,” Cooper adds in an interview. “That’s a social problem. We’re bad because we don’t spend enough in areas of poverty.”

Cooper is emerging as the most provocative voice among a small group of health care experts raising doubts about Dartmouth’s methods, which focus on comparing how hospitals treat Medicare patients in their final two years of life. It is from those studies that Dartmouth came to its most far-reaching conclusion: that too much medical care can actually hurt patients rather than help them. But the skeptics say the way hospitals treat Medicare patients can’t be translated into firm conclusions about the country’s overall health spending and trends.

Dartmouth researchers say that Cooper is flat-out wrong. They say that even when you take the socio-economic levels of patients and sicker populations into account, some hospitals spend far more than others without good reason. And they say their studies show Medicare spending is a good indication of how hospitals generally operate.

“It’s impossible to carry on a debate with somebody who does not understand statistics, and seems uninterested in learning,” Jonathan Skinner, a senior author of the Atlas, says of Cooper.

Other critics of Cooper – and there are many – say he has not offered a better way to analyze spending variations among hospitals, but instead takes potshots. They say he tends to embrace data that back up his long-held view that the country needs more doctors, and is too eager to flout professional customs. In December, he was banned from writing for the journal Health Affairs for five years for breaking a rule against sharing articles before publication.

The counterattacks haven’t slowed Cooper down. These days, he’s working with several Democratic members of Congress, including Rep. Allyson Schwartz, D-Pa, whose district includes parts of Philadelphia, and Rep. Shelley Berkley, D-Nev. Cooper’s criticisms are also being cited by the lobbyists for the nation’s teaching hospitals and some state hospital associations, including New York’s. All are trying to ensure the health overhaul bills don’t lead the government to unfairly penalize high-spending parts of the country.

“Our institutions are barely getting by,” says Atul Grover, chief advocacy officer at the Association of American Medical Colleges. “They’re struggling to take care of people who can’t get care anywhere else, and now they’re talking about cutting them, saying they’re inefficient.”

Hospitals in the greater Philadelphia area certainly have reason to worry. Overall, the region’s hospitals billed Medicare $66,974 on average for patients in the last two years of life, according to the most recent Dartmouth data, covering the years 2001 through 2005. That was 25 percent above the state average of $53,373, and 27 percent above the national average of $52,838.

The highest-spending hospitals – such as Temple University Hospital, which Dartmouth says spent $85,538 on the average Medicare patient for the period – say they provide more treatment because their patients are poor and enter Medicare with greater health problems. A Temple spokeswoman says they treat more Medicaid patients than any other hospital in the state. Teaching hospitals in the city note that under Medicare rules they get paid extra.

“Our costs are higher because we have more technology, we have a wider range of programs,” says Ralph Muller, chief executive officer of the University of Pennsylvania Health System, which spent $80,727 on Medicare patients in their final two years of life. “When you adjust for a teaching hospital, a lot of the variation goes away.”

Dartmouth researchers counter that they have compared hospitals with similar patients’ populations and still found wide differences in spending.

“There are a lot of people and a lot of hospitals, particularly in big cities, that feel threatened by the message of the Dartmouth Atlas,” says Skinner. “For them to find a spokesperson who is absolving them of all sin is very appealing to them.”

So who’s right? To help find an answer, the House health overhaul legislation would direct the prestigious Institute of Medicine to research the causes of geographic variations. The institute then would recommend how Medicare can best identify and clamp down on regions where the spending is unjustifiably high. In a partial victory for Cooper and his allies, the bill requires that the institute take into account “socio-economic factors” as well as the health status of patients.

Other researchers’ work is raising questions about Dartmouth’s conclusions. A recent study published in Circulation, the journal of the American Heart Association, followed patients at six California teaching hospitals who had been hospitalized for heart failure. The study found that those who received more treatment from the hospital — through procedures, tests or days as a patient — were more likely to survive than those who got less medical care.

Dan Mendelson, president of Avalere Health, a consulting firm in Washington, says some low-spending hospitals may be providing insufficient care, while higher spenders may be giving the needed amount. “What the Cooper analysis does is show why it’s so difficult to change the system,” says Mendelson, a top health budget expert in the Clinton administration.

But many of the nation’s most prominent health economists, including Princeton University’s Uwe Reinhardt and Harvard University’s David Cutler, argue there is substantial variation among hospital spending even when the special needs of high poverty areas are fully analyzed.

“I have yet to meet anyone who really plays around in the health care system who really thinks there’s less than 20 percent waste,” says Cutler, who advised Obama during his presidential run.

More answers are coming. The Medicare Payment Advisory Commission, an independent congressional agency, is performing its own analysis. Early on, it has found that regional spending differences persist even after patients’ health is taken into account. But the disparities are not as wide as Dartmouth’s.

“Before Dartmouth came along, nobody measured anything,” says Skinner. “We did use the methods we thought would work the best, given our very scarce resources. Are they the best measures? No. Are there better measures? Yes. But there is certainly information in these measures that cannot be denied by the people who want to deny them.”

Ultimately, Cooper may be vindicated not for his denunciations of Dartmouth, but for being an early, vocal doubter that the government can pinpoint excessive health care spending with enough precision to justify paying doctors and hospitals less.

“The thing with Buz Cooper is he does raise significant and important issues that challenge the status quo’s thinking and conventional wisdom and he should always be taken seriously,” says Reinhardt, the Princeton economist. “If he goes around the Hill and says, ‘Don’t cut Florida and don’t cut Louisiana and Texas until you know more,’ I would be on his side with that one. If he totally belittles the (Dartmouth) work, I think that would be totally wrong.”