Opioid addiction isn’t taking a break during the coronavirus pandemic.

But the U.S. response to the viral crisis is making addiction treatment easier to get.

Under the national emergency declared by the Trump administration in March, the government has suspended a federal law that required patients to have an in-person visit with a physician before they could be prescribed drugs that help quell withdrawal symptoms, such as Suboxone. Patients can now get those prescriptions via a phone call or videoconference with a doctor.

Addiction experts have been calling for that change for years to help expand access for patients in many parts of country that have shortages of physicians eligible to prescribe these medication-assisted treatments. A federal report in January found that 40% of U.S. counties don’t have a single health care provider approved to prescribe buprenorphine, an active ingredient in Suboxone.

A 2018 law called for the new policy, but regulations were never finalized.

“I wish there was another way to get this done besides a pandemic,” said Dr. David Kan, chief medical officer of Bright Heart Health, a Walnut Creek, California, company. It has recently started working with insurers and health providers to help addicted patients get therapy and medications without having to leave their homes. He said he hopes the administration will make the changes permanent after the national emergency ends.

For years before the emergency regulations, Bright Heart — along with several other telemedicine counseling providers — began offering opioid addiction treatment and counseling via telemedicine, even if they couldn’t prescribe initial medication for addiction. Patients can renew prescriptions for drugs to deal with withdrawal symptoms, get drug-tested and meet with counselors for therapy.

When Nathan Post needed help overcoming a decade-long drug addiction, he went online in 2018 and used Bright Heart Health to connect to a doctor and weekly individual and group counseling sessions. He said the convenience is a big benefit.

“As an addict, it was easy to have excuses not to do stuff, but this was easy because I could just be in my living room and turn on my computer, so I had no reason to blow it off,” he said.

Post, 38, a tattoo artist who recently moved from New Mexico to Iowa City, Iowa, was addicted to Suboxone, the drug he was prescribed in 2009 to deal with an addiction to opioid pills.

Officials with the insurer Anthem said using Bright Heart’s telemedicine option has helped increase medication-assisted treatment for members with opioid drug abuse issues from California and nine other states from 16% to more than 30%. While fewer than 5% of Anthem patients seeking addiction treatment use telemedicine, the company expects the option to become more common.

Bright Heart Health officials say one barometer of the effectiveness of the care is that 90% of patients are still in treatment after 30 days and 65% after 90 days — far higher than with traditional treatment.

Several insurers — including Aetna, and Blue Cross and Blue Shield companies like Anthem across the country — have begun covering the telemedicine addiction service.

“I think therapists and providers do worry whether it provides the same level of engagement with the patient and whether it’s possible to gauge someone’s sincerity and level of motivation as easily over a camera as in person,” she said.

But she predicted telemedicine service will grow because of the tremendous need to broaden access to mental health and addiction counseling. “Too often the default is no counseling for patients,” she said. “This gives us another set of tools.”

Patients can also have trouble finding a doctor who is eligible to prescribe medication to help treat addiction. Physicians are required to get a federal license to prescribe Suboxone and other controlled substances that help patients with opioid addictions and can write only limited numbers of prescriptions each month. Many doctors hesitate to seek that qualification.

A few small studies have found that patients are as likely to stay with telemedicine treatment as with in-person care for drug addiction. But no studies have determined whether one type of therapy is more effective.

Telemedicine does have its limits — and is not right for everyone, particularly patients who require more intensive inpatient care or who lack easy internet access, Komaromy said.

Premera Blue Cross and Blue Shield officials said they are partnering with Boulder Care, a digital recovery program based in Portland, Oregon, to help customers in rural Alaska. “Telemedicine is a unique way for someone to go through treatment in a discreet manner,” said Rick Abbott, a Premera vice president. 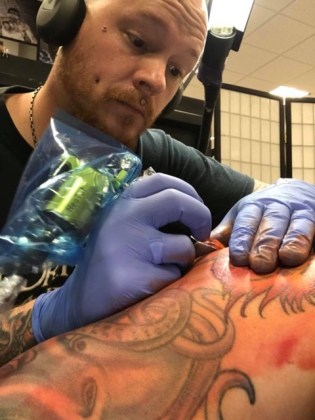 Nathan Post, a tattoo artist living in Iowa City, Iowa, used a telemedicine service to help overcome his addiction to Suboxone. “This was easy because I could just be in my living room and turn on my computer, so I had no reason to blow it off,” he says. (Courtesy of Nathan Post)

While telemedicine has been growing in popularity for physical medicine, some people may still be reluctant to use it for drug addiction.

There are also concerns that allowing providers to prescribe controlled substances without meeting patients in person could increase the risks of fraud.

“There is a fear around this that there may be some rogue providers who make a lot of money off addiction and will do it stealthily on the internet,” said Dr. Alyson Smith, an addiction medical specialist with Boulder Care. “While that is a small risk, we have to compare it to the huge benefit of expanding treatment that will save lives.”

Smith said she doesn’t notice a big difference in treating patients for drug addiction in her office compared with on a video screen. She can still see patients’ pupils to make sure they are dilated and ask them about how they are feeling — which can determine whether it’s appropriate to prescribe certain drugs. Dilated pupils are a sign of patients suffering from withdrawal from heroin and other drugs.

Dr. Dawn Abriel, who treated Post and previously directed a methadone clinic in Albuquerque, New Mexico, said she can diagnose patients over video without issue.

“I can pick up an awful lot on the video,” particularly a patient’s body language, she said. “I think people open up to me more because they are sitting in their homes and in their place of comfort.”

In West Virginia, one of the states hardest hit by the opioid addiction epidemic, Highmark, a Blue Cross and Blue Shield company, started offering telehealth addiction coverage with Bright Heart Health in January. Highmark officials say a lack of providers, particularly in rural parts of the state, meant that many of the insurer’s members had difficulty finding the help they need.

Dr. Caesar DeLeo, vice president and executive medical director of strategic initiatives for Highmark, said the insurer was having problems getting customers into care. Only about a third of members with addiction issues were receiving treatment, he said.

“We needed to address the crisis with a new approach,” DeLeo said. “This will give people more options and give primary care doctors who do not want to prescribe Suboxone another place to refer patients.”

Dr. Paul Leonard, an emergency doctor and medical director for Workit Health, an Ann Arbor, Michigan, company offering telemedicine treatment and counseling programs, said many patients who turn to ERs for addiction treatment get little help finding counseling. With online therapy, patients can sign up while still in the ER.

Telemedicine addiction providers said they and their patients are getting more accustomed to virtual care.

“There are always times you wish you could reach out and hold someone’s hand, and you can’t do that,” said Boulder’s Smith. “But we feel like we are more skilled at a virtual hand-holding and really connect with people and they feel well supported in return.”

[Correction: This article was updated on April 28 at 10:40 a.m. ET to correct an error in the time frame for reporting Bright Health’s statistics about the program’s effectiveness. The company said that 90% of patients are still in treatment after 30 days and 65% after 90 days.]