After several years of modest increases, American spending on medications is projected to shoot up by 12 percent this year, pushing the nation’s drug bill to between $375 billion and $385 billion, according to a report by the IMS Institute for Healthcare Informatics.

Several factors are driving the spending spike, including the introduction of expensive new hepatitis C drugs and fewer drug patent expirations than in previous years, the report found. Such expirations typically lead to savings as cheaper generics replace brand-name drugs.

The 11.7 percent rise is a dramatic departure from the more modest average increases of 3.6 percent in annual drug spending during the past five years. 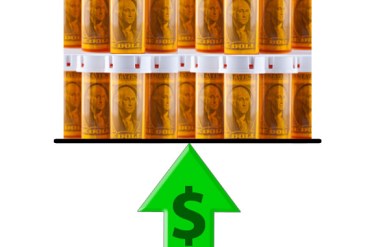 The report anticipates the pace of spending increases will slow to 7 to 9 percent in 2015, as the impact of the new hepatitis C drugs declines, less expensive biosimilar products become available and several brand-name drugs — such as cancer drug Gleevac and the antipsychotic Abilify — are replaced by generics.

“We expect this bubble of innovation around hepatitis C will pass, so we won’t see such a contribution to growth in outer years,” said Murray Aitken, executive director of IMS Health. “We think the spike in growth will moderate next year, and further moderate in 2016.”

An estimated 3 to 4 million Americans have hepatitis C and are potentially eligible for treatment. Hepatitis drug treatments accounted for $8 billion of the approximately $40 billion in projected increased drug spending this year.

“The hepatitis C drugs are Exhibit A when you look at escalating drug costs,” said Brian Henry, a spokesman for Express Scripts, the country’s largest pharmacy benefits manager. “You never had a drug that costs that much that can treat so many people.”
The price of Sovaldi “caught payers by surprise,” he said.

Innovative new therapies, especially in the area of cancer, have also pushed up costs. The Affordable Care Act, which expanded access to health care and medications, may also have played a role, along with a new emphasis on preventive care and adherence to medications, Aitken said.

Holly Campbell, director of communications for the drug industry trade group, PhRMA, said the cost of developing drugs has skyrocketed, pointing to a report this week by the Tufts Center for the Study of Drug Development that estimated the price of bringing a drug to market at $2.6 billion. The process can take a decade, the report said.

“These most recent findings underscore the ongoing challenges our industry faces,” Campbell said.

An AARP report noted the increase in prices of brand-name drugs. The report found that the prices of 227 brand name prescription drugs used by many older Americans increased by 12.9 percent on average last year, well above the 1.5 percent rate of inflation, bringing the average cost of a brand-name drug used regularly to $3,000.

“We have started to hear from members who have to decide between taking a drug they need and paying their electric bill,” said Leigh Purvis, director of health service research at the AARP Public Policy Institute and a co-author of the report.

But, she added, the impact goes beyond seniors. “This is a concern not just for our members but for everyone.”