Health reform advocates and Democrats in Texas are reacting to Gov. Rick Perry’s vow to turn down both the Medicaid expansion and health insurance exchange mandated in the federal health law.

Anne Dunkelberg of the left-leaning, Austin, Texas, think tank Center for Public Policy Priorities said that the Legislature will get to vote on whether the state starts work on its own exchange when it meets in January. She is hoping public outcry could help override a Perry veto or even change the governor’s mind.

“It concerns us deeply that this position is being taken and no solutions are being put forward to do anything about the 6.2 million uninsured Texans,” Dunkelberg said. “[Texas] would be leaving $76 billion dollars in federal funds on the table, funds that will go to other states that do exercise the Medicaid expansion.”

Perry’s opponents would likely have a tough fight in January to get the state to do its own exchange, since both houses of the Legislature are Republican controlled.

But Dunkelberg argues that turning down the exchange will create political problems for Perry.

“As the governor knows, there will be a federally operated exchange in every state that doesn’t create its own,” she said. “The exchanges were the most popular reforms that the public supports so strongly in every poll, even Republicans.” 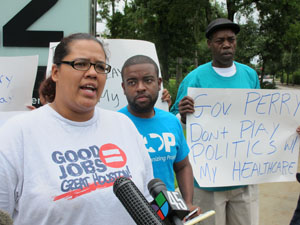 Marta Soledad, 29, speaks in favor of expanding Medicaid to more uninsured Texans. She is joined by Durrel Douglas, center, of the Texas Organizing Project and Kenneth Walker, who also spoke at the rally (Photo by Carrie Feibel/KUHF).

Perry doesn’t see it that way. In a letter to HHS Secretary Kathleen Sebelieus, the governor wrote: “Neither a ‘state’ exchange nor the expansion of Medicaid under the Orwellian-named [Patient Protection and Affordable Care Act] would result in better ‘patient protection’ or in more ‘affordable care.’ What they would do is make Texas a mere appendage of the federal government when it comes to health care.”

State representative Garnet Coleman, a Houston Democrat, says Perry is being hypocritica,l since he accepts federal funds all the time, for instance, stimulus funds and disaster funds.

“What is it, is it funny to withhold care from people through a regular doctor?” Coleman said. “Is this something that they get joy out of, or the governor gets joy out of? I hope not.”

On Tuesday, Texas Organizing Project, a left-leaning organization that works on poverty, jobs, and voting issues, held a small rally to protest Perry’s move outside of Ben Taub Hospital, a public hospital in Houston.

Kenneth Walker, 52, a self-employed construction worker who is uninsured, said, “For them to take that away from me before I even get a chance to get it, is crazy,” Walker said at the rally. “I work hard, man, and I don’t have health care. And for this guy to come on national TV and say that he’s going to fight against [the health law], —  he’s not going to allow us Texans to have it — is a slap in our face.”

This story is part of a reporting partnership that includes KUHF, NPR and Kaiser Health News.

Could Grass-Roots Pressure Trigger Change Of Heart In Texas?