What’s going to happen to the federal health law? The quick answer is no one knows. But in the midst of the uncertainty about the Affordable Care Act, states still must govern their insurance markets. Most have been muddling through with the 2017 status quo, but Minnesota is a special case, taking three unusual actions that are worth a closer look.

Here’s more on each item.

Faced with some of the country’s highest hikes on premiums in the individual market — 50 to 67 percent, on average — Minnesota lawmakers passed a bailout for people who earn too much to qualify for the Affordable Care Act’s federal tax credit. The $300 million law will cut monthly 2017 premiums by 25 percent for about 125,000 Minnesotans. 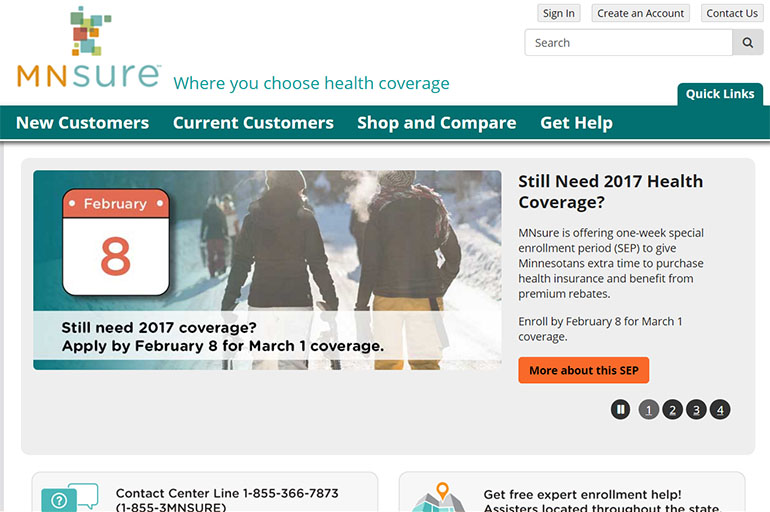 Minnesotans face some of the country’s highest hikes on premiums in the individual market. (Screenshot of MNSure.org)

Democratic Gov. Mark Dayton backed the measure since October when he called the ACA “no longer affordable to increasing numbers of people.” But passage wasn’t assured as both houses of Minnesota’s legislature are controlled by Republicans.

It is thought to be the second time a state has offered up state tax dollars to stabilize an insurance marketplace created by the ACA. (Alaska came up with a $55 million bailout for insurers in 2016.)

A failed amendment to the Minnesota legislation sought to strip dozens of so-called “essential benefits” from health plans with the expectation that slimmed-down coverage would cost less.

Republican State Rep. Steve Drazkowski, who offered the amendment, said he was trying to eliminate the current, “government-controlled, one-size-fits-all, dictating set of mandates.

“What we’re doing is trying to create an environment that, if and when the ACA goes away, that Minnesotans will have the freedoms they need in order to start to bring some free-market competition, some free-market ingenuity and innovation into the health insurance market,” he said.

The laundry list of benefits that consumers could choose to have covered or not under Drazkowski’s amendment included maternity care, diabetes treatment and mental health care among many others. Some items on the list are very specific: Lyme disease, prostate cancer screenings, outpatient surgery.

Dayton and other Democrats opposed the amendment and it dropped out of the final legislation.

Still, it caught the eye of Minnesota native Andy Slavitt, who is the former administrator of the Centers for Medicare & Medicaid Services, which oversee the health law marketplaces. Slavitt, who tweeted about the amendment, said it is a cautionary tale about high-deductible catastrophic plans that cover little or no basic care.

Americans are scared & don't want to go back to pre-existing conditions or "health plans" that look like the new one proposed in MN. 18 pic.twitter.com/z75hyQLnC7

There's no replacement plan for ACA in Congress.

But good news is there is one put forward in a state to look at.https://t.co/bG9D3IWlZd

“Telling people, ‘Only buy what you need,’ implies that people know that they’re not going to need the emergency room or that there’s not going to be an addiction problem in their family,” Slavitt said in an interview. “I don’t think we, as a country, want people to not have access to the services they need.”

He did not dispute the notion that the individual market needs help, but he says offering extremely limited plans is ill-conceived, “gotcha” insurance.

“This is the most blatant one I’ve seen,” Slavitt said of the failed amendment.

But other amendments did get passed, including a provision that changes longstanding laws requiring HMOs, insurance plans that will cover only services provided by their network of doctors and other health providers, to be not-for-profit. The new law allows out-of-state, for-profit HMOs to sell health plans in Minnesota.

Dayton said these measures were not well thought out. “I think it is unnecessary and unwise to rush the ‘reforms’ added to this bill, without proper public review or full consideration of their consequences,” he said.

Minnesota is one of just two states offering a so-called basic health plan that can cover lower and moderate income residents. MinnesotaCare provides subsidized health coverage to about 100,000 state residents, capping eligibility for a family of four at $49,000 in earnings per year. Dayton wants to open the plan to all Minnesotans, with higher income residents paying full price for their coverage.

“This public option could offer better benefits than any policies presently on commercial markets, more options for people to keep their doctors and clinics and less expensive than what is available today,” said Dayton during an announcement of his annual budget plan last week.

Supporters of the “public option” say it could provide better coverage for less cost because the government can leverage its massive buying power to negotiate optimal deals from insurance companies.

Opponents said expanding government’s role in health care is a bad idea. As he campaigned for the presidency, Donald Trump said he opposed a national “public option” because it would drive away private insurers, “leaving Americans with fewer options and eventually no choices but a government-run plan.”

The one-time bailout is just the beginning of what are expected to be broader health insurance reform efforts in Minnesota. Among them is a renewed call for state-sponsored single payer insurance that is not likely to be well-received in the state’s Republican legislature.

This story is part of a partnership that includes Minnesota Public Radio, NPR and Kaiser Health News.