FLINT, Mich. – Inside the Genesee County Health Department, Mark Valacak gestures to a darkened office that until a few months ago housed a clinic providing free baby formula and diapers to poor mothers. “You used to always hear the crying babies,” before the clinic was closed and services moved to a suburban clinic, says Valacak, the county health officer. 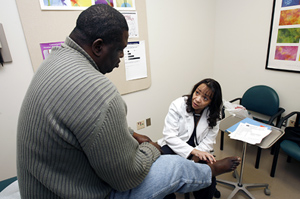 Around a corner is another empty waiting area. It’s Tuesday, one of the two days of the week the STD clinic is closed because of budget cuts, and Valacak frets that the service cutback could lead to an increase in syphilis and other sexually transmitted diseases.

In cities and counties across the nation, the housing bust has hit health care. In Genesee County, where housing prices have plunged and foreclosures have been widespread, property tax revenues have declined by 15 percent over the last two years.

The decrease is hampering efforts by the county, which is 75 miles northwest of Detroit and the birthplace of General Motors Corp., to provide health care to the poor as well as public health services.

Late last year, the county laid off 30 people in the health department and cut its paramedics workforce by 15 percent. Meanwhile, the Genesee Health Plan, a county-backed plan for low-income residents, which is partly funded by property taxes, has stopped covering MRIs and may soon have to start turning away new applicants.

The health cuts underscore the woes of municipalities across the country, which are struggling amid glimmers of an economic recovery. Nationally, property tax revenues, which are the biggest source of revenue for many cities and counties, last year fell an inflation-adjusted 1.8 percent, the first decline in at least two decades, according to the National League of Cities. These revenues tend to lag changes in sales and income taxes partly because assessments usually take place only every few years.

Things are likely to get worse for local governments. Property-tax revenues are expected to decline again this year, the league says. In addition, federal stimulus money ends this summer and states are cutting funds to cities and counties – even as demand for services such as health care continues to increase. 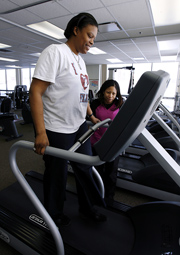 “Local governments are at the bottom of the hill and bad news rolls downhill,” said Robert Ward, deputy director of the Rockefeller Institute of Government in Albany, N.Y. “There is nowhere else for local governments to go, other than to reduce their workforce and raise local taxes.”

In the District, where property tax revenues declined last year, 125 jobs in the health department jobs were eliminated. Spokeswoman Dena Iverson said the city did not cut any services because it transferred responsibilities to other employees.

In late 2009, the Prince George’s County Health Department cut the jobs of six staffers and eliminated its adult health education and nursing home licensing program. The cuts were the result of falling property and income tax revenue.

Partly because of a slowdown in property-tax growth, the Montgomery County Health Department last year eliminated 11 jobs, including those of five public health nurses. Services to prevent childhood obesity and reduce substance abuse were among those cut, said county spokeswoman Mary Anderson, who added that property tax revenues are expected to decline this year.

Around the country, health cuts are occurring because of a variety of financial pressures:

The Genesee Health Plan, which has a $25 million budget, was started in 2001 to help people who made too much to qualify for Medicaid, the state-federal program for the poor, but not enough to buy private insurance. Five years later, county voters approved higher property taxes – about $50 a year for the average homeowner – in order to expand the plan. Since that vote, enrollment has tripled, and now numbers 28,000 people.

The program covers doctor visits, generic drugs and mental health services, but not hospital care. Local hospitals get lump-sum payments from the plan to partly cover their costs of treating enrollees.

Jennifer Stephenson, who has had two recent heart attacks, says, “I’d be dead” without the plan, which pays for her medications and visits to the doctor. Rod Adcox, a 40-year-old mechanic who works at a scrap yard and has just been diagnosed with a hernia, says he’s happy he got into the Genesee plan. “I know I needed insurance but I can’t afford $600 a month,” he says.

But because of the drop in property tax revenues, the health plan is now being squeezed. New applicants have to wait for two months before they are allowed to enroll, and Linda Hamacher, the health plan’s CEO, worries that she might have to close enrollment entirely – something that she says “would be disastrous” in a county with a double-digit unemployment rate. If people are turned away, Hamacher says, they’ll end up putting off seeking care or wind up in expensive hospital emergency rooms for primary care.

On a frigid day last month, more than 30 people showed up at the plan’s office to enroll or get help finding health care. One woman with multiple sclerosis needed a checkup, while a woman with a thyroid problem needed prescription drugs. A man needed a mental health evaluation.

In 2014, under the new federal health law, many of the health plan’s members will qualify for Medicaid, easing pressure on the plan. But Hamacher says she’s worried about the near term: keeping her plan open to new members now and getting county voters to renew the plan’s property tax financing next year. Neither is a sure bet.