LOS ANGELES -Latino lawmakers and health leaders in California are sounding alarms about the insurance marketplace’s preparation and tactics for enrolling Spanish speakers and are urging changes following the recent announcement that fewer than 1,000 signed up in the health law’s first month.

“This is completely unacceptable,” said state Sen. Norma Torres, a Democrat who represents parts of San Bernardino and eastern Los Angeles counties. “Obviously their plan for reaching this demographic is not working. They should reevaluate and come up with a new strategy.”

The success of the California health exchange, known as Covered California, depends on robust enrollment of Latinos, who make up about 60 percent of the state’s uninsured population and are generally younger and healthier than other potential enrollees. The marketplace and nonprofit groups have poured millions of dollars into advertising and outreach aimed at Latinos. 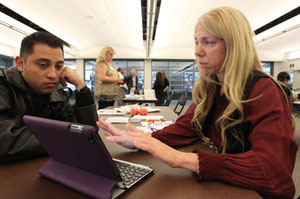 Yet Spanish-speaking consumers made up just 3 percent of the 31,000 enrollees in October. Many more people were enrolling in November, according to Covered California, which has been largely free of the glitches plaguing its federally-run counterparts in other states. But a breakdown of that data by ethnic group isn’t expected until the middle of December.

California’s experience could bode ill for other heavily Latino states, where the barriers to Spanish-language consumers are even greater. On the federal website, consumers won’t even be able to enroll in their native language until at least early December. Enrollment continues until March 31, but the deadline for coverage that begins Jan. 1 is Dec. 23, three weeks away.

Advocates said several problems have contributed to California’s lagging Latino enrollment: There is no paper application in Spanish for a population that often doesn’t have access to computers or isn’t comfortable using them. Not enough bilingual phone operators were hired to guide consumers through the online process. And there is still a shortage of on-the-ground enrollment counselors, who can explain the process in person in clinics and other community settings.

Covered California requires those who want to become certified enrollment counselors to complete a training course and undergo a criminal background check that includes submitting fingerprints. Exchange officials said they underestimated how long those checks would take.

State Sen. Ed Hernandez, a Los Angeles-area Democrat and chairman of the Senate Committee on Health, said he is concerned about the low number of Spanish-speaking enrollees but remains optimistic that will improve. Covered California needs to make a Spanish-language paper application available as soon as possible and boost enrollments at community clinics and nonprofits, he said.

“It needs to be ramped up very quickly,” he said. “If it isn’t addressed, it is going to be a huge issue.”

In addition, a call center with numerous bilingual operators recently opened in Fresno and a paper application in Spanish is scheduled to be available in mid-December.

“These are not ideal numbers but we know the numbers will change,” said Covered California spokesman Santiago Lucero.

Consumers can apply online through a Spanish-language version of the California website. But the site has had numerous problems, including asking security questions in English and misspelling Spanish words such as “si”, said Daniel Zingale, a senior vice president at The California Endowment, a philanthropy that has invested heavily in Latino enrollment.

Covered California is responding quickly to problems but should have been ready on Oct. 1 to serve consumers whose first language is Spanish, he said. “You don’t need a plan and then a Plan B for Latinos. You need a Plan A for Latinos.”

There have also been issues with the telephone system, which has guided Spanish-speakers to English-language prompts, according to advocates and enrollers. And the average wait time to receive help is still about 18 minutes.

Ampelia Lopez, 50, said she desperately wants insurance coverage so she can stop going to the emergency room every time she needs to see a doctor for her asthma. Lopez said she doesn’t have a computer so she tried to call Covered California. She waited for more than a half hour before giving up.

Lopez said she doesn’t know where to go to sign up, but she plans to ask a friend who works at a hospital in Los Angeles. She knows that if she doesn’t get covered she will have to pay a fine. For now, she said, “I am just waiting.”

Spanish speakers often prefer the phone to a computer – and the system wasn’t set up to accept all of those calls, said Hector Flores, chairman of the Latino advisory committee for the Los Angeles County Medical Association. “If there is a long line, that creates a barrier,” he said.

In California, an estimated 1.7 million Latinos are eligible for Medi-Cal and 1.2 million are expected to be eligible for subsidies when they purchase insurance plans through the exchange.

Zingale said he believes the demand for health coverage is there but first Covered California needs to clear up the glitches in the website and telephone system. “Obamacare will not succeed without paying attention to these issues that are impeding enrollment among Latinos,” he said.

Flores said most of his patients have seen the commercials and the ads in Spanish. But they still have lots of questions and need to go to someone they trust for help. Many of the enrollment counselors at those places – clinics, nonprofits and hospitals – are still waiting for final certification from Covered California.

Jose Rodriguez, an insurance agent in South Pasadena, was able to get his certification and has helped some Spanish speakers sign up for coverage. He guides them through an application in English and says the fact that there is no Spanish-language application is “garbage.” Because the website is not very user-friendly, he often prints out applications and mails them in, he said.

Rodriguez also has noticed cultural barriers: Some of his clients are hesitant to turn over personal and financial information to the government. Others prefer to rely on home remedies rather than pay for insurance.

Throughout the state, some of those eligible are worried about calling attention to family members who are here illegally and don’t qualify for coverage. The potential applicants either don’t know about or trust promises from immigration authorities that they will not use information from the health exchanges for deportations or other sanctions.

Aware of some of these challenges months ago, Covered California began running ads in Spanish and awarded outreach grants to organizations that work in heavily Latino communities. Officials also partnered with The California Endowment and Spanish-language media to educate Latino consumers, many of whom had never had insurance before.

But the recent numbers show more resources are needed to demystify the Affordable Care Act, health leaders and lawmakers said. And that must involve community health workers and outreach in neighborhoods. Raquel Donoso, chief executive of the Latino Community Foundation, which funds programs for Latinos in the Bay Area and Central Valley, said there isn’t much time left.

Without adequately staffed call centers and a paper application in Spanish, Donoso said it’s not surprising that enrollment has been low. “It’s definitely a problem,” she said. “The state needs to take another look at what’s the next step of the strategy.”

Torres, the state senator, said the marketplace’s ability to establish affordable insurance rates in the future could be in jeopardy if more Latinos don’t sign up. “You can’t just buy up a bunch of Spanish language advertisements and expect success,” she said.