It took Carrie Wanamaker several days to connect the face she saw on GoFundMe with the young woman she had met a few years before.

According to the fundraising site, Adeline Fagan, a 28-year-old resident OB-GYN, had developed a debilitating case of COVID-19 and was on a ventilator in Houston.

Scrolling through her phone, Wanamaker found the picture she took of Fagan in 2018, showing the fourth-year medical student at her side in the delivery room, beaming at Wanamaker’s pink, crying, minutes-old daughter. Fagan supported Wanamaker’s leg through the birth because the epidural paralyzed her below the waist, and they joked and laughed since Wanamaker felt loopy from the anesthesia.

“I didn’t expect my delivery to go that way,” said Wanamaker, a pediatric dentist in upstate New York. “You always hear about it being the woman screaming and cursing at her husband, but it wasn’t like that at all. We just had a really great time. She made it a really special experience for me.”

The physician tested positive for the coronavirus in early July and died Sept. 19, after spending over two months in hospital. She had worked in a Houston emergency department, and a family member says she reused personal protective equipment day after day due to shortages.

Fagan is one of over 250 medical staff who died in Southern and Western hot spot states as the virus surged there over the summer, according to reporting by the Guardian and KHN as part of Lost on the Frontline, a project to track every U.S. health care worker death. In Texas, nine medical deaths in April soared to 33 in July, after Gov. Greg Abbott hastily pushed to reopen the state for business and then reversed course.

Among the deceased health workers who have so far been profiled by the Lost on the Frontline team, about a dozen nationwide, including Fagan, were under 30. The median age of death from COVID for medical staff is 57, compared with 78 in the general population. Around one-third of the deaths involved concerns over inadequate PPE. Protective equipment shortages are devastating for health care workers, who are at least three times more likely to become infected with the COVID virus than the general population.

“It kicked me in the gut,” said Wanamaker. “This is not what was supposed to happen. She was supposed to go out there and live her dreams and finally be able to enjoy her life after all these years of studying.”

Fagan worked at a hospital called HCA Houston Healthcare West, and had moved to Texas in 2019 after completing medical school in Buffalo, New York, a few hours from her hometown of LaFayette.

She was the second of four sisters, all pursuing or considering careers in the medical field. A younger sibling, Maureen, 23, said Fagan dealt with patients in uncomfortable or embarrassing situations with “grace,” as she had observed when she accompanied her on two medical mission trips to Haiti. “Addie was very much, ‘Do you understand? Do you have other questions? I will go over this with you a million times if need be.’”

Maureen also mentioned Fagan’s comical side — she was voted by her colleagues as the ‘most likely to be found skipping and singing down the hall to a delivery’ and prone to rolling out hammy Scottish and English accents. 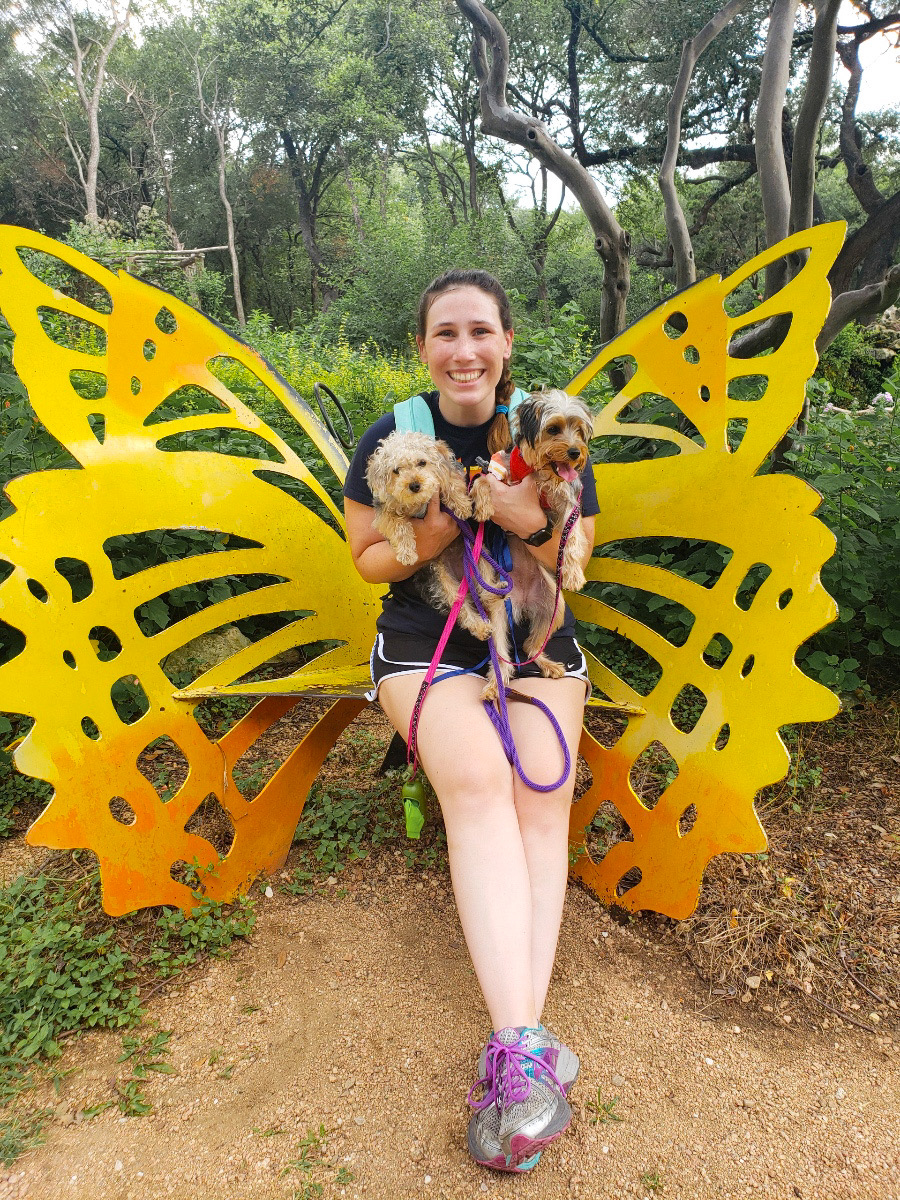 Adeline Fagan with dogs belonging to her sister Maureen.(Maureen Fagan)

Fagan “loved delivering babies, loved being part of the happy moment when a baby comes into the world, loved working with mothers,” said Dr. Dori Marshall, associate dean at the University at Buffalo medical school. But she found living by herself in Houston lonely, and in February Maureen moved down to keep her company; she could just as easily prepare for her own medical school entrance exam in Texas.

It is unclear how Fagan contracted the coronavirus, but to Maureen it seemed linked to her July rotation in the ER. HCA West is part of HCA Healthcare — the country’s largest hospital chain — and in recent months a national nurses union has complained of its “willful violation” of workplace safety protocols, including pushing infected staff to continue clocking in.

Amid national shortages, Maureen said her sister faced a particular challenge with PPE. “Adeline had an N95 mask and had her name written on it,” she said. “Adeline wore the same N95 for weeks and weeks, if not months and months.”

The CDC recommends that an N95 mask should be reused at most five times, unless a manufacturer advises otherwise. HCA West said it would not comment specifically on Maureen’s allegations, but the facility’s chief medical officer, Dr. Emily Sedgwick, said the hospital’s policies did not involve individuals constantly reusing the same mask.

“Our protocol, based on CDC guidance, includes colleagues turning in their N95 masks at the conclusion of each shift, and receiving another mask at the beginning of their next shift.” A spokesperson for HCA West, Selena Mejia, also said that hospital staff were “heartbroken” by Fagan’s death.

On July 8, Fagan arrived home with body aches, a headache and a fever, and a COVID test came back positive. For a week the sisters quarantined, and Fagan, who had asthma, used her nebulizer. But her breathing difficulties persisted, and one afternoon Maureen noticed that her sister’s lips were blue, and insisted they go to the hospital.

For two weeks, the hospital attempted to supplement Fagan’s failing lungs with oxygen. She grew so weak she wasn’t able to hold her phone up or even keep her head upright. She was transferred to another hospital, where she agreed to be put on a ventilator.

Less than a day later, she was hooked up to an ECMO device for a highly invasive treatment of last resort, in which blood is removed from the body via surgically implanted intravenous tubes, artificially oxygenated and then returned.

She lingered in this state through August, an experience documented on a blog by her software engineer father, Brant, who arrived in Houston with her mother, Mary Jane, a retired special education teacher, even though they were not allowed to visit Fagan.

The medical team tried to wean her off the machines and the nine sedatives she was at one point receiving, but as she emerged from unconsciousness she became anxious and was put back under to stop her from pulling out the tubes snaking into her body. She was able to respond to instructions to wiggle her toes. A nurse told Brant she might be suffering from “ICU psychosis,” a delirium caused by a prolonged stay in intensive care.

The family tried to speak with her daily. “The nurse told us that they have seen Adeline’s eyes tear up after we have been talking to her on the phone,” Brant wrote. “So it must be having some impact.”

On Sept. 15, her parents were at last permitted to visit. “I do not think we were prepared for what we saw, in person, when we entered her room,” he wrote. “Occasionally, Adeline would try to respond, shake her head or mouth a word or two. But her stare was glassy and you were not sure if she was in there.”

It was too much for him. “Being the softy that cannot stand it when one of my girls is hurting, [I] commenced to get lightheaded and pass out.”

Finally, on Sept. 17, it seemed Fagan was turning a corner. Still partly sedated, she was nevertheless able to sit up without support. She mouthed the words to a song, being unable to sing because a tracheostomy prevented air from passing over her vocal cords.

The next day, the ECMO tubes were removed. The day after that, Brant made his last post.

His daughter had suffered a massive brain hemorrhage, possibly because her vascular system had been weakened by the virus. Patients on ECMO also take high doses of blood thinners to prevent clots.

A neurosurgeon said that even on the remote chance Fagan survived surgery, she would be profoundly brain-damaged.

“We spent the remaining minutes hugging, comforting and talking to Adeline,” Brant wrote.

“And then the world stopped.”

Young Doctor Succumbs to COVID, One of the South’s Many Health Workers Lost