By March 5, Andrew Cencini, a computer science professor at Vermont’s Bennington College, had been having bouts of fever, malaise and a bit of difficulty breathing for a couple of weeks. Just before falling ill, he had traveled to New York City, helped with computers at a local prison and gone out on multiple calls as a volunteer firefighter.

So with COVID-19 cases rising across the country, he called his doctor for direction. He was advised to come to the doctor’s group practice, where staff took swabs for flu and other viruses as he sat in his truck. The results came back negative. 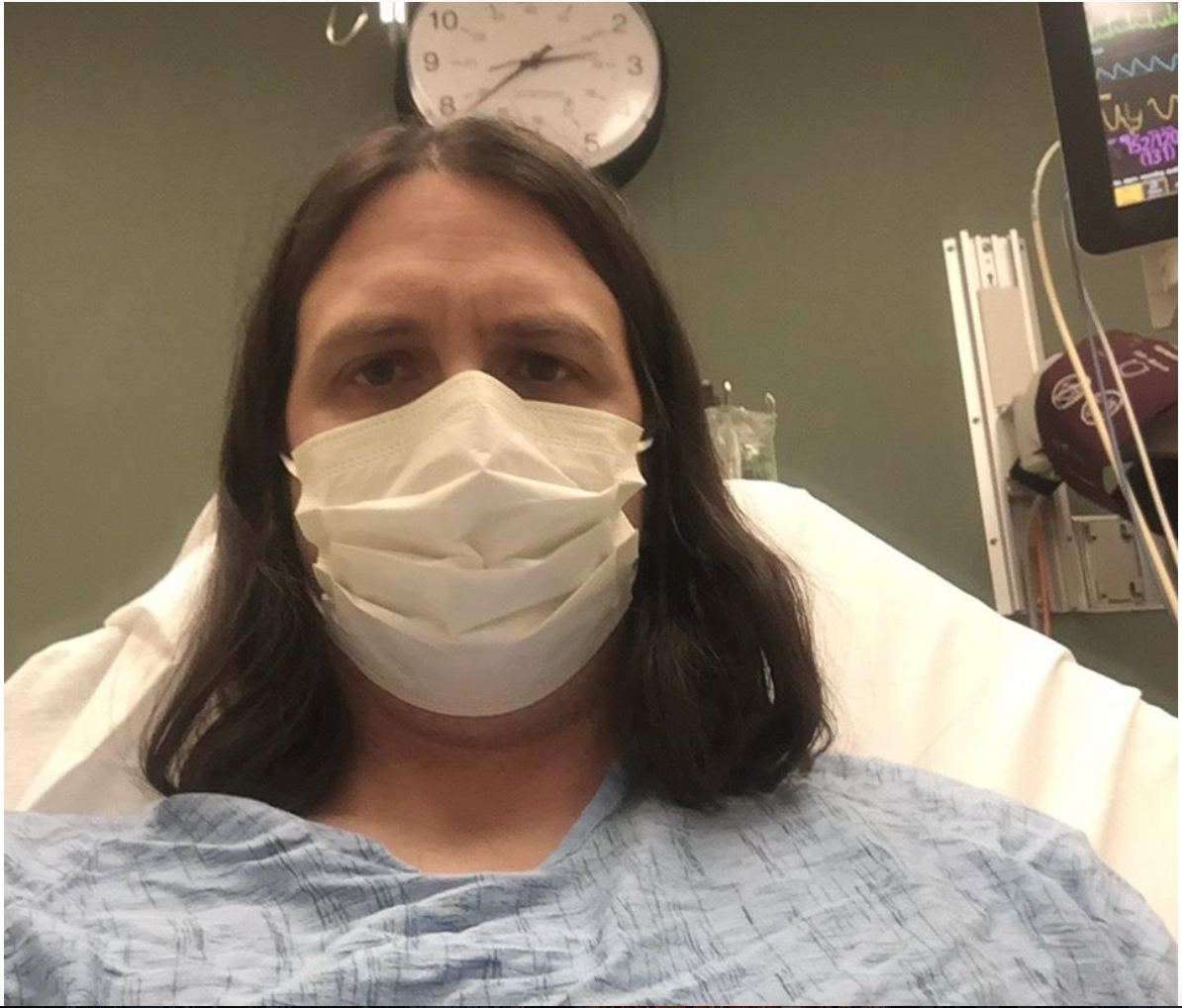 In an isolation room, the doctors put Andrew Cencini on an IV drip, did a chest X-ray and took the swabs.(Courtesy of Andrew Cencini)

By March 9, he reported to his doctor that he was feeling better but still had some cough and a low-grade fever. Within minutes, he got a call from the heads of a hospital emergency room and infectious-disease department where he lives in upstate New York: He should come right away to the ER for newly available coronavirus testing. Though they offered to send an ambulance, he felt fine and drove the hourlong trip.

In an isolation room, the doctors put him on an IV drip, did a chest X-ray and took the swabs.

Now back at work remotely, he faces a mounting array of bills. His patient responsibility, according to his insurer, is close to $2,000, and he fears there may be more bills to come.

“I was under the assumption that all that would be covered,” said Cencini, who makes $54,000 a year. “I could have chosen not to do all this, and put countless others at risk. But I was trying to do the right thing.”

But no one is doing much to similarly rescue patients from the related financial stress. And they desperately need protection from the kind of bills patients like Cencini are likely to incur in a system that freely charges for every bit of care it dispenses.

On March 18, President Donald Trump signed a law intended to ensure that Americans could be tested for the coronavirus free, whether they have insurance or not. (He had also announced that health insurers have agreed to waive patient copayments for treatment of COVID-19, the disease caused by the virus.) But their published policies vary widely and leave countless ways for patients to get stuck.

Although insurers had indeed agreed to cover the full cost of diagnostic coronavirus tests, that may well prove illusory: Cencini’s test was free, but his visit to the ER to get it was not.

As might be expected in a country where the price of a knee X-ray can vary by a factor of well over 10, labs so far are charging between about $51 (the Medicare reimbursement rate) and more than $100 for the test. How much will insurers cover?

Those testing laboratories want to be paid — and now. Last week, the American Clinical Laboratory Association, an industry group, complained that they were being overlooked in the coronavirus package.

“Collectively, these labs have completed over 234,000 tests to date, and nearly quadrupled our daily test capacity over the past week,” Julie Khani, president of the ACLA, said in a statement. “They are still waiting for reimbursement for tests performed. In many cases, labs are receiving specimens with incomplete or no insurance information, and are burdened with absorbing the cost.”

There are few provisions in the relief packages to ensure that patients will be protected from large medical bills related to testing, evaluation or treatment — especially since so much of it is taking place in a financial high-risk setting for patients: the emergency room.

In a study last year, about 1 in 6 visits to an emergency room or stays in a hospital had at least one out-of-network charge, increasing the risk of patients’ receiving surprise medical bills, many demanding payment from patients.

That is in large part because many in-network emergency rooms are staffed by doctors who work for private companies, which are not in the same networks. In a Texas study, more than 30% of ER physician services were out-of-network — and most of those services were delivered at in-network hospitals.

The doctor who saw Cencini works with Emergency Care Services of New York, which provides physicians on contract to hospitals and works with some but not all insurers. It is affiliated with TeamHealth, a medical staffing business owned by the private equity firm Blackstone that has come under fire for generating surprise bills.

Some senators had wanted to put a provision in legislation passed in response to the coronavirus to protect patients from surprise out-of-network billing — either a broad clause or one specifically related to coronavirus care. Lobbyists for hospitals, physician staffing firms and air ambulances apparently helped ensure it stayed out of the final version. They played what a person familiar with the negotiations, who spoke on the condition of anonymity, called “the COVID card”: “How could you possibly ask us to deal with surprise billing when we’re trying to battle this pandemic?”

Even without an ER visit, there are perilous billing risks. Not all hospitals and labs are capable of performing the test. And what if my in-network doctor sends my coronavirus test to an out-of-network lab? Before the pandemic, the Kaiser Health News-NPR “Bill of the Month” project produced a feature about Alexa Kasdan, a New Yorker with a head cold, whose throat swab was sent to an out-of-network lab that billed more than $28,000 for testing.

Even patients who do not contract the coronavirus are at a higher risk of incurring a surprise medical bill during the current crisis, when an unrelated health emergency could land you in an unfamiliar, out-of-network hospital because your hospital is too full of COVID-19 patients.

The coronavirus bills passed so far — and those on the table — offer inadequate protection from a system primed to bill patients for all kinds of costs. The Families First Coronavirus Response Act, passed last month, says the test and its related charges will be covered with no patient charge only to the extent that they are related to administering the test or evaluating whether a patient needs it.

That leaves hospital billers and coders wide berth. Cencini went to the ER to get a test, as he was instructed to do. When he called to protest his $1,622.52 bill for hospital charges (his insurer’s discounted rate from over $2,500 in the hospital’s billed charges), a patient representative confirmed that the ER visit and other services performed would be “eligible for cost-sharing” (in his case, all of it, since he had not met his deductible).

This weekend he was notified that the physician charge from Emergency Care Services of New York was $1,166. Though “covered” by his insurance, he owes another $321 for that, bringing his out-of-pocket costs to nearly $2,000.

By the way, his test came back negative.

When he got off the phone with his insurer, his blood was “at the boiling point,” he told us. “My retirement account is tanking and I’m expected to pay for this?”

The coronavirus aid package provides a stimulus payment of $1,200 per person for most adults. Thanks to the billing proclivities of the American health care system, that will not fully offset Cencini’s medical bills.

Analysis: He Got Tested For Coronavirus. Then Came The Flood Of Medical Bills.