For 15 years, Congress has bestowed special privileges to some small remote hospitals, usually in rural areas, to help them stay afloat. Medicare pays them more than it pays most hospitals and exempts them from financial pressure to operate efficiently and requirements to reveal how their patients fare. Nearly one in four hospitals qualifies for the program. 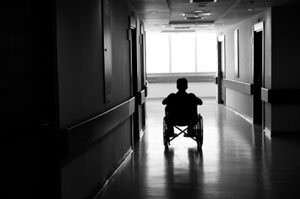 Despite these benefits, there’s new evidence that the quality of many of these hospitals may be deteriorating. A study published Tuesday found that during the past decade the death rates of patients at these critical access hospitals were growing while mortality rates at other hospitals were dropping.

“This carved-out group of hospitals seems to be falling further and further behind,” said the paper’s lead author, Dr. Karen Joynt of the Harvard School of Public Health.

The study, published in the Journal of the American Medical Association, found that in 2002, mortality rates at critical access hospitals for Medicare patients with heart attacks, heart failure and pneumonia were about the same as at other hospitals. But they have diverged since then.

While death rates at other hospitals dropped by 0.2 percent a year, reaching 11.4 percent in 2010, mortality rates at critical access hospital death rates rose about 0.1 percent each year, reaching 13.3 percent in 2010. Critical access hospitals also did worse than other small, rural hospitals that were not in the program. The paper said all these results were statistically significant.

Joynt and her co-authors, John Orav and Dr. Ashish Jha, also of Harvard, suggested that the hospitals’ care may suffer because they don’t have the latest sophisticated technology or specialists to treat the increasingly elderly and frail rural populations. A previous paper by the trio found that critical access hospitals were less likely to have the ability to perform cardiac catheterizations and to have intensive care units.

“As we have more advanced treatments, it’s harder for rural hospital to keep up,” Joynt said. “It’s hard to provide care for really, really sick patients in a resource-limited setting.”

She also suggested that the hospitals may have been victims of their lenient treatment by the government. Since hospital officials are not required to evaluate their performances to make reports to Medicare, the government may not realize that facilities could need additional assistance in caring for sicker patients.

“This is 1,000 hospitals, a quarter of the hospitals in the country, that are invisible,” she said. “We’ve created a completely separate system, and in this case it looks like that has not done patients in these hospitals any favors.”

Brock Slabach, an executive at the National Rural Health Association, cautioned against drawing sweeping conclusions from the report. “Mortality is just one small part of the picture of what qualities means,” he said. He said the association’s own research has found that rural hospitals do better in patient satisfaction surveys than do urban hospitals, and that there’s no substantial difference in other measures such as readmissions.

Congress started the critical access program in 1997 to stave off hospital closures in places where patients had no good alterative because the next hospital was at least 35 miles away by regular roads or 15 miles by secondary roads. Hospitals with 25 or fewer beds could qualify. Hospitals near competitors, in cities as well as rustic areas, also got into the program through a loophole that until 2006 allowed states to designate hospitals as “necessary providers.”

In 2011, 1,331 hospitals qualified for the program, which reimburses hospitals for all of the costs of caring for Medicare patients plus an extra 1 percent.

It’s a generous system compared to the way Medicare pays other hospitals. They are given set sums for each patient based on their illnesses, a method that does not always cover all the costs of treatment.

Medicare spends about $8 billion a year on critical access hospitals, amounting to 5 percent of the country’s inpatient and outpatient expenses, according to Congress’ Medicare Payment Advisory Commission.

Tuesday’s study adds to previous research by the Harvard researchers. In 2011, the researchers found that critical access hospitals were less likely to have basic electronic health records. They also first reported then that these hospitals had worse death rates. After that paper was published, Joynt said rural hospital officials complained that the researchers did not note the improvements the hospitals had made over time.

In the study released Tuesday, Joynt and her colleagues examined that objection, but they determined that although some critical access hospitals had improved, overall the group had done worse compared with others. Tuesday’s study is the result of that research.

An accompanying editorial by Dr. John Ioannidis, a medical professor at Stanford, called the paper “the best study to date” on the issue, though he said the paper might not have captured all the potential reasons for the discrepancy in death rates. He also questioned whether policymakers should enact broad changes on critical access hospitals.

“Trying to impose quality data collection and reporting in such hospitals that have already strained resources may actually do more harm than good,” Ioannidis wrote. “Even for non-CAHs, the evidence is tenuous that performance and quality initiatives do work.”

Joynt said that her research, while not conclusive, indicated that the hospitals might need additional help. For instance, she said, through telemedicine, larger hospitals could offer the advice of their specialists to rural hospitals confronting complex cases. In addition, there might be better ways to transfer those patients to more advanced hospitals, she said.

“I see this as more of a systems problem than just a hospital problem,” Joynt said. “I don’t think that there really exists the right sort of systems or incentives to make that happen.”