Five Rivers Medical Center in Pocahontas, Ark., needs help to get a highly coveted “critical access” hospital designation – and the extra Medicare funding that comes with it.

Sen. Mark Pryor, an Arkansas Democrat, intends to provide it.

Pryor is among several senators – including Ron Wyden, D-Ore., Sam Brownback, R-Kan., and Budget Committee Chairman Kent Conrad, D-N.D. – who want to help rural hospitals in their states get the funding boost that comes with the “critical access” designation. The catch: The same senators are among those pushing hardest to hold the line on the cost of health care reform. 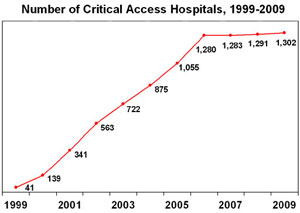 “When there are local interests, cost constraints go out the window,” said Robert Bixby, executive director of the Concord Coalition, a budget watchdog group. “When you see those things, it does make you wonder about the ability to follow through on some of the very aggressive provider restraints they assume in these bills.”

Asked whether Pryor saw any inconsistency, his spokeswoman said the senator is committed to “ensuring people living in rural America are able to get to an emergency room in a reasonable amount of time when they need to.” Access to care is a critical issue in isolated areas, other lawmakers and rural health care advocates say, and hospitals need extra funding and flexibility.

Congress created the “critical access hospital” category in 1997 to ensure access to care in isolated parts of the country. Under the law, hospitals that are at least 35 miles away from other health facilities can be deemed “critical access” hospitals; those hospitals can collect 101 percent of their costs from Medicare, for a maximum of 25 beds, rather than the usual 95 percent of allowable costs.

Growth in such hospitals exploded, and by 2006, there were 1,280 critical access facilities. And many of them won the designation despite being located within 35 miles of other medical facilities; state officials routinely waived the requirement with federal acquiescence.

The rapid growth slowed three years ago when Congress, worried about billions of dollars in added Medicare costs, eliminated states’ rights to waive the 35-mile rule. Since then, only a couple of dozen new critical access hospitals have been designated. The total is currently about 1,300.

Now lawmakers from rural states want to ease the rules, partly by making it easier for hospitals to qualify for “critical access” status even if they are less than 35 miles from another facility. Supporters note that the hospitals, besides providing emergency and limited inpatient treatment, are often the mainstays of small-town economies. “Hospital reimbursement systems that work well in larger cities do not necessarily work in rural towns, where people still need health care,” Pryor’s spokeswoman said, “but the same volume of patients is not present.”

The administrator and CEO of Five Rivers Medical Center, John Tucker, said getting the critical access designation would turn a projected $300,000 loss this year to a $400,000 surplus, allowing him to improve equipment and technology. “It would help us maybe thrive where we ordinarily just survive, like it has done with so many rural hospitals across the country,” Tucker explained.

Conrad acknowledged in a recent interview that rural lawmakers may push for changes to expand the critical access program when health care overhaul legislation reaches the Senate floor. “That’s certainly an item for discussion before we’re finished,” Conrad said. “Most of my hospitals are critical access hospitals … [They] are important to so many members.”

Pryor and Brownback want to restore states’ rights to waive the 35-mile distance requirement and declare that additional critical access hospitals are necessary for public health and safety. For his part, Wyden has indicated he would press to give critical access hospitals the flexibility to expand beyond the required limit of 25 beds to meet the needs of their communities.

During the Finance Committee’s consideration of health care legislation, Wyden filed but did not offer his amendment, which would have cost $1.7 billion over the next decade; he couldn’t point to a spending cut or revenue increase to offset the cost. His spokeswoman, Jennifer Hoelzer, said that Wyden’s focus on a complete overhaul of the system would result in cost savings that could be used for critical access hospitals.

The finances of Hillsboro Medical Center in North Dakota improved markedly after it got a “critical access” designation — and higher Medicare payments. Sens. Kent Conrad, D-N.D., Ron Wyden, D-Ore., David Pryor, D-Ark., and Sam Brownback, R-Kans., want to make it easier for other rural hospitals to get the designations, as part of a health overhaul.

“When he talks about the need to bend the cost curve down, he’s [saying] we’re spending enough money in health care right now, we’re just not spending it efficiently,” Hoelzer said. “If you can actually inject choice and competition you’re going to come up with savings that can go to things like critical access hospitals.”

Executives of the hospitals and supportive lawmakers say the extra money is a drop in the bucket. In 2007, Medicare payments to these hospitals totaled $7 billion, or 5 percent of all Medicare inpatient and outpatient payments to hospitals, according to the Medicare Payment Advisory Commission, which advises Congress on Medicare issues.

Critical access hospitals now account for more than half of all rural hospitals and a fifth of all hospitals across the country.

Some experts say that the waiver process led to a subversion of the intent of the 1997 legislation, which was to create a small number of critical access hospitals in isolated areas to stabilize patients and then transfer them to larger hospitals. “Over time, it’s become clear that the concept has changed, so it looks like almost any rural hospital is being considered as a critical access hospital, with no longer the expectation the patient will be transferred,” said Robert Berenson, a former Medicare official who is now at the Urban Institute.

Maggie Elehwany of the National Rural Health Association said that changing the bed limit regulation, as Wyden wants to do, would enable rural hospitals to respond better to crises such as an outbreak of swine flu. The hospitals, rather than being limited to 25 beds, would have the flexibility to expand or contract the number of beds, as long as the annual average was 20.

The 13 Democrats and 10 Republicans on the Finance Committee represent states with a total of 619 critical access hospitals, nearly half of all such facilities. Montana, the home state of Sen. Max Baucus, the chairman of the committee, has 47. North Dakota, which Conrad represents, has 36, among them tiny Union Hospital in Mayville, N.D.

In 2000, the hospital was on course to lose $500,000 and either drastically cut back its services or shut down, according to Roger Baier, the chief executive officer. In desperation, officials decided to seek the critical access designation to boost its Medicare payments by as much as 7 percent. “We decided this would be the best approach to keep our doors open,” Baier said.

Union won the designation even though it was only 19 miles from another hospital in neighboring Hillsboro. State officials waived the 35-mile requirement, concluding that the hospitals had different patient service areas and that some of the roads connecting the two facilities were in bad condition. Now the 25-bed hospital has $800,000 in reserves.

Lawmakers to Fight for Rural Hospitals Despite Budget Concerns On Reform