Virginia’s Republican Attorney General Ken Cuccinelli has defined himself as one of the country’s leading conservatives with his lawsuit against the health care overhaul law. Filed within minutes after the law passed in March 2010, the suit could set limits on Congress’ power. 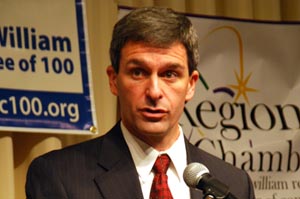 At issue is the law’s requirement that people, if they don’t have health insurance, must purchase it beginning in 2014 or face a financial penalty. Virginia’s suit argues that requiring citizens to purchase a product is a violation of the Commerce Clause in the Constitution.

A federal district court judge has agreed with Cuccinelli and the case – along with cases filed by other states – is expected by legal scholars to be heard by the Supreme Court next year.

In an interview with KHN’s Bara Vaida, Cuccinelli said he thinks he has a 60 percent chance of prevailing in the dispute. He also acknowledged that the health care system isn’t perfect and that it is “painful for us knowing some care exists somewhere that I can’t get because I don’t have enough money.” But he believes that if the Virginia suit is successful, it will preserve the free market in health care, which ultimately will be better for society. Here is the edited transcript of that conversation:

Q. Many legal scholars believe that the Supreme Court will uphold the constitutionality of the health law because the court has taken a broad view of Congress’ power. Why do you think you’ll prevail in this case?

There are a couple of basic legal reasons. One is that the federal government is reaching in terms of extending its power further than it ever has before. The government has never before ordered Americans to buy a product under the guise of the Commerce Clause. The second is that the nature of this overreach would gut federalism. If all the federal government needs to do is to declare it is acting to regulate commerce, it can order you to buy any product. Then the separate and unique authority carved out by the founders of the country for the states is pretty much eviscerated.

Q. So what do you think are your chances of winning?

I am cautiously optimistic. I’d say, above 50 percent, no higher than 60 percent, because the nature of constitutional cases is very unpredictable. A lot of people presume the government will win, because it usually does, but there have been four major Commerce Clause cases and the court ruled in favor of the limited-government side in two of the four, so it isn’t as if we always lose and that is within the past 16 years.

Q. If the court strikes down the law could that put the legality of Medicare and Social Security in jeopardy? The law’s supporters say the individual mandate is similar to the requirement that people contribute to these programs.

Q. The Declaration of Independence says we have the right to “life, liberty and the pursuit of happiness,” so isn’t health care equivalent to life? Isn’t there a right to health care?

That is a socialist question. You are suggesting the government is to provide all of that and that has absolutely never been the case as a matter of right. You have the right for the opportunity to have those things.

If this law stays in place, there will be rationing. Right now the market decides, and right now people are uncomfortable with that. But under the law, bureaucrats will decide.

If we can tolerate as a society people with more money getting more health care, what they end up doing is buying the newest and best and highest-end health care they can get when it is most expensive, and that is when it is in its infancy. And those folks over time help bring costs down for everyone else and bring it in reach of other people. That is the benefit of letting the market play out. It’s painful being around and knowing some care exists somewhere that I can’t get because I don’t have enough money. The solace for me is that people doing this over time, using that care and paying that money, will allow us to refine it and make it cheaper and more available to more people.

Q. Why are you

asking that the Supreme Court expedite
this case. Why shouldn’t it go through the traditional appeals process?

Because of the massive costs that are being incurred in my jurisdiction, in Virginia, and then multiply that by 50 states.

Q. How much of the state’s resources is this case taking up?

It’s pretty minimal. This isn’t like other types of cases. We don’t have depositions, we don’t have documents, we don’t have witnesses and discovery. We have spent $350 for the filing fee and $10,000 for the specialized printing for the Supreme Court and that is about it. Everyone else is already working in the office, and there are no marginal costs we can break out.

Q. Do you see this case as a campaign issue for another office?

Some say defending the Constitution is to my credit. I hear from many other people in Virginia, who say to me they don’t care about the Constitution. They say “Oh good, I can get care for my daughter now and you, Ken Cuccinelli, are getting in the way of that.” So in terms of getting votes in the future, that is going to cause me problems. I understand that, and I’m not happy about that. I want to help as many people as I can, and I actually believe that in the aggregate, over the long term, I believe I am doing that.