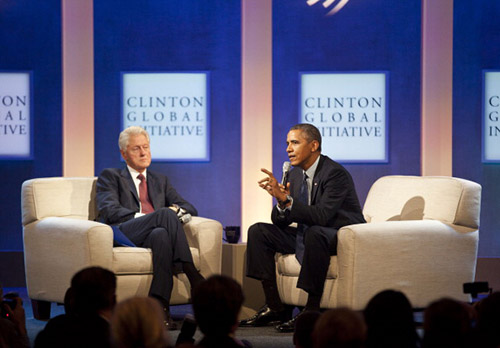 President Obama’s health care law has so far survived challenges in Congress and the courts. But its biggest test could begin next week. That’s when the online marketplaces offering health care coverage to the uninsured are set to start signing people up. The question is, will they come?

Of the uninsured surveyed by NBC and the Wall Street Journal this month, only about one in three said they’re likely to use the exchanges. Obama is trying to make the argument that signing up is a good deal: “In many states across the country, if you’re say a 27-year-old young woman, don’t have health insurance, you get on that exchange, you’re going to be able to purchase high-quality health insurance for less than the cost of your cell phone bill.”

The White House is enlisting nurses, ministers, celebrities, even radio DJs to help spread that message. On Tuesday, Obama got some help from former President Bill Clinton. The two leaders sat side by side in a pair of overstuffed armchairs at the Clinton Global Initiative for a televised — if somewhat wonky — conversation about health care economics.

It’s the nature of insurance, Obama said, for healthy people to subsidize those who need more care. Clinton says that’s why it’s important to get healthy young people enrolled in the insurance exchanges.

“This only works, for example, if young people show up,” said Clinton. “We’ve got to have them in the pools. Because otherwise all these projected low costs cannot be held if older people with pre-existing conditions are disproportionately represented in any given state.”

Clinton understands those economics, having launched his own, unsuccessful push for universal coverage 20 years ago this week. Obama got further, pushing his bill through Congress, but he notes the battle to implement the law is far from over: “Let’s face it, it’s been a little political, this whole Obamacare thing.”

The administration is now using social media and other tactics honed during the president’s re-election campaign to promote enrollment in the health care exchanges. Obama acknowledges they’re battling a multimillion-dollar advertising blitz mounted by the president’s critics.

“Those who have opposed the idea of universal health care in the first place and have fought this thing tooth and nail through Congress and through the courts and so forth, have been trying to scare and discourage people from getting a good deal,” said Obama.

Congressional Republicans also continue to challenge the law, which was passed over their unanimous opposition in 2010. Despite the battle being waged within the Republican ranks right now over tactics like the filibuster and a threatened government shutdown, Senate GOP leader Mitch McConnell says his party is united in its opposition to the health care overhaul.

“Obamacare hasn’t even been fully implemented yet but we can already see the train wreck headed our way,” said McConnell. “Major companies have been dropping the health care plans their employees have and like. And every week it seems there are new reports about glitches that will hurt families, compromise personal information, or expose the American people to fraud.”

The administration has been forced to delay some elements of the law, including a requirement that large employers provide health care coverage or pay a penalty.

On the plus side, Clinton noted Tuesday the growth in health care costs has slowed dramatically in recent years, though analysts are unsure what’s behind the change. Obama says if U.S. health care costs could be brought in line with other countries, it would largely fix the federal deficit and make U.S. employers more competitive.

“This has everything to do with the economy, in addition to what I consider to be the moral imperative that a mom should not have to go bankrupt if her son or daughter gets sick,” said Obama.

Obama plans to deliver another health care speech Thursday, as the countdown to enrollment continues.