But this data stream is not big enough or fast enough for some entrepreneurs. 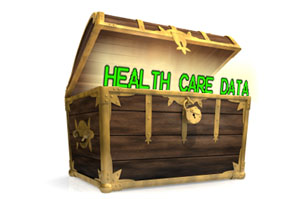 Sebelius, who was speaking at the annual Health Datapalooza conference Monday in Washington, told Bush and hundreds of other tech entrepreneurs that the Obama administration is “a great believer that unlocking our data, turning it over to those of you that know how to formulate that data for policymakers and providers, is the best possible thing to do.”

The White House is trying to spur innovation by releasing more of its data from Medicare, Medicaid and other sources. It’s using the approach taken by the National Oceanic and Atmospheric Administration as a prototype, hoping to trigger a blossoming of new products, services and businesses similar to what happened when that agency threw open the doors to its weather forecasting models and other data.

But Bush said the federal government also could learn from the private sector in how it shares valuable price and quality intelligence with entrepreneurs. Health plans, he added, are a lot more forthcoming with the kind of information care management companies like his need to steer patients to the best value and avoid inefficient operators.

“My hope is the pressure will build and eventually [HHS] will let go,” of more claims data, said Bush, who is a cousin of George W. Bush.

Datapalooza is an effort by “data liberators” in government, academia and private industry to build  pressure for more access to health care information like utilization rates, geographic anomalies and just about anything else the government and private industry knows about patients, payers and providers. The idea is that, in the hands of creative entrepreneurs, “lazy data” can be transformed into innovative new products and services.

The “conditions are aligned unlike they’ve ever been aligned before,” for health care transformation, said Steven Krein, a tech entrepreneur and co-organizer of Datapalooza. Out-of-control health care costs and Affordable Care Act initiatives to drive them down are creating new opportunities for data scientists to reduce waste and inefficiency, making money for themselves from the savings they can deliver to health plans, health care providers and patients.

Hospitals are willing to pay for new computer modeling software that predicts, for instance, which patients are most likely to be re-admitted within 30 days of discharge. Government penalties for high re-admission rates are creating that incentive, and if programmers can create effective models that cost less than hospitals would pay in penalties, hospitals come out ahead. So do patients, who benefit by not having to return hospitals. Health plans win by not having to pay for re-admissions.

“Healthcare is very backward,” said technology Venture Capitalist David Jones of Chrysalis Ventures. The industry is probably two decades behind purely digital companies like Google and big retailers like WalMart in terms of being able to gather and analyze consumer data, and use to adapt to market demand and improve efficiency and competitiveness, he said.

Among them, the two 28-year-olds behind Aidin, a brand-new tech company aiming to make it easy for people to choose the right post-hospital care.

Mike Galbo and Russ Graney, who have no previous experience in healthcare, dove into health data after having bad experiences watching loved ones struggle in less-than-ideal rehabilitation facilities.

“A nurse from the hospital presented us a list of all the providers in the area with their phone numbers and addresses, and said to us, ‘I’m going to be back in an hour, tell me where you want your uncle to go,'” Graney said. He got out his smartphone, but couldn’t find good information to help him shop for the right facility, and ended up picking the one closest to home. Substandard care there, he said, meant his uncle had to be re-admitted to the hospital a short time later.

So Graney and Galbo combined HHS data with information they gathered on their own to create an online shopping tool that made quality ratings and patient reviews easy to find and use. They’re piloting it in four hospital systems this year, and expect that by this fall that it will be used to place about 30,000 patients in post-acute care facilities.