Insurers who are not selling their wares on Washington, D.C.’s exchange have signaled they may sue to block a D.C. council plan to charge them a 1 percent annual tax on all health-related plans sold in the city. The revenue would pay for the continuing operation of online marketplace. 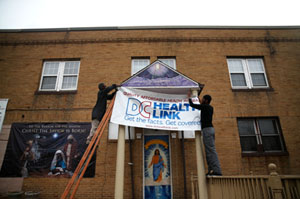 The tax, which gained the council’s unanimous approval May 6, will be effective for 90 days on an emergency basis. The council will vote again in early June on whether to extend the assessment for another 225 days. However, it must undergo congressional review before it can be made permanent.

Under the council’s approach, the “taxable” health plans would include long-term care, disability, vision, dental and hospital indemnity, among others. The DC Health Benefit Exchange Authority will begin notifying the companies about the tax as early as next month.

Beginning Jan 1, 2015, D.C. and state-run marketplaces will no longer receive federal support. In response, some states have allocated general funds to cover operating costs. Others are imposing an insurer tax on each individual plan sold on the exchange.

In D.C., where the exchange will need $28 million in 2015, a tax only on plans that sell in the exchange translates into a 17 percent, per-enrollee assessment. That would likely be passed on to consumers in the form of much higher premiums, undermining the affordability of insurance, according to Mila Kofman, executive director of DC Health Link, the exchange.

But a spokesman from the Unum Group, which sells disability, critical illness, long term care and life insurance policies in D.C., says the concept is not fair.

“The entire industry of health carriers would be subjected to the assessment,” said Chuck Piacentini, a Unum assistant vice president and attorney. But Unum’s coverage — and that of other supplemental insurance companies — is not eligible to be sold on the online marketplace, which only includes major medical insurance plans that meet the health law’s essential benefits standards and other D.C. government requirements.

Unum would not confirm its intent to challenge the tax in court, only that it was weighing all of its options, but Kofman said the companies opposing the tax have threatened such action. In addition, the American Council of Life Insurers said legislative, regulatory and judicial options to stop the bill are on the table.

Kofman also noted that these companies might be worried that other financially-strapped states could adopt a similar funding strategy.

Hawaii, for instance, considered a fee for all health-related insurers, but it was ultimately nixed. Piacentini said they are not aware of other states currently considering a similar tax, but would be concerned if any eventually do go that route.

D.C., where the costs per enrollee are higher than states that have larger populations, has already received $134 million in federal grants for its exchange. So far, D.C. has enrolled about 45,000 people in marketplace and Medicaid plans. “When you build a system, there is a lot of fixed cost, and it doesn’t cost less for a small state versus a large state,” said Leslie Greenwald, chief scientist for health services at consulting firm RTI International.

Fourteen states and the District of Columbia are running state-based exchanges. Most have grappled with how to fund the exchange, though the different funding models are still in the experimental stage, according to Dan Schuyler, senior director of exchange technology at consulting firm Leavitt Partners.

Minnesota has kept the exchange it built and levied a 3.5 percent premium tax on plan insurers, while Nevada charges $4.95 to $13 per member on a monthly basis to insurers and California assesses insurers $13.95 per member per month. Hawaii’s state legislature provided $1.5 million of the $4.7 million requested, leaving the exchange to scramble to find other funding sources.

“Creativity is the key in determining a revenue stream,” Schuyler said.

Note to readers: The original version of this story has been updated and corrected to reflect two points: First, workers’ compensation plans are not considered taxable policies under the measure passed by the D.C. Council. In addition, the DC Health Benefit Exchange Authority will begin notifying insurers next month about the tax but not collecting it, as originally reported.