Patients who use drugs containing hydrocodone as a pain reliever or cough suppressant are going to have to jump through more hoops to get them starting next month. 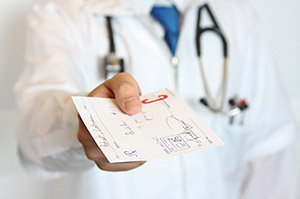 The Drug Enforcement Administration is reclassifying so-called “hydrocodone combination products” from Schedule III to Schedule II under the Controlled Substances Act, which will more tightly restrict access. Vicodin, for example, is an HCP because it has hydrocodone and acetaminophen.

The final regulation, which takes effect Oct. 6, will mean that patients generally must present a written prescription to receive the drug, and doctors will no longer be able to call in a prescription to the pharmacy in most instances. The regulation is a response to the widespread misuse of prescription pain killers.

In an emergency, doctors will still be able to call in a prescription, according to the new rule. And although prescription refills are prohibited, a doctor can, at his discretion, issue multiple prescriptions that would provide up to a 90-day supply.

These measures don’t satisfy consumer advocates or pharmacists who are opposed to the new rule.

While acknowledging that there has been an uptick in abuse and adverse events related to opioid painkillers, one patient advocate says the new rule restricts access indiscriminately.

“We certainly want steps taken to reduce adverse outcomes, but we don’t think this particular rescheduling was the appropriate way to go about doing that,” says Mark Fleury, a policy analyst at the American Cancer Society Cancer Action Network.

Experts say they’re worried that patients may have trouble filling their prescriptions immediately after Oct. 6.

Although pharmacies can sell what they have in stock, their suppliers must re-label HCPs as Schedule II drugs before they can be sold.
“We’ve heard from distributors and manufacturers that they don’t expect to have the appropriately labeled product to fill demand,” Fleury says.

Pharmacists say they’re anticipating confusion around refills of prescriptions written before the regulation takes effect, even though they’re permitted under the new rules.

“We’re hearing that because of discrepancies in state law, payers may not want to authorize refills,” says Stacie Maass, a senior vice president at the American Pharmacists Association.

In the long term, Fleury says, patients who don’t yet know there are new rules about refills will show up at pharmacies and likely be turned away.

“All of these patients are going to find out they don’t have a valid prescription, and have to go in and get a new one,” Fleury says. Adding insult to injury, they may get dinged with an office visit charge for their new prescription.

This story was updated Sept. 26 to clarify that pharmacies can sell their existing stock of HCPs even after new labeling rules take effect Oct. 6.

DEA: Vicodin, Some Other Pain Meds Will Be Harder to Get