With the deadline looming to re-enroll in California’s insurance exchange, Kuei Lin Liu faced a tough question: Do I want to go through this all over again?

After a year of bureaucratic snags, data glitches and inexplicably dropped coverage, Liu wondered whether Covered California was worth the effort.

“I’m so frustrated right now,” she said. “I spent the last year trying to work out this mess.”

The 37-year-old Richmond resident first enrolled in the exchange last fall, when she left a senior accounting position at a big corporation and the benefits that came with it. With two daughters under 5 and a son due in May, Liu said going uninsured was not an option. 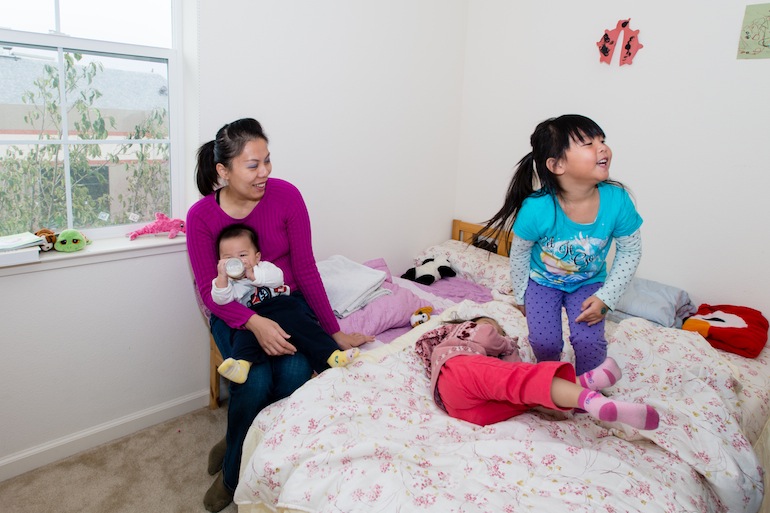 Cecily Liu, 37, with her three children – Nolan Lin, 6 months, Fiona Lin, 3, and Larissa Lin, 5 at their house in Richmond, Calif. The self-employed accountant said signing up her family through Covered California was a hassle (Photo by Heidi de Marco).

So Liu and her husband Qing Lin, a 45-year-old stay-at-home dad, signed up for a benefits-rich platinum plan from Blue Shield of California. With a projected income of about $90,000 from her tax prep business,  they were eligible for a subsidy that covered a third of their nearly $1,600-a-month premium.

The plan wasn’t as generous as the coverage at her accounting job, but having most of the year virtually free to spend with her family was, to her, a fair trade.

Then the hassles began, said Liu, a CPA and native of Taiwan who immigrated to the United States in 1997 to attend college.

After applying in November 2013 for the Blue Shield plan, she didn’t hear back. With no response from the exchange or the insurer by Dec. 28, she panicked. She had her insurance broker submit another application.

The New Year came and went with neither a confirmation nor a bill from Covered California or Blue Shield. She had to pay for an ultrasound out-of-pocket — about $600, said Liu, who goes by Cecily in English. Fearful of giving birth without insurance, she shelled out about $1,200 for an off-exchange policy with Blue Shield that started on Feb. 1.

Shortly afterward, Liu received confirmation that her Covered California plan was in effect. Blue Shield agreed to apply the payment she had already made on the off-exchange plan to the exchange plan — but that took another month. The reason: Blue Shield had separate payment systems for off- and on-exchange plans.

Liu thought her problems were behind her after the company applied the payment correctly. Then, in May, her son Nolan was born.

Knauss contacted Covered California the day after his birth to add him to the family policy. When the enrollment data was submitted to Blue Shield, however, the rest of the family’s coverage disappeared from the computer record. It was reinstated –except for Liu’s older daughter Larissa.

That problem eventually was corrected but the policy started on the wrong date. 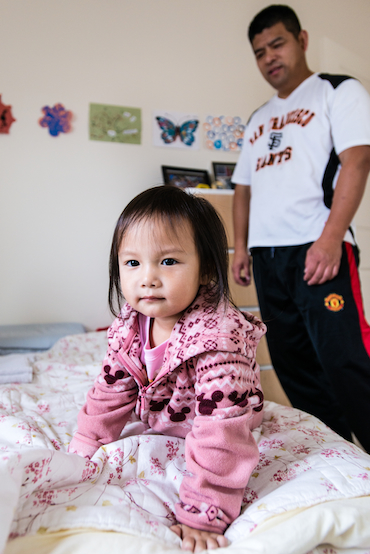 Jack Lin, 45, watches over three-year-old daughter Fiona Lin on Saturday, December 6, 2014. The family decided he would stay home to take care of the children instead of paying for daycare (Photo by Heidi de Marco).

Although Blue Shield covered the baby’s birth, Liu and Knauss had to hector the insurer and Covered California for two months to ensure Nolan and his siblings remained properly enrolled, they said. Liu even filed a complaint with the state Department of Managed Health Care.

“No one was willing to take responsibility. I told them… ‘You took my money and ran.’”

In late September, Knauss was checking online and noticed the family’s coverage seemed to have disappeared again.

After another round of calls they were back in the system. But all the stress resurfaced in November when the pediatrician’s biller called to say coverage couldn’t be verified for her younger daughter Fiona’s visit in July.

“It’s like history is repeating,” said an exasperated Liu, who fielded several similar calls in the summer, when she was trying to sign up her son. “It’s ridiculous.”

‘We can do better’

Neither Covered California nor Blue Shield would comment specifically on Liu’s case. But they and consumer advocates both underscored the need to improve “the customer experience.”

Covered California is “going to have to not just promise but provide a better experience for people in renewing and signing up for coverage,” said Anthony Wright, executive director of Health Access California, an advocacy group.

Despite glitches, Covered California’s first enrollment period, which started in October 2013, was a success compared to the rollout of its federal counterpart operating in 36 states, healthcare.gov. Enrollment this year began on Nov. 15 and runs until Feb. 15, and California’s exchange appears to be going more smoothly. In the first month, 144,178 people selected a health plan, nearly a third more than signed up in the first month in 2013, according to Covered California.

“I’m sure there are people who have had a negative experience that won’t come back,” said Roy Kennedy, a spokesman. “We ask that they come back and let us try to make it up to them. We know that we can do better.”

A Blue Shield spokesman said in an email that during the early implementation of the health reform law, “some customers did not experience the level of service they deserve.”

“We have and will continue to work closely with Covered California and our vendors to address these issues and streamline the process in 2015 and beyond,” said the spokesman, Sean Barry. 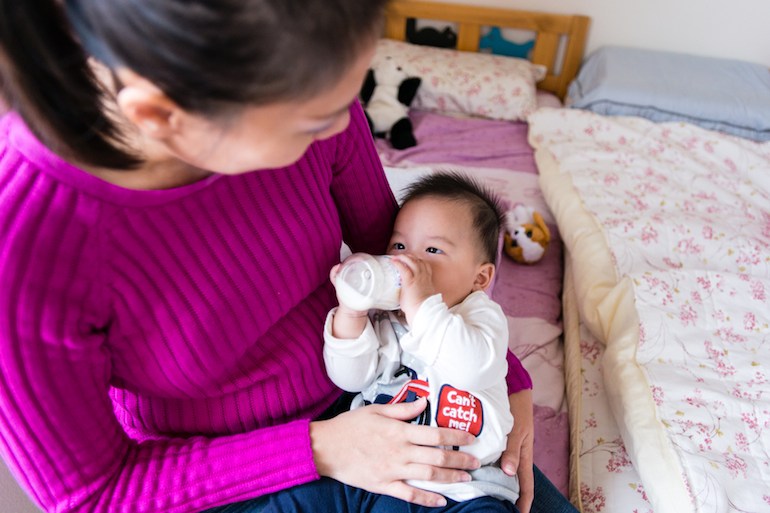 Cecily Liu, 37, feeds her 6-month-old son Nolan Liu. She had trouble adding him to the Blue Shield insurance plan she purchased through the state health exchange (Photo by Heidi de Marco).

For months, Liu went back and forth about whether to re-enroll.

She found herself thinking, “It’s just too much work. I don’t have time for that.”

If she took no action, she and her family would be automatically re-enrolled in their Blue Shield platinum policy. The pre-subsidy premium would be $1,699 a month, a $116 hike.

Days before the Dec. 21 deadline for coverage beginning in the New Year, Liu cautiously decided to give Covered California another try. Instead of a platinum plan, she picked a slightly less rich gold one because she doesn’t expect to need as much care as this year when she had the baby. She will pay $1,482—or $949 with the tax credit.

Liu’s hoping the switch proceeds without difficulties but if the service isn’t substantially better, she’s buying private insurance off exchange next time.

“I don’t want to deal with that headache again,” she said.

Cecily Liu signed her family up for a gold plan from Blue Shield of California in 2015 so her premium would be lower.  “I don’t expect we have significant medical needs like last year when I had a baby … so I think this works for us,” said Liu.

Despite choosing a lower-cost plan for 2015, Liu says the price is still high. “Our premium is about $1,500 per month without the tax subsidy … you call that affordable?” she said.

Liu says she is not completely satisfied with her coverage because it doesn’t compare to the insurance she had at her corporate job. “It doesn’t cover brand-name prescription[s] and chiropractic care, but this is the best I can do right now,” she said.

Cecily Liu kept her gold plan from Blue Shield of California for 2016. The coverage is the same, she said, but not the premium. “It keeps going up,” said Liu — by $100 a month this year, to $1,600. The salary she makes as an accountant can’t keep up with the rising cost, she said.

Although she’s not satisfied with how much she’s paying for coverage, she intends to keep the same plan for her family next year.

“There’s nothing better we can go to,” she said.

Deciding Whether Subsidized Health Insurance Is Worth The Hassle