When Democrats fault the Affordable Care Act, it’s increasingly because it does not go far enough, a poll released Thursday shows.

The results come as Democratic presidential candidate Bernie Sanders has repeatedly derided the law for including too many concessions to the private health care industry and costing consumers too much.

The Kaiser Family Foundation poll found that 51 percent of Democrats want to expand the law, a 15 point increase since December. (KHN is an editorially independent program of the foundation.)

“This increase may be due to the rhetoric surrounding universal health care in the Democratic presidential campaign, with both candidates advocating universal coverage as a goal,” the pollsters wrote.

This month overall disapproval for the law continued to climb, growing to 49 percent of the public while support for the law decreased to 38 percent. Views about the law have seesawed since it was passed in 2010, but opponents have outnumbered supporters consistently since last fall.

Democratic support for the law slightly slipped this month, and now a quarter of party members hold an unfavorable view. Among those, four in 10 want to expand what the law does and almost three in 10 want to scale it back or repeal it entirely. The pollsters did not ask specifically how people would like the law to be expanded. 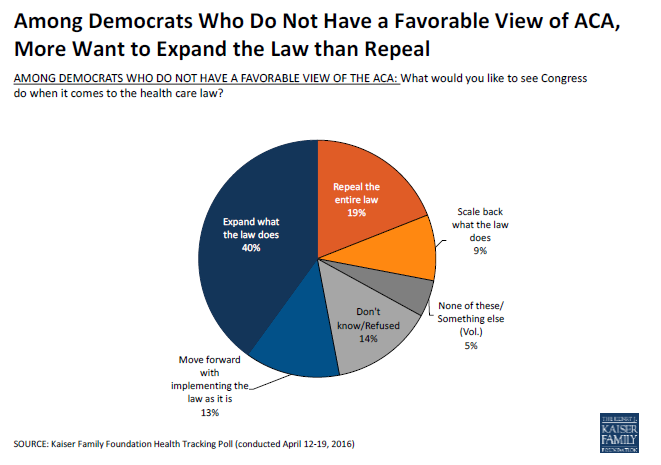 The law remains unpopular with three-quarters of Republicans, while independents are split.

The poll found that voters of all persuasions view the economy and jobs as the most important issue in the presidential election, with 30 percent saying they would like the presidential candidates to discuss those topics. National security was the next subject the public identified as important, followed by immigration and border control and then health care, which 15 percent of voters wanted candidates to talk about.