She needs dentures. Her missing bottom teeth make chewing difficult, so she avoids hard fruits and foods that provide valuable nutrients. Thompson hasn’t seen a dentist in years, even though there’s one where she lives, in the Fair Haven retirement community here.

“When I was working I always took care of my teeth, but in the last couple of years — I don’t have the money to pay for it,” said Thompson.

Thompson’s predicament is common. About 1 in 5 people 65 and older have untreated tooth decay, federal researchers report. But Medicare rarely covers dental care and fewer than half of elderly Americans see a dentist even once a year — often because they can’t afford to — according to a Johns Hopkins University study published in Health Affairs last year. Just 12 percent of Americans over 65 have dental insurance, that study reported.

Dental benefits weren’t recognized as a priority when Medicare was enacted in 1965. Back then, nearly half of Americans ages 65-74 had lost their natural teeth; today, 87 percent in that age group still have some or all of theirs, according to the American Dental Association.

Research shows that untreated dental problems can exacerbate health problems such as diabetes and heart disease, leading to costlier bills for Medicare. That’s why a nonprofit think tank devoted to improving oral health is working toward an audacious goal: Medicare-paid dental care for America’s elderly.

The Santa Fe Group’s objective looks daunting in post-election Washington, where repealing the Affordable Care Act and cutting federal health spending are priorities for both the Trump administration and Congress’ Republican leadership.

What’s more, the costs of expansion would be significant. Such a benefit would likely be heavily used in an aging America whose 65-and-older population is projected to grow at least 30 percent by 2030. Also, while dentures were (and are) relatively cheap, newer techniques to preserve native teeth, such as dental implants, cost many thousands of dollars per tooth.

Santa Fe understands the uphill climb for coverage, but its sights are set on the 2020 elections, said Dr. Claude Earl Fox, a former senior health official in the Clinton administration who’s spearheading the group’s effort. Its strategy: to start building public demand for a Medicare dental benefit so that every major presidential candidate will support it the next time around.

“We have a long road to go, but we think it’s doable and there will be a growing audience for this,” said Fox, who worked as a professor at both Johns Hopkins and University of Miami medical schools after his career in federal government.

The Johns Hopkins study estimated a dental benefit could cost from $4.4 billion to $16.2 billion a year, depending on what’s covered, how much seniors pay out-of-pocket and the level of premium subsidies provided to low-income beneficiaries.

“Most of the talk in Medicare reform is how do we reduce cost rather than expand costs, and adding a dental benefit can make folks [on Capitol Hill] very nervous,” said Amber Willink, the study’s lead author and assistant scientist at the Johns Hopkins Bloomberg School of Public Health.

Prescription drugs were the last major benefit Congress added to Medicare. That was in 2006 after more than a decade of pleading from advocates.

Senior citizens at every income level report an increase in untreated cavities in the past decade, according to federal surveys, though the problem is most acute among the poorest. 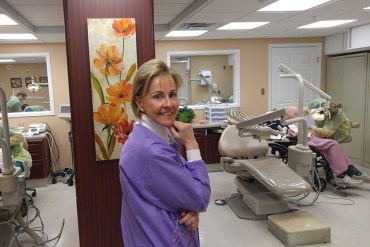 Those untreated dental problems have real consequences. About 24 percent of seniors report difficulty biting or chewing. Among low-income seniors, 36 percent do, according to the American Dental Association’s Health Policy Institute.

Without Medicare to help, seniors have few options to get comprehensive coverage. Private coverage is typically too expensive for many of them.

Medicare Advantage, private plans that cover about one-third of seniors, sometimes offer a limited dental benefit for additional costs but typically only for a small network of dentists.

Medicaid, the state-federal health insurance program for low-income people, aids only about 12 percent of seniors. Even then, state Medicaid coverage for adults is usually limited and nonexistent in states such as Alabama. Many dentists don’t accept Medicaid because reimbursement rates are low.

The Santa Fe Group acknowledges that lobbying Congress about seniors’ trouble eating or their teeth pain will get it only so far. It’s also promoting dental care’s dividends: reducing tooth decay and gum disease can sometimes head off more serious issues such as diabetes and pneumonia. Dentists can spot oral cancers early. And those diseases are more expensive to treat than a cavity.

“It is important to show a benefit can be structured to save money for Medicare,” Fox said.

Supporting evidence from large studies is limited, however. It’s uncertain whether the Congressional Budget Office — the official scorekeeper on federal legislation — would agree with the dental industry’s savings estimates from a Medicare benefit.

Politics aside, some advocates point to firsthand experiences to show that older adults’ health improves with regular dental care.

The Fair Haven retirement community in Birmingham, which includes a nursing home and an assisted-living facility, added a dental clinic in 2012. Pneumonia rates dropped soon after, said Lillian Mitchell, a dentist who oversees the office and is the director of geriatric dentistry at University of Alabama, Birmingham. Mitchell and other faculty oversee dental students who treat patients at the clinic.

The downward trend is consistent with studies that report the same outcome from giving older people regular dental care.

“Taking care of oral health affects their overall health by reducing the inflammation [in their mouths] that has been linked to heart disease, diabetes and other chronic conditions common to the elderly,” Mitchell said.

The clinic’s services cost about half the price of private dentists. 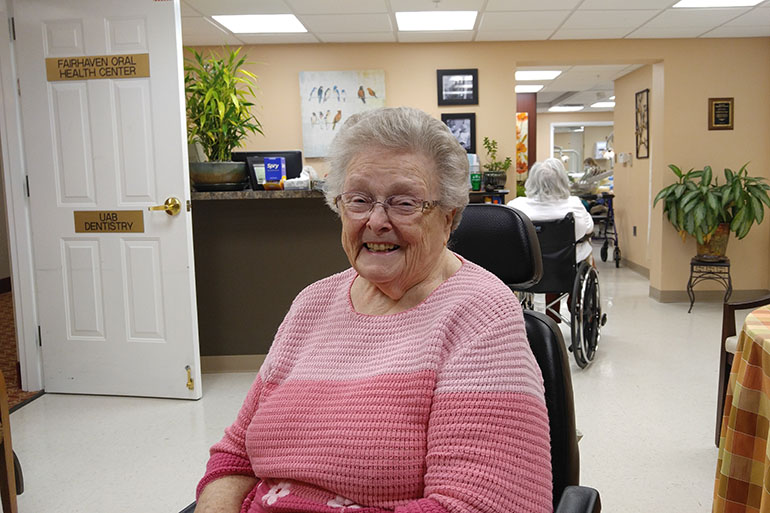 Patients say easy access to the clinic in the building where they live makes a big difference. “This is such a comfort knowing we can go to the dentist without having to leave the facility,” said Peggy Batcheler, 87, a former nursing professor who has lived at Fair Haven nearly 30 years. “We just feel so fortunate.”

Fair Haven is one of a few dental clinics nationwide specializing in affordable dentistry for seniors, especially low-income ones.

But it can help only a small percentage of the elderly in Alabama, one of four states that provide no dental coverage to adults on Medicaid.

In 2016, Alabama’s dental care for older adults was ranked as the worst of all states by an advocacy group, Oral Health America.

The state’s lack of Medicaid dental coverage, its high rates of adults without any teeth and its failure to do a recent survey of adult oral health needs all factored into Alabama’s poor ranking, the group said.

Alabama health officials say they are trying to address the problem through strategies that don’t require legislative action, such as working with the University of Alabama, Birmingham, to expand geriatric dental screening.

“The fact that one of our most vulnerable populations faces more barriers in accessing dental services than any other state in the nation is unacceptable,” said Chris Haag, a spokesman for the Alabama Department of Public Health.

The Santa Fe Group hopes to draw the American Dental Association, AARP and other seniors’ groups into its campaign for a Medicare dental benefit.

“It is not our No. 1 issue, but it is on top of our conversation list,” said Joseph Crowley, a Cincinnati dentist and president-elect of the American Dental Association. He’s optimistic.

This year, four dentists are members of the House of Representatives.