Last fall Kathy Partridge got a phone call from a local emergency room, telling her that her daughter, Jessie Glasscock, was there — and was OK. Glasscock had gone missing overnight.  She was away at college, and had a history of manic episodes. Police had found her in a dumpster and brought her to the ER for her own safety.  It was a huge relief for her mother – but she was completely surprised by what happened next. 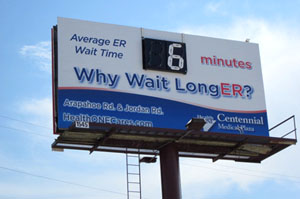 A billboard in Colorado shows the wait time for a local emergency room (Photo by Eric Whitney/Colorado Public Radio).

“It sort of seemed like, well, they’ll stabilize her, help her get back on her meds and she’ll pick up her pieces. Instead, I went down to this emergency room and just found her by herself, basically locked in a closet,” Partridge said.

The “closet” was actually an exam room, but Partridge explains it was small, windowless, and the only furniture was a stainless steel bed.  Her daughter waited there, wearing nothing but a hospital gown, without treatment or a decent meal for 24 hours.  Partridge was shocked to learn there was no place for her daughter to get treatment.  “There was not a single psychiatric bed to release her in in the entire state of Colorado,” she says.

The hospital eventually admitted Glasscock, but long waits like hers are all too common at hospitals nationwide. A study published this month in the Annals of Emergency Medicine by Dr. Anthony Weiss with the Partners Healthcare in Massachusetts found psychiatric patients in its hospitals waited an average of 11.5 hours before being treated or released.

“It’s very difficult to see patients waiting in the emergency room for, in some cases, really, days,” Weiss said. “The fact that is in many ways their first introduction to mental health care is, in my mind, very, very devastating.”

Weiss says there’s a bottom line reason many hospitals don’t even have psychiatric wards anymore.  “The reimbursement for mental health care within the country is amongst the lowest across the different disease states. And so it’s not in some cases economically viable to support these types of units,” Weiss said.

It isn’t that HealthOne wants more psychiatric patients. It wants to compete for the shortest emergency room waiting times in Denver.   Dr. George Bussey is HealthOne’s Chief Medical Officer. He says psychiatric patients with no place to go can really slow things down.

“ER wait times are often a function of how many people are in your waiting room, and how many available beds you have,” Bussey said. “And if you have, for example, a 30-bed emergency department, but you have five patients who aren’t being moved out of beds, you’ve effectively turned yourself into a 25 bed emergency department, at which point you begin to get the back up.”

Emergency rooms can bring hospitals a lot of business. HealthOne might lose money on its new psychiatric unit, but stands to recoup its losses if it can provide speedier service in the emergency room.  HealthOne says the new ward’s main purpose is to provide better care for all their patients, and fill a gap in local health care.

Kathy Partridge is encouraged.  But she recognizes that one new psychiatric ward isn’t going to cure Colorado’s lack of access to mental health treatment.  Her daughter is back on her feet now, but her emergency room experience motivated Partridge to help start a committee at her church that looks for ways the health care system can be more welcoming to people who need psychiatric help.