MEDFORD, Ore. — Bill Harris is blunt: For more than a year, he has been trying to help his wife die.

The 75-year-old retired tech worker says it’s his duty to Nora Harris, his spouse of nearly four decades, who was diagnosed with early-onset Alzheimer’s disease in 2009.

“Let me be honest: Yes. It’s what she wanted,” he said. “I want her to pass. I want her to end her suffering.”

Nora Harris, 64, a former librarian, signed an advance directive after her diagnosis to prevent her life from being prolonged when her disease got worse. Now, her husband said, she’s being kept alive with assisted eating and drinking against her stated wishes.

The onetime Virginia Woolf scholar and world traveler can no longer communicate, recognize family members or feed herself. She’s being spoon-fed at Fern Gardens, an assisted living center in southern Oregon, after a local judge ruled against Bill Harris last summer, concluding that state law mandates that she continue to receive help.

“She did not want to be in a position where somebody had to totally take care of her,” Bill Harris said. “When nature, through the disease, basically said, ‘I can’t feed myself,’ Nora’s position was, that’s it. Let nature take its course.”

In recent weeks, Nora Harris has been gaining weight, climbing from less than 100 pounds to 102 or 103 — just enough to keep her stable. Bill Harris learned that, in addition to three state-required daily meals, staffers have been feeding Nora optional snacks, too.

Now he’s considering going back to court to try to stop the snacks in an effort to let Nora Harris lose enough weight to end her life. Twice before, in 2015 and 2016, she fell to 90 pounds and was enrolled in hospice, with six months or less to live, only to rebound, he said, when staffers coaxed her to eat.

“You’re denying Nora the right to die on her terms,” Bill Harris said. “It’s not a right-to-life issue, it’s a right-to-die issue.”

The southern Oregon case underscores the complexity surrounding the use of advance directives for people with Alzheimer’s disease and other dementias.

Advance directives are legal documents that spell out a person’s end-of-life wishes if they are unable to make their own decisions.

These directives generally allow named agents the power to withdraw artificial hydration and nutrition in the form of feeding tubes, for instance. But when that same nourishment is offered by hand, several states, including Oregon, draw a line, said Thaddeus Mason Pope, director of the Health Law Institute at Hamline University in St. Paul, Minn., and an expert on end-of-life law.

Across the U.S., the more than 5 million people living with dementia are typically encouraged to put their end-of-life wishes into writing early and to pick a trusted person to carry them out, said Beth Kallmyer, vice president of constituent services for the Alzheimer’s Association.

That’s no guarantee, however, that those requests can — or will — be honored. In Nora Harris’ court case, her advance directive and testimony from her husband, her daughter and two close friends all indicated that she wouldn’t want anything to prolong her life.

“That court decision basically condemned Nora to the full extent of the Alzheimer’s disease,” Bill Harris said. “They gave her no exit out of this situation.”

But Eric Foster, the court-appointed lawyer who represented Nora Harris, argued that her directive doesn’t specifically mention food and drink presented by hand. Because she now opens her mouth and swallows when food is offered, she has, in essence, changed her mind, he said in a court document.

Bill Harris said that opening her mouth is a reflex, an automatic response to six decades of habit. 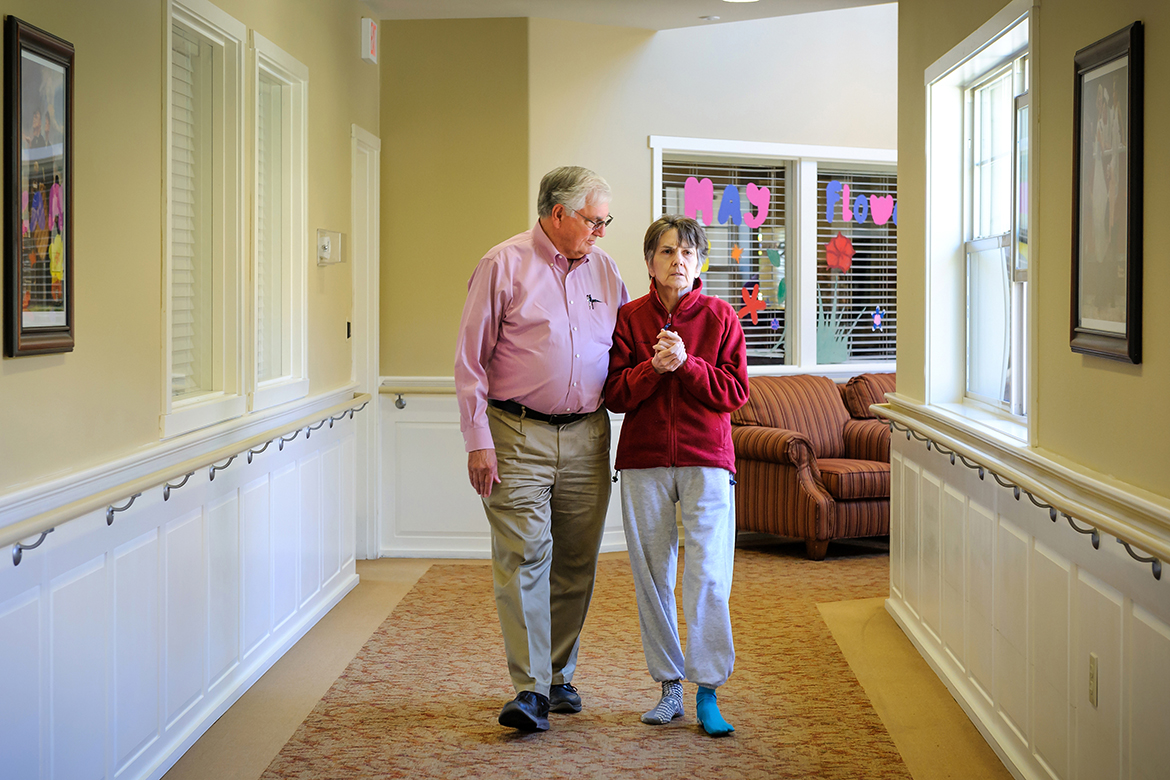 Nora Harris signed an advance directive stipulating no care to prolong her life, but her husband says state law is forcing her to be spoon-fed against her stated wishes. (Jim Craven for KHN)

Kallmyer, with the Alzheimer’s Association, said it’s hard to tell whether someone with dementia is acting out of reflex or desire. The association recommends against tube-feeding for patients with dementia, while also advising what they call “careful hand-feeding.”

“If they’re eating and they’re opening their mouth, it’s difficult to say they didn’t want it,” she said.

“Our concern was just focused on the administrative rule,” he said. “If the rule exists to prevent a facility from committing elder abuse, our focus was on what the rule required. The rule requires the resident be cued with food and they have the choice of eating or not eating.”

Lynn Rawlins, the center’s administrator, said her hands are tied.

“We have to feed them until they stop opening their mouths,” she said before a tour of the center last month. “Unless feeding them causes more harm from aspirational pneumonia or a choking factor. We still have to feed them, even if they choke.”

She spoke in urgent whispers, syllables spilling out, unlinked from words.

Bill Harris put an arm around her shoulders reassuringly.

But he added later: “It’s difficult visiting her, especially when you know what Nora was like before.”

That’s the thorny issue at the heart of advance directives for people who lose the capacity to make their own decisions, said Pope.

If Nora Harris were aware enough to refuse food, instead of passively accepting it, there would be no question.

“Do we listen to the previous Nora or to the current Nora?” Pope said. “That is, unfortunately, not legally or ethically answered well.” 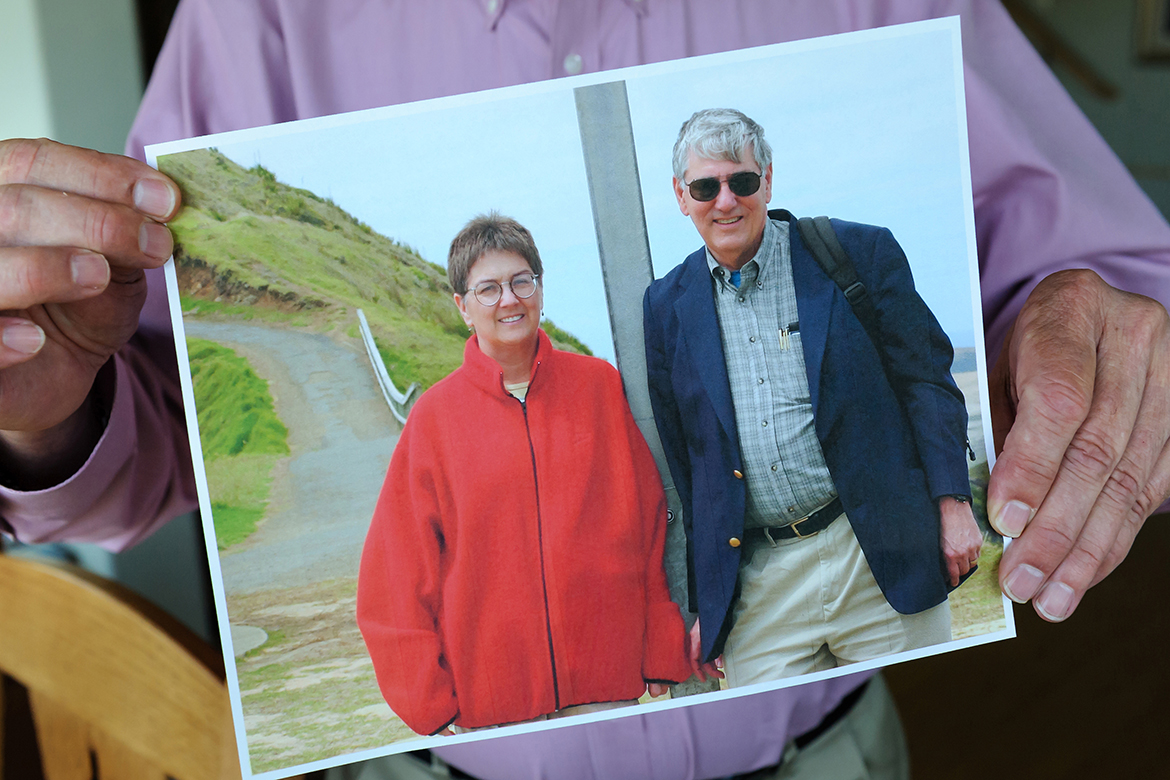 Bill and Nora Harris met at the San Francisco War Memorial Opera House in the early 1970s and launched a four-decade marriage that included world travel. Nora Harris was a librarian and a Virginia Woolf scholar who told family and friends she never wanted to be utterly dependent on others for care. (Jim Craven for KHN)

A bill introduced in the Oregon Legislature last year would have allowed an appointed committee to amend the state’s advance directive form. Critics, including Oregon Right to Life, an advocacy group, opposed the effort, arguing that it paved the way for mistreatment of vulnerable people, including dementia patients like Nora Harris.

“OR legislators move to allow starving, dehydrating the mentally ill,” one headline read. The bill passed the state Senate, but failed to advance.

VSED is being used by a small but growing number of determined patients with the help of their families, Pope said.

In Washington state, board members at End of Life Washington, a nonprofit that supports medical aid-in-dying, created an advance directive focused on people with dementia. Soon the group plans to release a new form for people who want to leave instructions for stopping eating and drinking at the end of life.

Medical experts say VSED can be a relatively painless, peaceful death. In the absence of nutrition and hydration, the body produces opiate-like substances that blunt hunger and thirst. With additional painkillers, comfort can be ensured, they add.

We have to feed them until they stop opening their mouths.

An analysis of VSED research concluded that “terminally ill patients dying of dehydration or starvation do not suffer if adequate palliative care is provided.” A 2003 survey of nurses in Oregon who helped more than 100 patients with VSED deaths said they were “good” deaths, with a median score of 8 on a 9-point scale.

Unlike aid-in-dying laws or rulings now in place in six states, VSED doesn’t require a government mandate or doctor’s authorization.

But the question of whether people with dementia can authorize a VSED death in advance, to be enacted later, when they’ve lost the capacity to choose, remains legally uncertain, Pope said.

For now, the answer in the case of Nora Harris is no.

That’s frustrating for Bill Harris, who says the emotional — and financial — toll of her illness has been enormous.

“The person you know, the person you married, who you love, is basically going away, fading away before your eyes,” he said.

He had planned to retire from his job at Wells Fargo bank at age 67 but worked an extra eight years to pay for the costs of Nora’s care, which total more than $80,000 out-of-pocket each year. Because she fell ill at age 56, she didn’t qualify for Medicare or other government help.

Worse, though, is seeing his once “extremely bright” wife wandering the halls of the assisted living center, “like a zombie,” he said.

“Nora was quite enamored of Virginia Woolf,” Bill Harris said, referencing the British author who drowned herself after years of mental illness.

“If she had known this would happen, she would have put rocks in her pockets and jumped in the river. This is absolutely where she never wanted to be.”