CHICAGO — On an early March day at the beginning of the COVID-19 pandemic, the emergency room at the University of Chicago Medical Center teemed with patients.

Gunshot victims account for most of the 2,600 adult trauma patients a year who come to this hospital on the city’s sprawling South Side. And the pandemic hasn’t dampened the flow.

The Chicago hospital’s experience mirrors what’s happening at other metropolitan trauma units around the nation, where the number of patients seeking care for injuries caused by what’s known as penetrating trauma — gunshot wounds or stabbings — appear to be holding steady, straining hospitals already busy fighting COVID-19.

The Hyde Park hospital’s Level 1 trauma center has been bustling since it launched in May 2018. On that day in March, about a half-dozen gowned staffers in the unit — which is separated from the rest of the ER by a set of double doors — hurriedly worked on a patient who had just been brought in through the ambulance bay.

“We pretty much opened and became one of the busiest trauma centers in the city,” Rogers said.

Much of that is because of its location, he said. The South Side of Chicago is home to busy expressways and vast manufacturing plants, but also some of the most violent neighborhoods in the city. About a third of the University of Chicago Medicine’s adult trauma patients are gunshot victims, Rogers said.

The volume has remained steady despite the city and state issuing a stay-at-home order March 21 in response to the coronavirus pandemic. In fact, Rogers said, domestic violence incidents appear to be on the rise as people shelter in place.

“It’s not surprising that penetrating trauma has kind of stayed stable,” said Dr. Kenji Inaba, trauma chief for the Los Angeles County-USC Medical Center. “One could surmise there’s a lot of potential for this: people being at home, in close contact with others. There’s still potential for that human-on-human interaction to occur.”

Overall trauma statistics appear to be on the decline nationally, driven by a decrease in blunt trauma from fewer car crashes as people drive less during the pandemic, said Jennifer Ward, president of the Trauma Center Association of America.

But injuries from gunshots and stab wounds are not dropping.

“As far as domestic violence, I think communities are in a heightened state of awareness,” said Kathleen Martin, a board member for the American Trauma Society. Also “gun sales are up. People are looking at protecting themselves.”

These trends are playing out across the nation.

At the Los Angeles trauma center, early spring is generally quieter than other times of year. Inaba, the trauma chief, said the unit usually has about 60 to 70 patients weekly with blunt injuries, such as those caused by car or construction accidents. That number has recently been down to as low as 10 to 25 cases as fewer people are driving and working.

But the number of gunshot and stabbing victims has effectively remained static — and maybe even ticked up a bit — hovering around 10 to 15 cases a week, Inaba said.

“Trauma is an interesting thing,” he said. “Here at USC, we have for weeks now stopped all of our elective surgeries. This is one specialty you can’t stop. We need to have surgeons available 24/7.”

At Houston’s Memorial Hermann-Texas Medical Center, which has been called the busiest trauma center in the country, blunt trauma cases dropped by about 5% while penetrating trauma incidents rose by roughly 3% in the three weeks after the city started its March 16 shutdown, according to trauma chief Dr. Michelle McNutt. Although she has anecdotally seen cases of intrafamily violence, she said, it’s too early to have solid data showing whether domestic violence is up.

Metropolitan Family Services, a Chicago-area nonprofit with locations on the South Side, has had a steady number of domestic violence victims seeking services, according to spokesperson Bridget Hatch.

“There’s just less mobility for victims,” said Melanie MacBride, a legal aid attorney with the nonprofit. “People are down to one income or no income. Even when you’re in a domestic violence situation, that might make you more reticent to upend your situation.”

Renata Stiehl, who supervises domestic violence court advocacy for Metropolitan Family Services, said the stay-at-home orders and economic stress could exacerbate tensions and make it harder to report cases before they escalate.

“It’s really like a forced hostage situation,” Stiehl said. “When you have these ingredients and you have someone who has the propensity to commit this type of abuse, you’re creating the perfect environment for it to thrive.”

Stiehl noted that in Cook County, however, accusers are now able to file and have remote court hearings for orders of protection.

And neighbors may be more likely to call the police about a domestic disturbance because they’re home to hear it.

As trauma center staffers continue to treat injuries inflicted by violence, they are also being pulled in other directions because of the pandemic.

To soak up the overflow demand, pediatric trauma units are increasing the age limits of patients they treat from the usual 18 to 21. The pandemic has also forced other changes for trauma patients. Family members generally can’t visit their traumatically injured loved ones because of the coronavirus. Violence-prevention activities have been limited by the outbreak.

Even though protective gear has been hard to come by, doctors and nurses in the trauma centers are having to outfit themselves with personal protective equipment for every patient. “We have to assume they’re COVID-positive until proven otherwise,” Martin said. Trauma staffers are so specialized that if any of them get infected, it can set the whole unit back.

Dr. Brian Williams, a University of Chicago trauma surgeon, said he and his colleagues also work to reduce their patients’ infection risk, putting masks on them when they arrive and housing them in an ICU separate from the one used for treating COVID-19. 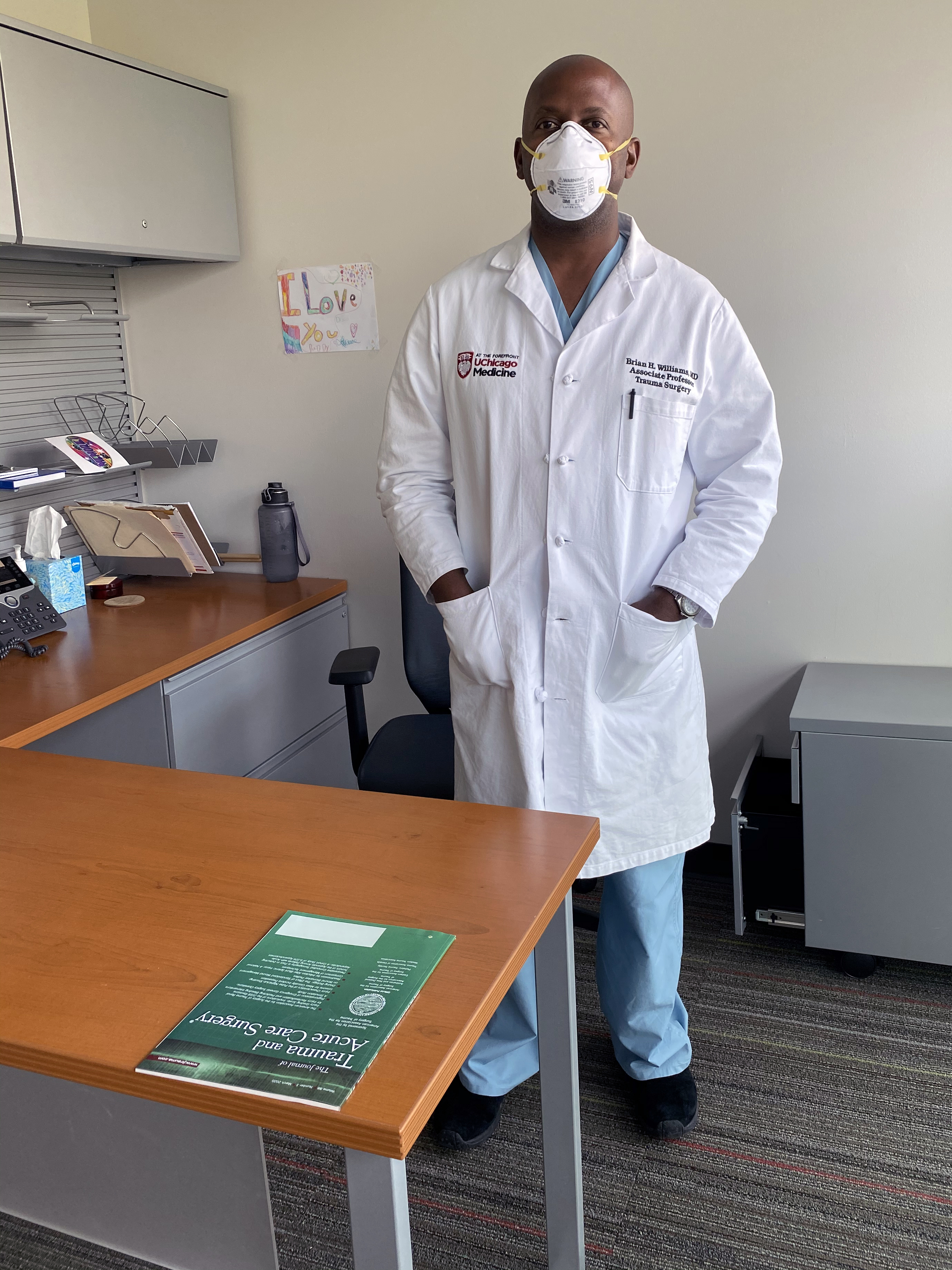 “It’s as if nothing has changed as far as the volume and acuity of the traumatic injuries we are seeing,” he said. “What has changed is how we approach our job in taking care of patients who come in and making sure patients and health care workers are mutually protected without diminishing the level of care we provide.”

Some doctors fear the situation could get worse.

In Cleveland, Dr. Glen Tinkoff, who heads trauma for University Hospitals and sits on the board of the American Trauma Society, said that although his system’s trauma volume has been down about 10% lately, he expects that number to go in the opposite direction once sheltering-in-place restrictions begin to be lifted.

“We’ll see a spike as desperation, despair and hopelessness increase,” he predicted. “There’s a lot of people out of work. I fear that. You can sense the desperation around the city right now. People are wandering. You see individuals that are just kind of looking for trouble now on the streets.”

A septuagenarian was recently brought to the hospital after being beaten with a baseball bat at an ATM, Tinkoff said.

He noted that while shooting injuries were down initially in Cleveland, he doesn’t believe that will continue there or anywhere in America.

“You’re going to see many of us be very busy as the spring and summer months start to come upon us,” he said. “The aftermath is going to be tough. I hope I’m wrong.”

Despite Pandemic, Trauma Centers See No End To ‘The Visible Virus Of Violence’