Signing up for health insurance is intimidating — even if you know you might get some help paying for it. 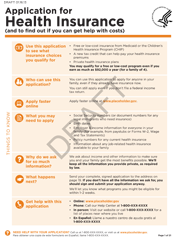 The federal government is trying hard to come up with a way to make the process a bit more palatable — about as simple as, say, doing your taxes online.

The Centers for Medicare and Medicaid Services (CMS) recently released draft versions of online and paper applications which consumers will fill out to buy policies in the new health insurance marketplaces, which are slated to begin enrolling people in October.  Those applications will function as a single, streamlined entry point for  consumers, telling them what sorts of assistance they might qualify for, including Medicaid, CHIP and tax credits to help them afford private insurance in the online marketplaces.  The goal is to make enrollment as easy as possible, because the marketplaces are the chief way that as many as 27 million people are expected to get coverage under the health law.

The 21-page written application is printed in a fetching orange color. CMS estimates it will take 45 minutes to complete. Although critics worry it may be overwhelming to consumers, in the simplest case, single applicants are required to fill out only six pages. It’s also important to remember that this is the government’s first stab at simplifying a notoriously complicated process.

CMS has solicited comments, critiques and suggestions for a second draft.

The second video goes through the same process for an individual, William Doe, who seems to be a stand-in for one of the “young invincibles” — young, healthy people who feel they don’t need health insurance — whom CMS hopes will sign up.