The Affordable Care Act has set new standards — called essential health benefits — outlining what health insurance companies must now cover. But there’s a catch: Insurance firms can still pick and choose to some degree which specific therapies they’ll cover within some categories of benefit. And the way insurers interpret the rules could turn out to be a big deal for people with disabilities who need ongoing therapy to improve their day-to-day lives. 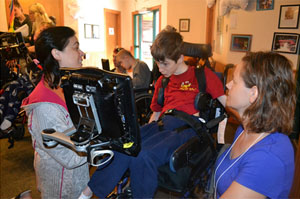 Bryce Vernon is a 20-year-old film student who lives in Los Angeles and has cerebral palsy. He speaks only with the aid of a special computer mounted to his wheelchair that tracks his eye movements. Using his eyes, Vernon can indicate on a screen what letters and words he wants the computer’s voice to say.

It’s amazing technology, and Vernon gets a lot more out of it with help from speech-language pathologist Jill Tullman.

“Now Bryce, I’m want to show you this super cool random button I think you’re going to love,” Tullman tells him during a therapy session at a special camp for young people who use the technology. Vernon’s parents paid out-of-pocket for him to attend the camp.

In the parlance of health policy, the work Tullman is doing with Vernon is called “habilitative services.” It’s different from the more familiar sort of rehab people often get after an injury or surgery. Habilitative services are for people who can benefit from one-on-one time with a therapist to improve daily living skills. But such services can be expensive, and not all insurance plans have covered them.

The Affordable Care Act is changing that, says health economist Lisa Clemans-Cope with the Urban Institute.

“You’re much more likely to find these benefits in a plan in the individual market [starting in 2014] than you would be today. Far more likely,” says Clemans-Cope.

This is because “habilitative services” are included within the 10 categories of essential health benefits the ACA will require in those new plans. Still, while some categories are straightforward — such as maternity care and preventive care — the category including habilitative services leaves more room for interpretation.

For instance, insurers could choose to cover physical therapy for someone with a broken bone, but not cover long-term support services for chronic conditions, such as speech therapy for kids with developmental delays.

Clemans-Cope says some insurers may arrange their benefits in a way that discourages people with expensive chronic conditions from signing up with them. And, she says, people who want to have specific therapies covered are going have to slog through some fine print to figure out if they’ll actually benefit from a particular policy. (The new policies will start to go on sale this fall and go into effect beginning Jan. 1, 2014.)

“This is a big improvement, but we should emphasize that it’s not totally fixed,” Clemans-Cope says. “And people are really going to have to get help to decide which plans cover the benefits they need. “

Whether a person will be able to get the new therapy benefits also depends on where they live. The level of benefits insurers have to provide in each category is based on a model policy in each state, and some of those model policies are a lot more generous than others.

Jill Tappert, an activist in Colorado for people with disabilities, says a lot of details still need to be sorted out before she’ll be able to say whether the health care law has improved things much.

“I certainly hope the way the Affordable Care Act is implemented is a game changer for people in the disabilities community. It can be,” says Tappert, who spent years fighting for habilitative service coverage for her daughter who has autism. “The opportunity is there for policy makers to vastly improve lives.”

Barbara Vernon, Bryce’s mother, says Bryce is now covered by Medi-Cal, California’s Medicaid program. His primary insurance had been her employer-sponsored plan until she was laid off in 2009. She searched for private coverage for Bryce, but says, “Private was so unbelievably expensive, it was unaffordable.”

Barbara says her family’s insurance is “a patchwork,” with Bryce likely to stay on Medi-Cal even after his 21st birthday. She and her other son have an individual plan they have purchased, and her husband has an employer-sponsored plan — but it covers only the employee, not the family.

For his part, Bryce Vernon says his life is a lot better since getting the kind of help that many others may be able to get from the health law, starting in 2014. He works hard to get the most out of the technology and the therapy that lets him speak. His advice to others: “Never, ever give up.”

The new rules for what health insurance companies have to cover may still change. Federal regulators plan to review them as the health law rolls out and could make changes in 2016.

This piece is part of a reporting partnership among NPR, Colorado Public Radio and Kaiser Health News.