When he was 19, Anthony Orefice hit a telephone pole on his motorcycle going 100 miles per hour. Doctors told his family he wouldn’t survive. He did, but the accident left him paralyzed from the chest down, unable to do what he loved — surf, snowboard or ride dirt bikes.

“All you are thinking is the worst, worst, worst – everything you can’t do,” said Orefice, who lives in Valencia, Calif. “I wanted to be dead.”

More than two decades after breaking his back, Orefice, 40, is married, has a 7-year-old son and owns a medical supply business. He also counsels patients newly disabled from spinal cord injuries. “Depression,” he often tells them, “is part of the healing process.” 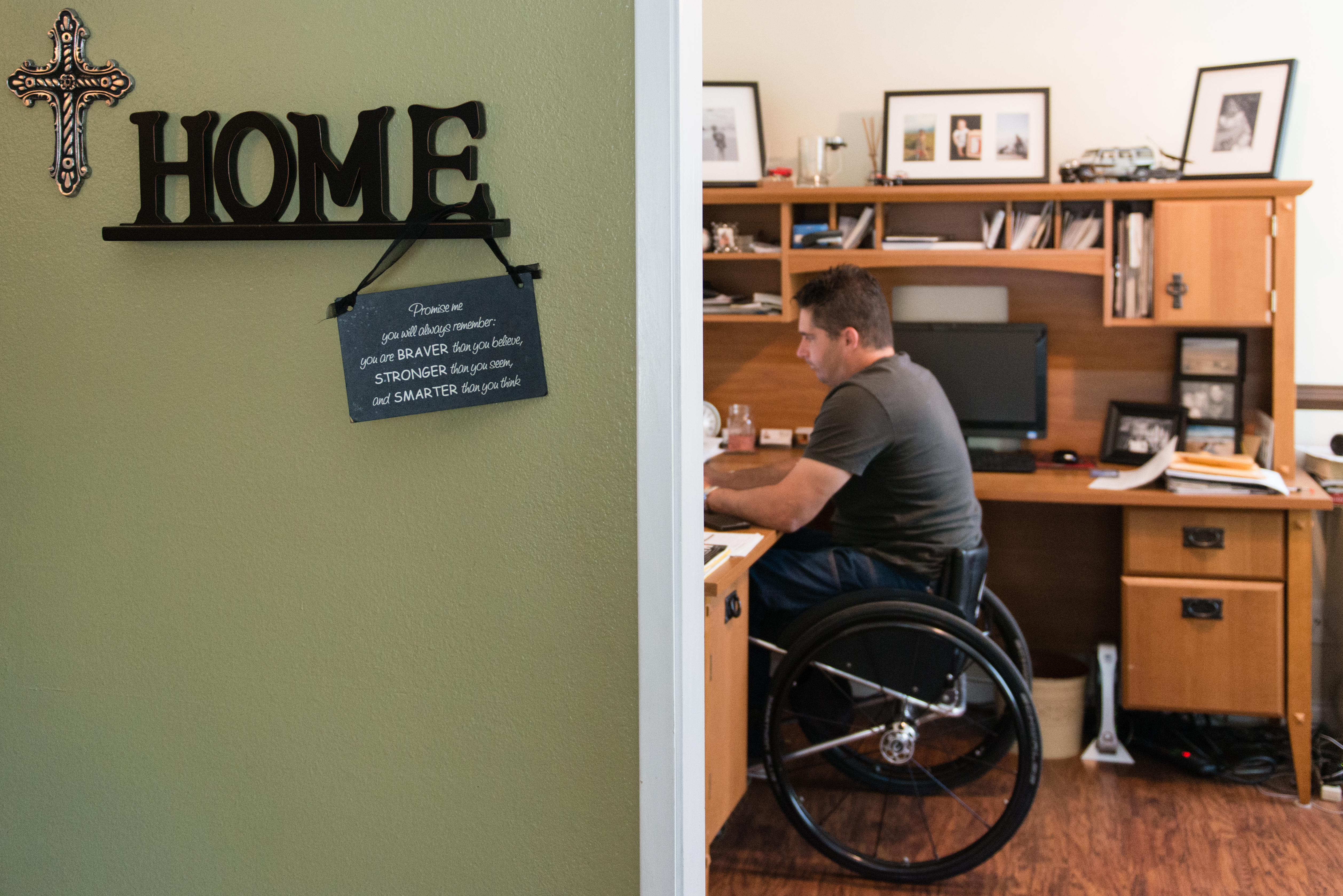 Anthony Orefice, 40, owns a medical supply business and works from home. Orefice says his faith helped him get through the initial depression of being paralyzed. (Photo by Heidi de Marco/KHN).

As California legislators consider a bill that would allow terminally ill patients to get prescriptions to end their lives, disability rights advocates are speaking up in opposition. They worry that if it becomes law, depression and incorrect prognoses may lead people with serious disabilities to end their lives prematurely.

The bill poses “considerable dangers” to people with new disabilities who may have suicidal thoughts, said Marilyn Golden, senior policy analyst at Disability Rights Education & Defense Fund. “It would almost be too easy to make an irrevocable choice,” she said. “It could lead to people giving up on treatment and losing good years of their lives.”

Golden added that the many people who initially received terminal diagnoses have “lived full lives [for] years or even decades” longer than expected.

Disability rights advocates have fought against bills and referendums in Massachusetts, Colorado, Connecticut and elsewhere that would have allowed doctors to prescribe lethal medication. They have met with legislators, participated in forums, conducted letter-writing campaigns and submitted newspaper opinion pieces.

“We have had success after success in stopping these bills,” said John Kelly with Not Dead Yet, a grassroots group of advocates opposed to physician-assisted suicide. The coalition was less organized when laws passed in Washington, Oregon and Vermont, Kelly said. Now, he said they are determined to defeat any bill, including the one in California.

Allowing doctors to prescribe such medication would “open the floodgates” to people taking their lives under the mistaken impression that they are imminently dying or because they think they are a burden on their families, he said. 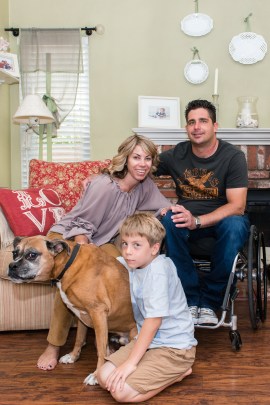 Orefice and his family in their home in Valencia, California on June 15, 2015. (Photo by Heidi de Marco/KHN).

The proposed California legislation, Senate Bill 128, was prompted by the highly publicized death of Brittany Maynard, a young Bay Area woman with terminal brain cancer who moved to Oregon so she could get a lethal prescription. She took the medication and died in November.

The End of Life Option Act, introduced by Democratic state Sens. Lois Wolk and Bill Monning, would allow patients to get fatal prescriptions if they are mentally competent and have six months or less to live. Patients would have to make one written and two oral requests 15 days apart.

Disability rights advocates say there aren’t enough safeguards in the bill. In a letter to Wolk late last month, Deborah Doctor, a legislative advocate for Disability Rights California, wrote that disabled people are vulnerable to abuse and could be coerced by family members not acting in the patients’ best interests. Relatives, she said, could put pressure on people to take life-ending medication.

“Everyone is not Brittany Maynard,” Doctor said in an interview, noting that the young woman’s family supported what she wanted. “Our responsibility is to think of people who are the most vulnerable to coercion, abuse and pressure.”

Doctor also worries that in other cases, physicians may simply be wrong about how long someone has to live. Insurance companies also might overrule treatment for people with disabilities because of the cost of care.

Supporters of the bill say it has many protections built in. For example, they say, people wouldn’t qualify based solely on having a disability. The bill also wouldn’t allow medication to be prescribed if the person were suffering from a mental disorder that impaired judgment.

In addition, physicians would have to attest that the patient’s request didn’t result from undue influence from someone else. And patients would have the final say — they must administer the medications to themselves.

“We don’t want to see this law abused, and we certainly don’t want to see it used against people with disabilities who have enough problems with the health care system,” said Toni Broaddus, California campaign director for Compassion & Choices, a nonprofit organization that supports the bill.

In any event, Broaddus said the vast majority of disabled people wouldn’t meet the criteria for life-ending prescriptions. “Most people with disabilities don’t immediately have terminal illnesses and most disabilities are not terminal,” she said. 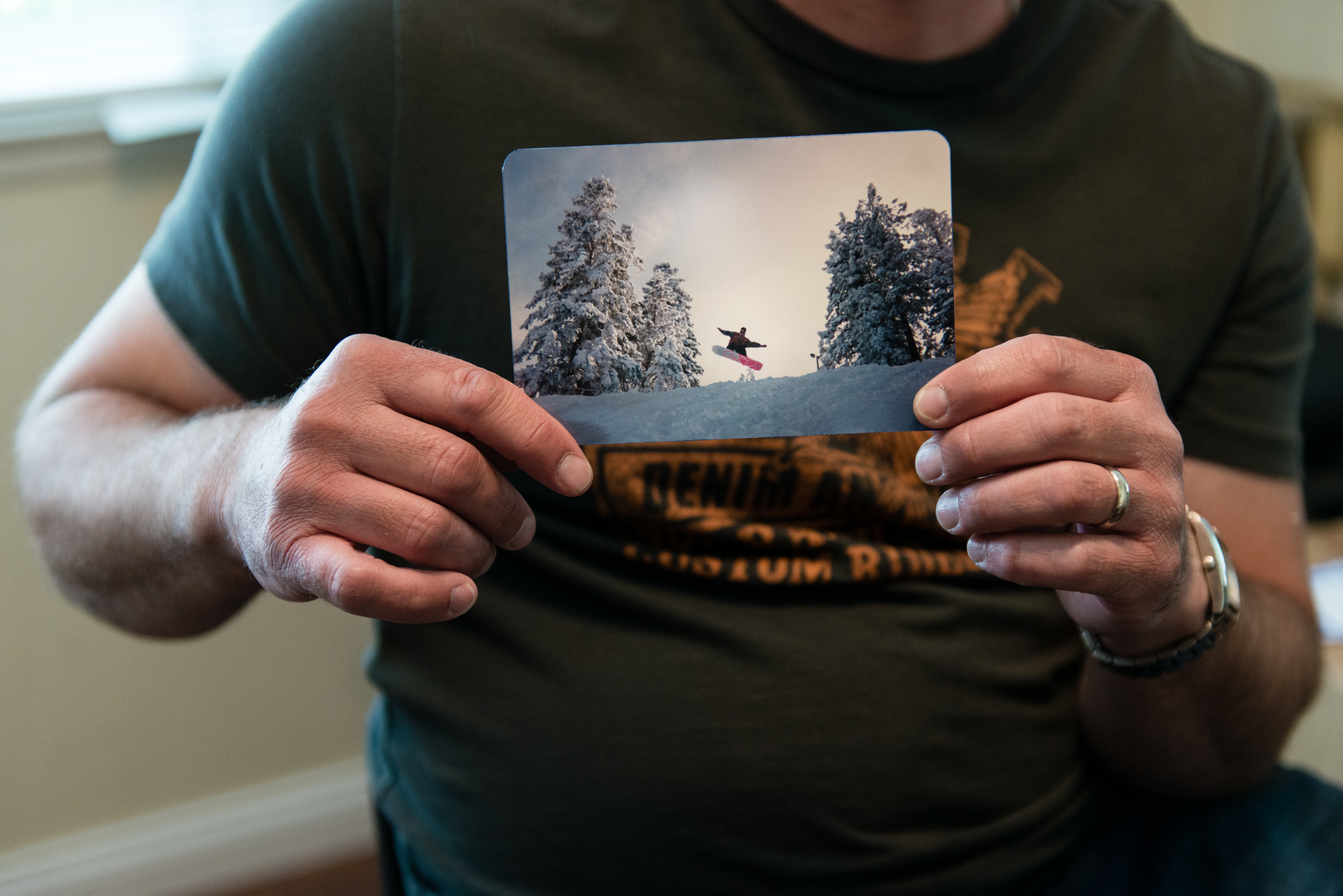 Orefice holds a photo of himself snowboarding at Mt. High in California before his accident. Orefice says he is still physically active despite being paralyzed from the chest down. (Photo by Heidi de Marco/KHN).

Previous efforts to pass similar bills in California have failed under opposition from doctors, religious groups and disability advocates. But the new bill recently passed in the state Senate, and its chances may be buoyed by Maynard’s case and by the California Medical Association’s historic decision to declare a neutral position.

Laurie Hoirup, 59, strongly opposes the bill based on her own long experience. She has had spinal muscular atrophy since she was a toddler. With a curved spine and rods in her back, she cannot eat, bathe or go to the bathroom on her own. She has trouble breathing.

Physicians told her family that she wouldn’t live past 10 years old. “Anyone could be given the wrong diagnoses,” she said. “I am certainly the perfect example of that.”

Hoirup, who is now a grandmother, spent many years working in government and other positions on behalf of people with disabilities. She said she is particularly concerned about people being coerced into ending their lives so they aren’t a burden on others.

Orefice, who wished for death when he was 19, said he is now glad for what he calls the years of “bonus time.” He still struggles with physical problems, including bladder infections and pressure sores. And three years ago, he had another unrelated health scare – colon cancer. He is now in remission.

But Orefice said he doesn’t dwell on his disability or think much about death. Instead, he focuses on his family and thinks what he’s been able to accomplish and what he still hopes to. He paddle boards, plays wheelchair hockey and races specially equipped off-road vehicles.

“I have affected more lives than I would have if I was walking,” he said. “When you are in the trenches, you don’t see that.”