The U.S. is in the middle of a steep and sustained increase in sexually transmitted diseases.

So how are public health officials responding?

In northwest Oregon’s Clackamas County, health officials have decided to ask anyone who comes in with an STD who their sexual partners are — and then track those partners down.

That job falls to two women: registered nurse Mary Horman and disease intervention specialist Liz Baca. They do most of the work over the phone, telling people they’ve had a partner (no name is revealed) who has tested positive for gonorrhea, HIV, chlamydia or syphilis.

It’s a difficult conversation. And many people can’t be reached via phone. So about once a week, Horman and Baca jump into a car and start knocking on doors.

“It can definitely be scary at times,” Baca said, “especially those rural areas where you’re really relying on the GPS to get you there, and sometimes there are roads that lead you to nowhere.” So far, they haven’t gotten lost.

Plenty of residents in the county’s outskirts own firearms, Baca said, and are comfortable displaying them if they feel they need to protect their property.

“I always try to make myself visible and not be fidgety,” she said. Her goal is to approach with as much warmth as possible, saying, “‘I have a nurse with me.’ Or, ‘My name is Liz, and I work for Clackamas County.'”

The women travel as a pair and never enter a home, she said. And they always carry a cellphone to keep the home office informed of their whereabouts.

On the afternoon I caught up with them, Horman and Baca already had been challenged by a dog and had to leave a trailer park empty-handed. They had the right location, but didn’t know which door to knock on. And they couldn’t just ask around, because neighbors might guess why the health department is tracking someone down, and that would be a breach of medical privacy.

They next called on a 64-year-old laborer, whom we’re identifying only as Larry for those same privacy reasons. He agreed to talk with them, in hopes of warning other people about the substantial risks of syphilis. 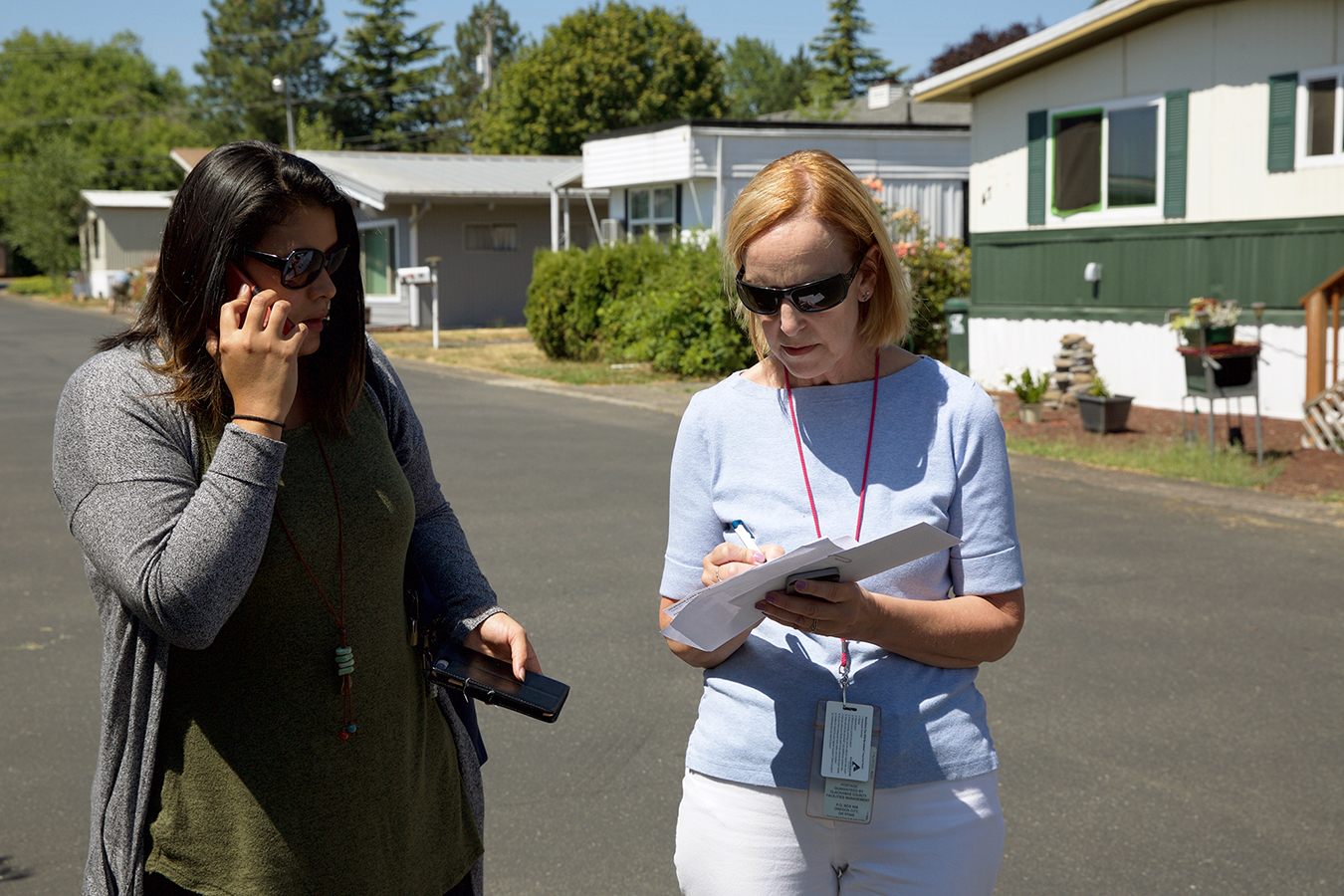 Mary Horman (right), a registered nurse for Clackamas County, and Liz Baca, a disease intervention specialist for the county, search for the right address in an Oregon neighborhood. Part of their job is to get information to people who may have a serious, treatable infection, yet don’t realize it.(Kristian Foden-Vencil/Oregon Public Broadcasting)

Baca and Horman explained how some diseases, like syphilis, are “reportable” — meaning that as soon as Larry was diagnosed, the doctor had to inform the county, which is why they were at his door.

Larry told them he’s already had penicillin delivered intravenously and is healing fine.

The conversation got tougher as Baca tried to understand the extent of Larry’s infection by showing him graphic pictures of sores and rashes.

“So, another symptom of secondary syphilis is the loss of hair,” she explained. “So, you suddenly lose some hair. You’re thinking, ‘What’s going on?’ In a couple of weeks, it resolves. And you’re still infected. So do you recall any of these symptoms?”

“I do,” Larry said, smiling. “And I would probably say that the lesion, I think you called it, I think occurred — it was probably about 10 years ago.”

That means Larry was living with syphilis for at least a decade — without knowing it.

Many people who have syphilis are asymptomatic — meaning they are carriers of the bacteria but show no obvious symptoms. And that makes the infection tougher to fight.

Also, the fact that the disease was, for a time, nearly eradicated in much of the United States, means some younger doctors don’t readily recognize the symptoms and signs.

Larry said that he used to have sex with multiple partners he found on Craigslist, but he can’t remember any names.

After such a long time, it’s too late to track down those people, Baca recalled, crestfallen. Still, she insisted, her time wasn’t wasted.

“Being out in the field, you find individuals and you get that public health intervention that is crucial,” she said. 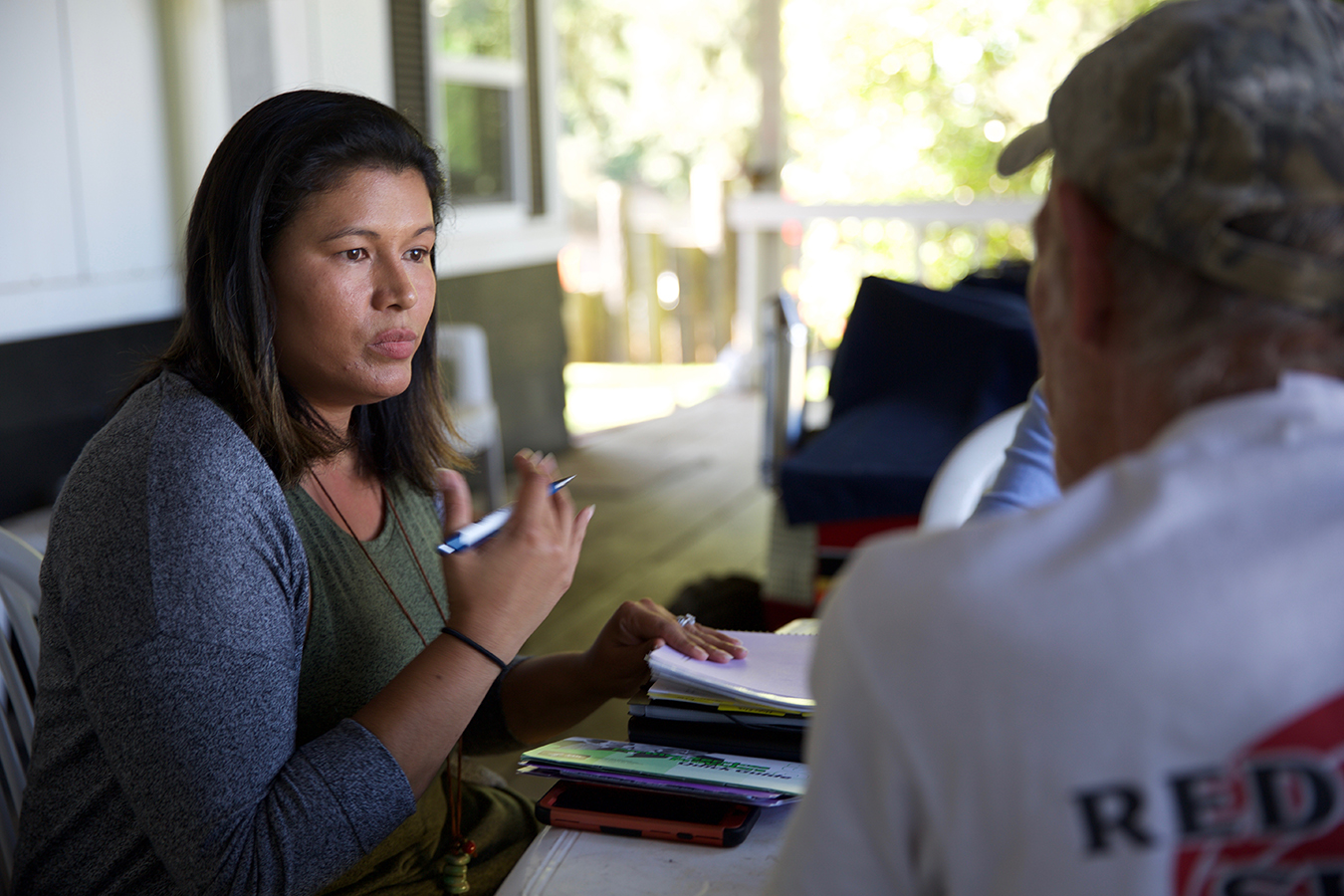 Disease intervention specialist Liz Baca talks to a man who recently found out he’d been suffering from syphilis for at least a decade.(Kristian Foden-Vencil/Oregon Public Broadcasting)

David Harvey, the executive director of the National Coalition of STD Directors, echoed that the efforts of fieldworkers like Baca and Horman are vital.

“Disease intervention specialists are doing heroic work,” he said. “They’re helping to navigate and get people into care.”

Twenty years ago, Harvey said, there were as many as 4,000 disease intervention specialists like Baca in the U.S. Now, because of public health costs, the number is down to about 1,400.

Baca said she’ll continue the work, prioritizing high-risk populations — like men who have sex with men and pregnant women.

The public health officer for Clackamas County, Dr. Sarah Present, said syphilis in newborns can cause serious neurological complications and even death.

“We have now multiple cases of congenital syphilis in our county — just in this year,” Present noted, “whereas that had been fairly unheard of for at least the last decade, if not more.”

Partly because of that surge in syphilis among babies, Clackamas now dedicates more resources to aggressively tracking down partners and encouraging testing, Present said — even if those notifications might lead to family strife.

“We do our absolute best to have the [first person diagnosed] talk to their partners for us,” said Present. “We don’t want to have to be the bad guys. However, we can be a partner for people who have the infections — and help them figure out the best way to control the spread of the disease further.”

A study released by Clackamas County earlier this summer shows rates of syphilis have increased 1,300 percent over eight years — in part, because the numbers involved used to be so small.

“Within the last year, we have seen our numbers dramatically increase to the point I’m quite concerned about it,” Present said.

And Clackamas is no outlier. A new report from the Centers for Disease Control and Prevention found that over the past several years, the number of gonorrhea cases has increased 67 percent, and syphilis cases are up 76 percent.

The director of the CDC’s national center for STDs, Dr. Jonathan Mermin, said the nation is sliding backward.

“It is evident the systems that identify, treat and ultimately prevent STDs are strained to the near-breaking point,” he said.

Scientists say there are many reasons for the national increase — from the rise in antibiotic-resistant bacteria, to the ease of finding anonymous sex in an era of cellphone hook-up apps.

Public health departments in the United States have substantial power. In their effort to prevent the spread of disease, they are allowed to inspect, treat and quarantine anyone — even without consent. That power originates in English common law, which finds the rights of an individual can be limited for the common good.

The most famous example is perhaps the Long Island, N.Y., cook, Mary Mallon, better known as “Typhoid Mary.” She was an asymptomatic carrier — and transmitter — of typhoid in the early 1900s, and was forcibly isolated for years by New York public health officials.

Nobody’s advocating such draconian measures now, especially for sexually transmitted diseases. But public health departments can exercise significant power over certain infectious diseases (such as drug-resistant tuberculosis) that are more broadly contagious because they are airborne.

Clackamas County and the two other counties that make up the Portland metro area have received substantial state and federal grants to help pay for extra public health outreach.

They are taking several steps to stop the transmission of STDs — like strengthening prevention activities, enhancing screening, testing high-risk populations and educating the public. The counties also try to better support people who test positive; expand investigations; and unite community leaders on this important issue.

As Baca and Horman visited with Larry on his front porch, the man thought back to when he first realized he was very sick. Once he found out why his health was failing, he said, he started to take the infection seriously. “Because, really truly, for me,” he said, “it was going to be a matter of life and death.”

Getting the chance to save lives is why Baca and Horman do this work, they said, even if it’s uncomfortable sometimes.

A few minutes later, the women climbed back into the car they’d left parked in a spot where getting away would be easy — just in case Larry wasn’t so accommodating. They checked their map and the next name on their list.

“There are those areas where you’re entering a property and there’s no one in sight,” Baca said, “and dogs can be scary. You have to run very fast if you see them.”

Discreetly Tracking Down Sex Partners To Stop A Surge In STDs