And in a normal year, the health department serving Ohio’s Delaware County would be setting out more than 90 mosquito traps a week — black tubs of stagnant water with nets designed to ensnare the little buggers.

But this year, because of COVID-19, the mosquitoes will fly free.

The coronavirus has pulled the staffers away, so they haven’t set a single trap yet this year, according to Dustin Kent, the program manager of the residential services unit. Even if workers had the time, the state lab that typically tests the insects for viruses that infect humans isn’t able to take the samples because it also is too busy with COVID-19.

That means the surrounding community, just north of Columbus, Ohio, has to wait until potentially deadly mosquito-borne illnesses such as that caused by the West Nile virus sicken humans to find out if the insects are carrying disease.

“It’s frustrating knowing that we can do a more preventative approach,” Kent said. “But we’re stuck reacting.”

In Washtenaw County, Michigan, mosquito samples aren’t being collected because the health department didn’t have the staff or ability to hire and train summer interns who would typically perform the work. In Houston, a COVID-19 hot spot, a third of mosquito control staffers are working the COVID call center, stocking warehouses and preparing coronavirus testing materials. And across Florida, public health officials couldn’t test chicken blood for exposure to mosquito-borne viruses — chickens get bitten by the insects, too, so that can serve as a warning — at the overwhelmed state lab until mid-June, a task that normally begins in the spring. 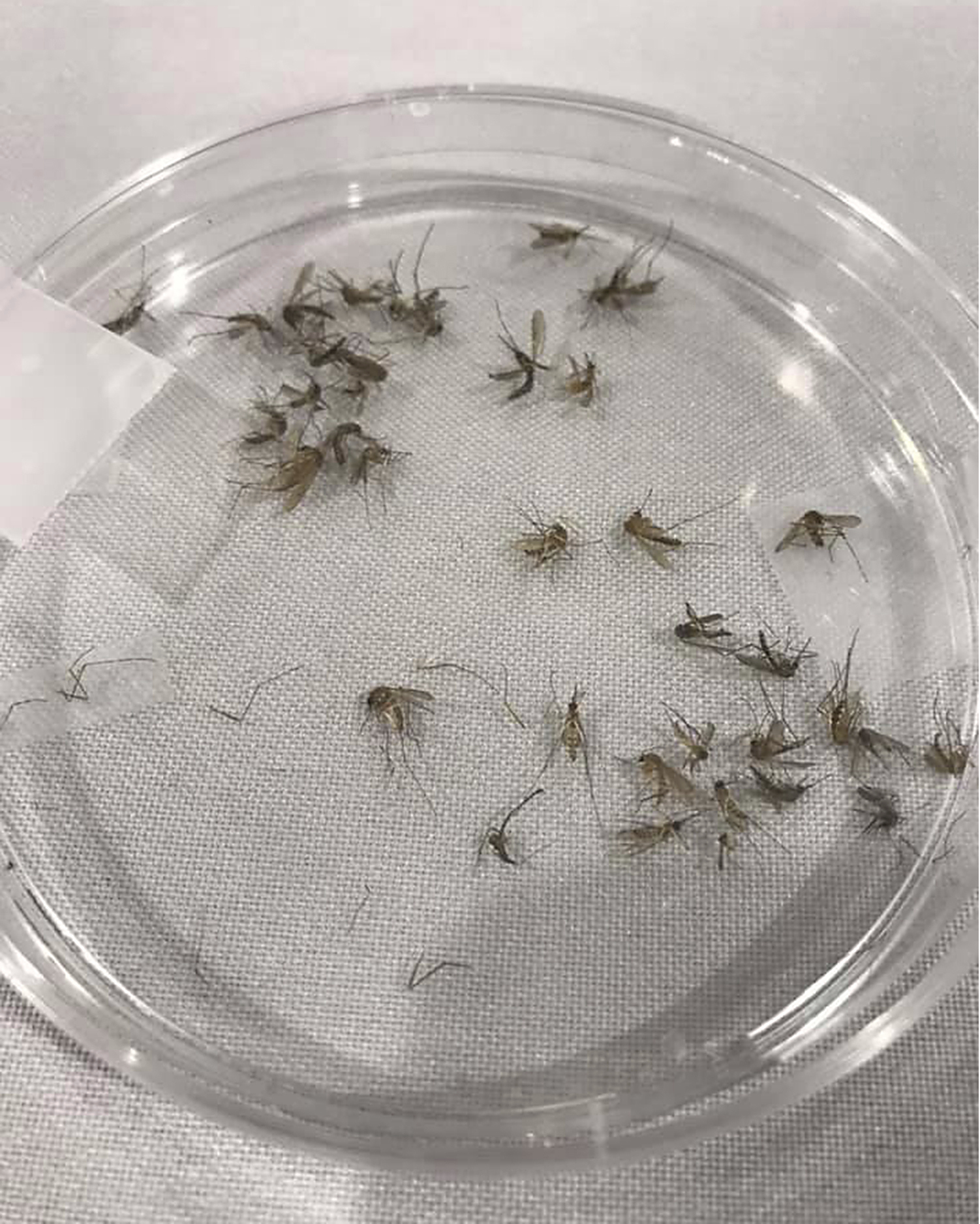 This 2019 photo provided by the Washtenaw County Health Department in Michigan shows a petri dish used to identify mosquito species likely to carry disease. Mosquito samples aren’t being collected this year in the county amid the coronavirus pandemic because the health department didn’t have the bandwidth or ability to hire and train summer interns who would usually perform the work.(Washtenaw County Health Department via AP)

Monitoring and killing mosquitoes is a key public health task used to curb the spread of deadly disease. In recent years, top mosquito-borne illnesses have killed some 200 people annually in the U.S. But that relatively low toll is due in part to the efforts of public health departments to keep the spread at bay, unlike in other countries where hundreds of thousands are sickened and die each year.

“Mosquitoes are the biggest nuisance and pest on this planet. Hands down,” said Ary Faraji, president of the American Mosquito Control Association, a nonprofit that supports public agencies dedicated to mosquito control. “They are responsible for more deaths than any other organism on this planet, including humans.”

This is a physical job that can’t be done by telecommuting from home. Keeping track of mosquitoes and the diseases they carry requires setting up traps, and searching backyards and commercial lots. Public health workers patrol irrigation ditches and overturn the backyard tires, plastic bins and garbage that can hold standing water where mosquitoes breed.

Around the U.S., more than half of public health departments combat mosquitoes. In some states, including Florida and California, specific departments are dedicated to tracking and preventing their spread. The goal is to find infected mosquito populations and kill them before they get to humans, or at least warn the community about their presence as mosquito-borne epidemics are happening more frequently nationally as temperatures rise.

But a joint investigation published this month by KHN and The Associated Press detailed how state and local public health departments across the U.S. have been starved for decades, leaving them underfunded and without adequate resources to confront the coronavirus pandemic, let alone perform the other work like mosquito control they are tasked to handle at the same time. Over 38,000 public health worker jobs have been lost since 2008. Per capita spending on local health departments has been cut by 18% since 2010.

So as public health workers scramble to summon enough of a workforce to address a once-in-a-generation pandemic, they’re being pulled from normal mosquito-related tasks. The short staffing is leaving many localities — especially those without separate, dedicated control districts — flying blind on potential mosquito threats.

The Centers for Disease Control and Prevention has stepped in to help and is now running mosquito testing for at least nine states, including Florida, Arizona and the Carolinas, said Roxanne Connelly, entomology and ecology team lead for the CDC’s National Center for Emerging and Zoonotic Infectious Diseases, as well as evaluating human blood samples for mosquito-borne disease for 40 states. Concerned about the disruptions, the CDC issued a policy brief with the Environmental Protection Agency on Thursday, stressing that mosquito prevention and spraying of insecticides was an essential service that needs to continue even in a national health emergency.

“Mosquitoes are still going to be around, and still causing diseases, no matter what sort of pandemic is going on,” Connelly said.

Even with relatively low rates of disease, in part because of limited testing to measure the problem so far this year, there are worrying signs. Fourteen people in the Florida Keys have come down with locally acquired dengue, which can cause fever, severe body aches and vomiting. Massachusetts has found its first mosquito carrying Eastern equine encephalitis, which kills approximately a third of people infected, according to the CDC. West Nile virus has been found in mosquitoes, birds or other species in at least 18 states and has infected people in nine.

“This year it’s more of a wild card; we’re not getting the surveillance we’d normally get,” said David Brown, the technical adviser for the American Mosquito Control Association.

“I wonder which cases are going to be missed as everyone is going to expect COVID and then move on when they test negative,” she said.

Budget cuts are coming in waves as tax shortfalls rock local health departments. Three municipalities in Texas, including Watauga, Saginaw and Lake Worth, haven’t sent any mosquitoes in for testing this year — they don’t have the time, or have lost staffing and money due to revenue shortfalls from COVID-19, Dacko said.

Smaller health departments appear to be bearing the brunt of the problems, North Carolina state public health entomologist Michael Doyle said in an email, as they have fewer staffers to fight the coronavirus. Some larger departments and programs — like those covering Houston, California’s Central Valley or Maricopa County, Arizona — say they’ve been able to operate close to normal.

And while public health officials say small outdoor gatherings are safest when it comes to avoiding exposure to the coronavirus, some worry that the risk of acquiring mosquito-borne diseases could rise.

“Everyone knows, if you’re outdoors, that’s where you’re actually going to get exposed,” said Chelsea Gridley-Smith, director of environmental health for the National Association of County and City Health Officials.

Labs swamped by COVID tests may be increasing that risk. Local governments often rely on the same public health labs to test whether mosquitoes are carrying diseases like West Nile, dengue or Eastern equine encephalitis that they do to test humans for infectious diseases, like COVID-19. As a result, much of the country is weeks behind where they would typically be in testing mosquitoes for the presence of dangerous diseases, Brown said. 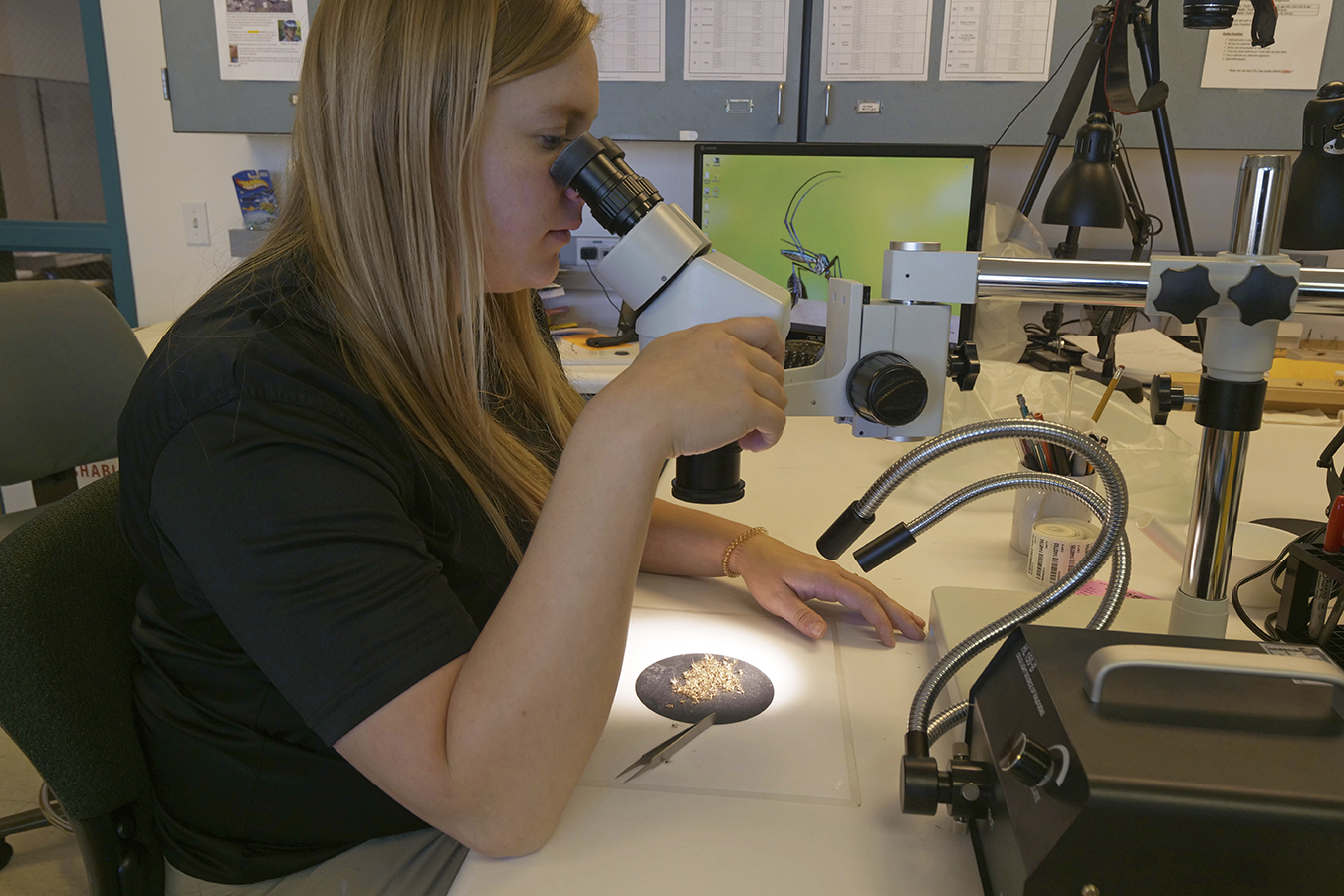 Stopping mosquitoes requires getting information in real time. If a mosquito is carrying West Nile virus, “you want to know that today, not two weeks from now,” Brown said.

When the COVID pandemic hit Salt Lake City, which has its own labs to test mosquitoes, the mosquito department shared its materials with the labs testing for COVID-19 and donated N95 masks that its staff uses when spraying mosquito-killing chemicals, according to Faraji, who is also the executive director of the Salt Lake City Mosquito Abatement District. Utah has done about 5% of the mosquito testing it would usually do by this point, he said.

“Our underlying concern is that one public health emergency doesn’t lead into another,” Faraji said.

Any grand fix to the hole in the nation’s current mosquito netting is going to require some serious cash, Gridley-Smith said, to allow for dedicated staffing, instead of expecting public health workers to juggle it alongside multiple other programs.

The Southern Nevada Health District — which includes Las Vegas — doesn’t have a dedicated mosquito department. From April to October, workers there trap, collect and test mosquitoes for viruses, said Vivek Raman, who oversees the efforts. The rest of the year, the same team is in charge of sanitation for all the area hotels and mobile home parks, including those on the casino strip. But restaurant inspections, permitting and sanitation help pay their way.

“One of the challenges with mosquitoes is they don’t pay permit fees,” he said.

Several bills to support mosquito control efforts, including the Strengthening Mosquito Abatement for Safety and Health Act, have passed through Congress with bipartisan support in recent years but haven’t been funded.

For the CDC’s Connelly, the lack of dollars is just another part of the boom-bust nature of funding for health departments and mosquito control programs nationally. Infusions of cash after bouts with mosquito-borne Zika or hurricanes aren’t enough to fully maintain robust programs, she said, and they often have to start over when the next crisis hits.

Raman and his colleagues did have plans this year to work with the CDC on a project to reduce the population of Aedes aegypti, an invasive mosquito species that can carry a range of deadly viruses, including Zika, and which first showed up in southern Nevada around 2017. That project is on hold until next year.

AP journalists Mike Householder in Canton Township, Michigan, Juan A. Lozano in Houston and Jeannie Ohm in Arlington, Virginia, contributed to this report.

This story is a collaboration between The Associated Press and KHN. To reach the AP’s investigative team, email investigative@ap.org.