The U.S. Food and Drug Administration has gathered scientists and tobacco policy experts to study the potential health risks and benefits of dissolvable tobacco products. The Tobacco Products Scientific Advisory Committee met this week and advocates from all sides lined up to give their pitch to the FDA panel.

Dissolvables, which are made with finely milled tobacco, aren’t new, but they drew new attention last year when R.J. Reynolds and Philip Morris introduced new flavors and varieties in a few cities across the country. Some health officials and lawmakers dubbed the flavored melt-in-your mouth orbs and tongue strips “nicotine candy” and complained to the FDA. 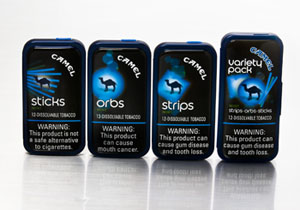 Supporters say dissolvables could help smokers “step down” from their nicotine dependence on cigarettes. Opponents say it’s not clear how consumers actually use the products and who is using them. Will young people try dissolvables, develop a taste for nicotine, then graduate to smoking? Could dissolvables keep people hooked when some former smokers would have–eventually–become nicotine free?

Tobacco companies aren’t allowed to promote dissolvables as a stop-smoking aid, but there’s lots of Internet chatter from individual consumers who report that they’ve given up cigarettes or cigars with the help of dissolvables.

Rutgers University law student Gregory Conley was a smoker for eight years, but quit in August. The 24-year-old used electronic cigarettes—another smokeless product—to quit, and he says dissolvables suppress his cravings when he’s in class. He likes the tobacco-dipped toothpicks and says they give him a satisfying nicotine tingle along with a hit of mint or java flavor.

“You just put it in your mouth and hold it as if you were holding a piece of straw between your teeth,” Conley said.

He volunteers as a legal policy director for the Consumer Advocates for Smoke-Free Alternatives Association and testified during the FDA’s meeting this week. Conley says electronic cigarettes, dissolvables and other smokeless alternatives are powerful tools to help smokers avoid the most toxic aspects of cigarettes.

The Centers for Disease Control and Prevention links one in five deaths each year to tobacco use, about 440,000 people. Cigarette smoking costs America $193 billion a year, according to government estimates for 2000 to 2004. About half of that economic cost is direct health care spending, the other half lost productivity.

The FDA’s review of dissolvables was mandated by the 2009 Family Smoking Prevention and Tobacco Control Act. Matthew Myers, president of the Campaign for Tobacco-Free Kids, says the advisers will weigh the science and report on the consequences for population health, not just individual smokers.

“The FDA law recognizes that even if the product is less harmful, if it’s marketed in a way that its primary appeal is to young people, the net result will be more people becoming addicted to tobacco,” Myers said.

“What we’ve seen is that the colorful way that dissolvables have been promoted and the talk that they have generated has led a lot of people to believe that these products are less harmful—before there’s been an FDA review,” Myers said.

Right now, FDA regulates dissolvables like other smokeless tobacco. They’re stocked behind the counter at convenience and grocery stores, not sold to minors and they have some of the same warning labels as snuff and chew: “Smokeless tobacco is addictive.” “This product is not a safe alternative to cigarettes.”

The newer products have been available in just a handful of markets so far, including Denver, Indianapolis, Portland, Ore., Columbus, Ohio, and Charlotte, N.C. The Colorado Board of Health passed a resolution asking R.J. Reynolds to remove the products from its market, but the company is not complying with the request.

A group of U.S. lawmakers wants stricter rules for dissolvables. Some public health groups say the products should be removed from store shelves until the FDA has weighed in on the science behind dissolvables. Other advocates, sometimes called “harm reductionists” say smokeless products like dissolvables can lessen the disease, death and disability caused by smoking.

Jennifer Ibrahim, associate professor in the Department of Public Health at Temple University, says–done right–harm reduction is a good idea. “I think that everyone in the business of smoking cessation is realistic that people can’t quit cold turkey, but you don’t want to send the wrong message: that nicotine is safe at any level, because it’s not.”

“That’s absolutely true, nothing is absolutely safe,” said Conley, but he says smokers are dying while public health officials wait for definitive proof.

Psychologist Anna Tobia, director of the smoking cessation program at Thomas Jefferson University Hospital in Philadelphia, points out that the new dissolvables are not the only nicotine products meant to be ingested.

“To be fair, they are very similar to smoking cessation products that have been on the market for a very long time–a lozenge or a gum for people who are trying to get off of tobacco,” said Tobia.

Kenneth Warner, a health economist at the University of Michigan School of Public Health, says there’s reason to be skeptical of the tobacco industry’s intention for dissolvables and concerned about what the new products will do.

“The public health community got bamboozled” in the past, he said. When the tobacco makers began selling low-tar nicotine cigarettes, Warner says they were marketed as “mild, mellow,” and safer than regular cigarettes—and it turned out they weren’t.

The FDA’s advisers are wading in to a long-standing debate that shows up evolving and changing ideas about what’s acceptable and what’s safe.  Health policy expert Ibrahim says electronic cigarettes and melt-in-your mouth tobacco are just the latest in a long line of novel products aimed at smokers and people trying to kick the habit.

“I won’t let my kids near the e-cigarettes, because I just don’t know what’s in the vaps [water vapor] that’s coming out of them. Once upon a time people thought exposure to second-hand smoke was safe and clearly that’s not the case,” Ibrahim said. “I don’t intend to expose myself or my family to things which 10, 15 years down the road, we’ll say: ‘Oh, yeah, that’s not good for you.’”

“We will take anything to get our patients better and to get them to reduce the amount of cigarettes that they are smoking,” said stop-smoking expert Anna Tobia. “If this is a good first step, and—maybe–if they can see that they can manage with less nicotine, that would be wonderful.” Many are waiting for the FDA to answer the question: Do dissolvables pose a greater or lesser risk to population health?