Sherry Herman was watching TV when the ad popped up on the screen. Lawyers were seeking clients for a class-action lawsuit, suggesting a link between certain heartburn pills and chronic kidney disease — including the beige capsules she’d taken for years.

She’d been on a drug known as a proton pump inhibitor (PPI) for acid reflux disease since 2004. Thinking it was a “very safe drug,” she had taken the prescription pills for a decade, even though the label recommended four to eight weeks.

Then, in 2014, she was diagnosed with chronic kidney disease. “It came as a huge shock because no one in my family has it,” she said. She had no risk factors for the condition, such as poorly controlled high blood pressure.

A growing body of research suggests the blockbuster drug that helped her stomach may have left her — and a number of patients like her — with a potentially much more serious medical problem.

Recent research has linked the proton pump inhibitors, or PPIs, to serious side effects, including chronic kidney disease, and recently filed lawsuits allege, among other things, that the manufacturers should have known of their potential harms. The risk of chronic kidney disease is as much as 50 percent higher in people who’ve taken the drug compared with those who’ve not — although no causative link has been proven and manufacturers insist they are safe. 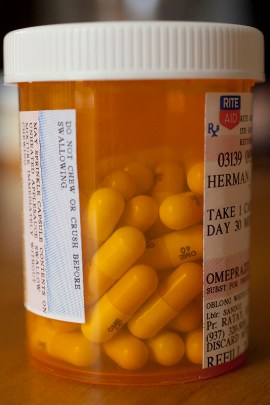 In light of recent studies and lawsuits, Herman wonders whether her heartburn medication is to blame for her chronic kidney disease. (Ty Greenlees for KHN)

The drugmakers strongly defend their products. AstraZeneca is “confident in the safety and efficacy of Nexium and Prilosec when used in accordance with the FDA approved label,” said spokeswoman Abby Bozarth, in an emailed statement.

Proton pump inhibitors, such as Nexium and Prilosec, among other brands, are blockbusters in the U.S. With 15.3 million prescriptions written in 2013 alone, they are considered highly effective at relieving gastroesophageal acid reflux as well as preventing and treating ulcers. Widely advertised, they are frequently prescribed for even minor indigestion, with serial renewals leading to chronic use — even though they were approved as safe by the Food and Drug Administration only for short-term treatment.

Studies have shown that PPIs could be prescribed unnecessarily as much as two-thirds of the time. And it’s not uncommon for patients to take the heartburn pills for years, even though their labels recommend limiting treatment to a few weeks or a few months. The result has been sales worth many billions of dollars a year for pharmaceutical companies, according to commercial intelligence firm EvaluatePharma.

Tens of millions of Americans take the drugs, whether in prescription or over-the-counter formulation. Given those numbers, critics say that even the suggestion of risk is a problem for a drug that is over-prescribed by doctors and used inappropriately by patients.

“When patients complain of gastrointestinal distress, it’s easy to just prescribe a PPI,” said Steven Chen, a doctor of pharmacy and associate dean for clinical affairs at the University of Southern California School of Pharmacy. Once patients start taking the drug, it’s easy to “forget that they may not need to be on it that long.”

What’s more, fueling debate and the emerging lawsuits is FDA’s patchwork system that experts say is poorly equipped to track adverse events — even when they involve drugs like the PPIs that have been used by many millions of American over three decades. With no universally mandatory system to track the use of drugs and their side effects over time, the U.S. instead relies on manufacturers, doctors and patients to convey suspicion of harm as part of a mostly voluntary system.

Dr. Sammy Almashat, of the research group Public Citizen, said only a small fraction of side effects are reported to the FDA and the database is “underutilized” by researchers and regulators. “We do what we can in this country with what we’re given. It’s not much.” 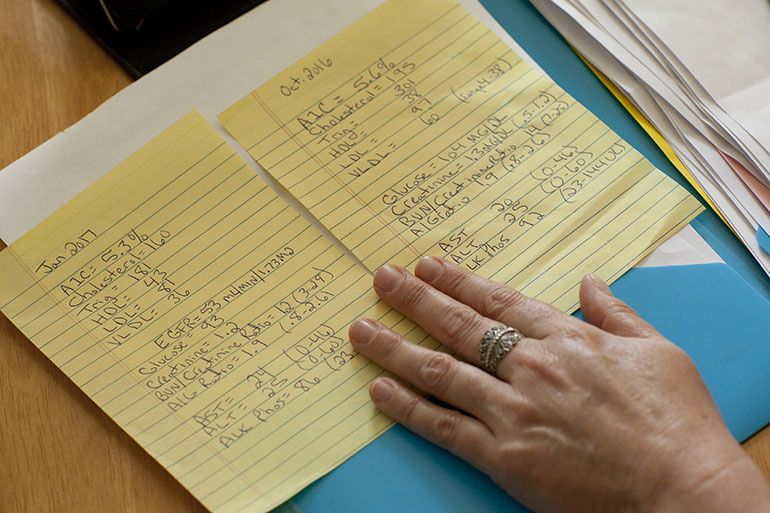 Herman reviews her notes from past doctor appointments, including her creatinine levels and glomerular filtration rate, which help indicate how well her kidneys are functioning. (Ty Greenlees for KHN)

A Godsend With An Uncertain Risk-Benefit Ratio

PPIs, which came to market in 1990, were a godsend for many patients.

When Paula Cox, 69, of Bainbridge Island, Wash., first tried Prilosec, it was like “heaven” because the medication prevented the “extremely intense” heartburn symptoms that had plagued her since the 1980s. She’s been on the pills for over 14 years, and although she hasn’t suffered any of the major health problems linked to them by research, she’d like to stop her daily regimen, especially in light of news about possible side effects. But Prilosec is “the only thing that’s working,” Cox said.

PPIs work by blocking an enzyme in the cells that line the stomach, preventing them from secreting acid. They are the leading proven therapy for upper-gastrointestinal disorders, available by prescription and, in lower doses, over the counter. 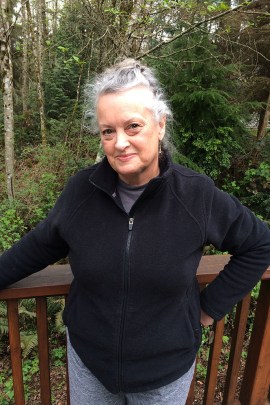 Paula Cox, 69, of Bainbridge Island, Wash., has been taking proton pump inhibitors since the early 2000s. (Courtesy of Paula Cox)

Chronic kidney disease damages the organs over time, rendering the body unable to eliminate wastes from the blood and excrete them through urine. The disease can be life-threatening, and patients may need dialysis or a kidney transplant to survive.

Two huge studies, including data from hundreds of thousands of patients taking prescription PPIs, raised concerns about a link between the pills and kidney failure in 2016. (Over-the-counter medications were not studied because of the difficulty of collecting data.)

Both studies, one published in JAMA Internal Medicine and the other in the Journal of the American Society of Nephrology, found that those taking prescription PPIs were more likely to develop kidney disease than patients taking another class of drugs known as H2 blockers, which treat similar digestive symptoms. The research showed that patients taking the PPIs twice a day were more likely to develop the disease, and that the kidney risk associated with the pills increased over time for the first two years. Each study had the same limitation: It was “observational,” meaning it was not a gold-standard clinical trial that could prove cause and effect. Based on a collection of health records, the research could identify only association — i.e., whether patients taking PPIs were more likely to develop chronic kidney disease than patients who weren’t on the drugs.

“Although they’re seen as pretty benign medicines, [they] may not be,” said Johns Hopkins nephrologist Dr. Morgan Grams, noting that the drugs might cause damage by lowering magnesium levels or triggering an immune reaction.

But others, like Dr. John Danziger, a nephrologist at Beth Israel Deaconess Medical Center and a professor at Harvard Medical School, are skeptical about the association noting that PPIs have also been tied to a number of other risks, including a rare type of infectious diarrheas, pneumonia and bone fracture.

“Is it that the PPI is really causing all these different things or is it the fact that sicker people get PPIs and sicker people have bad outcomes?” Danziger said. “I think it’s probably the latter.”

The experience of Harry Mason, 69, shows how difficult it is to sort out the question of cause and effect, and the legal quandaries that arise from that.

The Vietnam veteran from western Illinois “suffered kidney failure requiring a kidney transplant while taking Nexium as prescribed in 2006,” according to a lawsuit he filed against AstraZeneca in May 2016.

But he has also had congestive heart failure, diabetes and an enlarged prostate, and he takes medication to control his cholesterol. While a law firm initially advised him to sue, it later dropped the case because it determined his kidneys were likely harmed by something else, said Mason. AstraZeneca had filed a request to dismiss the case, claiming Mason’s “sweeping accusations” weren’t backed up with facts.

A Legion Of Lawsuits

Attorney Paul Pennock said his New York-based firm, Weitz & Luxenberg, is investigating roughly 3,500 cases involving kidney harm allegedly from heartburn drugs, although he acknowledges not all will merit a lawsuit. Nationwide, Pennock said, about 122 suits have been filed, against AstraZeneca and other PPI makers such as Takeda Pharmaceuticals, Pfizer and Procter & Gamble, which produces over-the-counter Prilosec.

Allyanna Anglim of Pfizer media relations says legal actions against the company are “without merit” and its PPI labels “have always provided accurate information on their benefits and risks.”

Why, after all these years, aren’t the risks better known?

FDA spokeswoman Andrea Fischer said data linking chronic kidney disease and PPIs “are limited” but that the agency continues to monitor the potential risks. Both medical researchers and the Government Accountability Office have concluded that its methods for doing so are inadequate.

Reports to the FDA mentioning PPIs in relation to a range of kidney problems trickled in and reached a few dozen per year by the late 1990s, according to a Kaiser Health News analysis of the federal Adverse Event Reporting System. The number of kidney-related reports naming PPIs as a primary suspect slowly crept up over the years and then doubled to more than 400 in 2016, the year the two prominent studies were published.

Doctors, consumers and manufacturers submit the reports mostly voluntarily, and they are not verified.

The full side-effects profile of the pills only slowly becomes apparent over the years. Based on dozens of studies and cases, the FDA began requiring PPI labels to include the risk of bone fracture, low magnesium and infectious diarrhea from 2010 to 2012.

Through a lawsuit, the consumer advocacy group Public Citizen forced the FDA in 2014 to add acute interstitial nephritis, a kidney disorder in which structures in the kidneys become swollen, said the nonprofit’s Almashat. Public Citizen is not planning further action on PPIs in light of the two recent studies flagging chronic kidney disease, but as more research is published the organization may consider it.

Research about the potential harms of PPIs don’t mean the “sky is falling,” but doctors should have a “nuanced” conversation with patients about the risks versus benefits of the drugs, said Dr. Kenneth DeVault, a past president of the American College of Gastroenterology. He considers recent PPI research when deciding whether he should prescribe the medication, he said, as should other gastroenterologists.

Sherry Herman of Ohio has decided to keep taking her generic PPI even though she has stage 3 kidney disease, for the pain relief it gives. “It’s such a scary thing to me that I just try to block it out,” she said.

By Sydney Lupkin and Pauline Bartolone May 17, 2017