Janis Finer, 57, a popular primary care physician in Tulsa, Okla., gave up her busy practice two years ago to care full time for hospitalized patients. The lure? Regular shifts, every other week off and a 10 percent increase in pay. 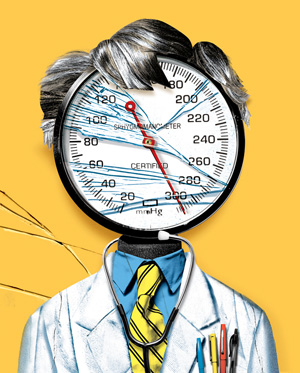 Lawrence Gassner, a Phoenix internist, was seeing four patients an hour. Then he pared back his practice to those who agreed to pay a premium for unhurried visits and round the clock access to him.  “I always felt rushed,” said the 56-year-old. “I always felt I was cutting my patients off.”

Tim Devitt, a family physician in rural Wisconsin, took calls on nights and weekends, delivered babies and visited his patients in the hospital. The stress took a toll, though: He retired six years ago, at 62.

Physician stress has always been a fact of life.  But anecdotal reports and studies suggest a significant increase in the level of discontent-especially among primary care doctors who serve at the frontlines of medicine and play a critical role in coordinating patient care.

Just as millions of Americans are obtaining insurance coverage through the federal health law, doctors like Finer, Gassner and Devitt are voting with their feet. Tired of working longer and harder because of discounted insurance payments and frustrated by stagnating pay and increasing oversight, many are going to work for large groups or hospitals, curtailing their practices and in some cases, abandoning primary care or retiring early.

“I was thinking of leaving medicine; I didn’t think I could maintain the pace,” Gassner said about why he switched to a concierge-style practice with the help of consultant MDVIP.  “I went to bed many nights lying awake, worrying that I missed something.”

The timing couldn’t be worse. “The lack of an adequate primary care infrastructure in the U.S. is a huge obstacle to creating a high-performing health care system,” said David Blumenthal, president of The Commonwealth Fund, a health care research foundation.

A 2012 Urban Institute study of 500 primary-care doctors found that 30 percent of those aged 35 to 49 planned to leave their practices within five years. The rate jumped to 52 percent for those over 50.

Stressed doctors, meanwhile, often mean anxious, dissatisfied patients. Many consumers report feeling shortchanged after waiting weeks or even months for an appointment, only to get a quick once-over and be told there isn’t time to address all their complaints in one visit.

“Your actual one-on-one with the doctor is getting to be less and less,” said Christine Miserandino, 36, of Valley Stream, N.Y., who sees many doctors to manage her lupus.

There are no hard national data on physician burnout. But nearly half of more than 7,200 doctors responding to a survey published in 2012 by the Mayo Clinic reported at least one symptom of burnout that indicated a loss of enthusiasm about medicine or cynicism about it. That’s up from 10 years ago, when one quarter of doctors reported burnout symptoms in another survey.

A RAND study for the American Medical Association last year found that nearly half of surveyed physicians called their jobs “extremely stressful” and more than one-quarter said they were either “burning out,” experiencing burnout symptoms “that won’t go away,” or “completely burned out” and wondering if they “can go on.”  Nonetheless, many described themselves as satisfied with their profession.

But should the happiness of physicians – a fairly privileged lot – be of concern to their patients? Experts answer with a resounding ‘yes,’ saying that unhappy doctors can make for unhappy patients.

Indeed, one of the drivers of physician dissatisfaction is their sense they are shortchanging patients: that they are too rushed, don’t have enough time to listen and aren’t always providing good care.

“Being a doctor is a bit like being a parent, where they say you’re only as happy as your least happy child,” said Martin Kanovsky, 61, an internist in Chevy Chase, Md., who reduced the number of patients he is seeing from 1,200 to 400 last December when he switched to an MDVIP concierge practice. “At the end of the day, if you have one patient who’s unhappy, you’re unhappy.”

Research shows that patients of satisfied doctors are more likely to show up for their appointments and adhere to treatment for diabetes and high blood pressure. Another survey found dissatisfied physicians reporting more difficulty than other doctors in caring for patients.

And in another study, burned-out surgeons were more likely to report having made a major medical error, in the past three months.

“What drives physician satisfaction is also what patients and payers want – delivering good care. And we’re less and less able to do that,” said Christine Sinsky, an internist in Dubuque, Iowa, who is working with the AMA to try to improve physician satisfaction. “You spend less time listening to patients, getting to know them, and thinking more deeply about their care.”

‘I Knew I Had To Be Able To Sleep At Night’

That was the situation that confronted Janis Finer, who loved – but ultimately left -primary care to work with hospital patients.

Like many physicians, she did not want to be bothered with the business of medicine -dealing with insurers, hiring staff and making bank deposits -and sold her practice to a hospital.

But hospital administrators dictated the pace, telling her she needed to see 22 to 28 patients a day.  “At one point, we were scheduled to see patients every 11 minutes,” Finer said.

She was supposed to suggest they schedule another visit if they had more than one or two medical complaints. But Finer worried they wouldn’t come back.

“I knew I had to be able to sleep at night,” she said. “I was trained to dot every ‘i,’ and cross every ‘t’ and leave no stone unturned.”

If a patient had anemia, for example, she could simply prescribe iron, but she wanted to find out what was causing it.

But she found she was unable to do such things while seeing so many patients.

At the same time, her income lagged far behind that of her peers in specialties, a pay disparity that irked her more over time. Salaries of primary care physicians were around $220,000 in 2012, according to the 2013 Medical Group Management Association’s compensation survey, while specialists were averaging close to $400,000, with cardiologists and orthopedic surgeons earning over half a million dollars.

Efforts to boost compensation for primary care doctors have been largely unsuccessful. Specialists’ pay is based largely on procedures, but primary care doctors are usually paid per visit, and not reimbursed for managing their patients’ care outside of visits, which can consume a lot of their time.

Richard J. Baron, president of the American Board of Internal Medicine, set out to document how much time a doctor spends managing care and discovered that on a typical day, he or she handles 18.5 phone calls; reads 16.8 e-mails; processes a dozen prescription refills (not counting those written during a visit); interprets 19.5 lab reports; reviews 11 imaging reports; and reads and follows up on 13.9 reports from specialists.

“This is not just busy work — this is about meeting the patients’ needs,” Baron said.  “But … it doesn’t generate revenue.”

Perhaps the single greatest source of frustration for many physicians is a tool that was supposed to make their lives easier: electronic medical records.

Many do not merely dislike electronic health records – they despise them. “We were surprised by the intensity of their reports,” said Mark Friedberg, a physician and co-author of last year’s RAND study.

In 2009, President Obama committed billions of dollars to help defray providers’ costs of going digital. The goal was to boost coordination of care and to reduce errors and rampant duplication. Most primary care doctors got financial help from the federal government and also face potential penalties beginning next year if they don’t use the new systems.

But many physicians say that instead of speeding things up, digital records have slowed them down. They say the designs often frustrate patients and providers -with the doctor’s face often turned to the computer screen while the patient is talking.

Digital records often contain numerous, repetitive information fields but leave little room for the kind of personal, nuanced observation that was captured in an old-fashioned doctor’s note. And restrictions on who is allowed to input the data have shifted many administrative tasks from medical assistants and nurses to physicians.

“Many physicians said to us, ‘I used to be a doctor, now I’m a clerk,'” said Dr. Jay Crosson, a pediatrician and vice president of professional satisfaction for the AMA.

Meanwhile, the promise of electronic health care records to reduce errors and duplication and facilitate communication has so far gone largely unfulfilled, as far as many doctors are concerned.

John Schumann, a primary care doctor who teaches at the University of Oklahoma’s School of Community Medicine in Tulsa, sees patients at three different hospitals, with three different record systems. “They’re all different and none of them talk to each other,” he said. “That’s the kind of thing that drives doctors’ nuts.”

To ease the burden, some physicians have started using scribes – laptop-carrying assistants who follow them in and out of the exam room.

Scribing is one of several proposals to provide greater support to physicians by giving more responsibility to nurses, health coaches and health educators. But adding personnel involves additional costs, which worries physicians trying to limit their overhead.

The trend line, meanwhile, is troubling. The Association of American Medical Colleges estimates the United States will be short 45,000 primary-care doctors in 2020, when 268,000 are projected to be practicing. That compares to a shortfall of 9,000 in 2010, with 254,800 practicing.

Even a recent uptick in medical students who are electing primary care is not enough to avert the projected shortage. Meanwhile, experienced doctors are joining large groups or becoming hospital employees, which some argue reduces clinical autonomy and discretion -such as deciding how much time to spend with patients -and which may potentially drive up health-care costs because hospitals may tack on additional fees to their bills.

“They want a place to shelter from the storm,” Blumenthal said.

Burnt Out Primary Care Docs Are Voting With Their Feet