Lynn Black’s mother-in-law, who had lupus and lung cancer, was rushed into a hospital intensive care unit last summer with shortness of breath. As she lay in bed, intubated and unresponsive, a parade of doctors told the family “all good news.”

A cardiologist reported the patient’s heart was fine. An oncologist announced that the substance infiltrating her lungs was not cancer. An infectious-disease doctor assured the family, “We’ve got her on the right antibiotic.”

With each doctor’s report, Black recalled, most of her family “felt this tremendous sense of relief.”

But Black, a doctor herself, knew the physicians were avoiding the truth: “She’s 100 percent dying.”

“It became my role,” Black said, to tell her family the difficult news that her mother-in-law, who was in her mid-80s, was not going to make it out of the hospital alive. Indeed, she died there within about a week.

The experience highlights a common problem in medicine, Black said: Doctors can be so focused on trying to fix each ailment that “no one is addressing the big picture.”

Now Black, along with hundreds of clinicians at Massachusetts General Hospital in Boston, is getting trained to talk to seriously ill patients about their goals, values — and prognoses — while there’s time to spare.

The doctors are using a script based on the Serious Illness Conversation Guide, first created by Drs. Atul Gawande and Susan Block at Ariadne Labs. Since its inception in Boston in 2012, the guide has been used to train over 6,500 clinicians worldwide, said Dr. Rachelle Bernacki, associate director of the Serious Illness Care Program at Ariadne Labs.

At Mass General, Dr. Juliet Jacobsen, a palliative care physician, serves as medical director for the Continuum Project, a large-scale effort to quickly train clinicians to have these conversations, document them and share what they learn with one another. The project ramped up in January with the first session in a series that aims to reach 250 primary care providers at the hospital.

That’s despite evidence that patients have better quality of life, fewer hospitalizations, more and earlier hospice care and higher satisfaction when they talk to doctors or other clinicians about their values and goals, according to recent research. 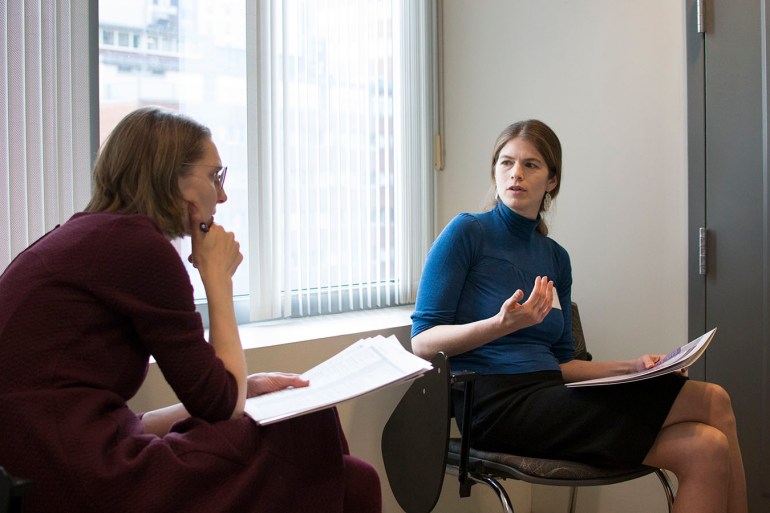 Dr. Thalia Krakower (right), a primary care physician, gets advice from Dr. Juliet Jacobsen, medical director of the Continuum Project at Massachusetts General Hospital in Boston, during a January training session on how to talk to seriously ill patients about their goals and values. (Melissa Bailey/KHN) 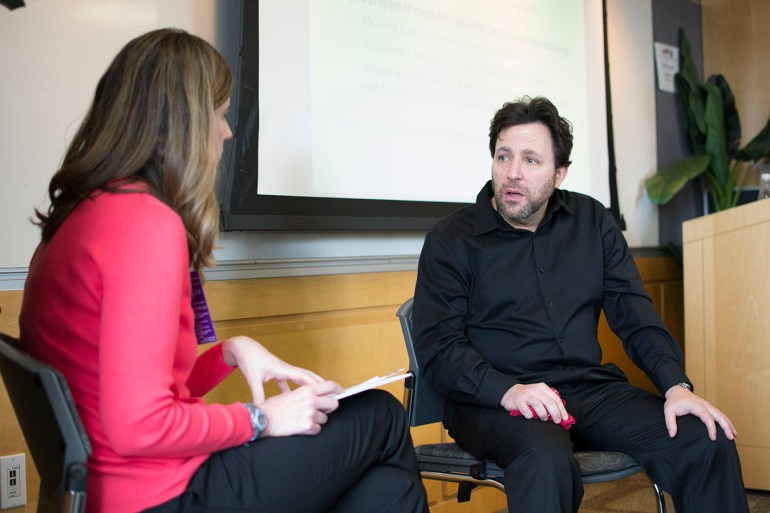 Dr. Corinne Alexander, a palliative care physician at Massachusetts General Hospital in Boston, talks to actor John Carozza, who’s playing the role of a patient with chronic obstructive pulmonary disease, or COPD, during a training session in January. (Melissa Bailey/KHN)

At a recent training session, Jacobsen gave clinicians a laminated page with scripted language to help them along. When the participants role-played with professional actors, difficulties quickly emerged.

Dr. Thalia Krakower, a primary care physician, faced an emotional “patient” whose condition was on the decline.

“I can’t imagine it being any worse,” said the patient, hanging her head in tears.

“How long should we let them be silent and sad?” Krakower asked Jacobsen. “We always step in too soon.”

Physicians let patients speak an average 18 seconds before interrupting them, research has found. Jacobsen encouraged doctors to allow more silence, and to respond to patients’ emotions, not just to their words.

The scripted conversation is quite different from what doctors have been trained to do, Jacobsen acknowledged. It doesn’t aim to reach any decision, nor to fill out end-of-life paperwork.

“For the average doctor, this might feel like you’re not getting anything done,” she said. The goal is to step back from day-to-day problem-solving and talk about the patients’ understanding of their illness, their hopes and worries, and the trajectory of their disease.

In a pilot at Brigham and Women’s Hospital in Boston, Jacobsen noted, the conversations typically lasted 22 to 26 minutes.

At another moment during role-play, Jacobsen stepped in when a doctor skipped over the section in the script where she was supposed to share prognostic information.

The topic is avoided for many reasons, Jacobsen later said: Clinicians’ schedules are crammed. They may not want to scare families with a timeline that turns out to be wrong. And they may not know what language to use, especially when the disease trajectory is uncertain.

When a doctor’s message moves abruptly from “everything’s great” to “she’s dying,” Jacobsen said, patients and their families don’t have enough time to adjust to the bad news.

To address that problem, Jacobsen’s team suggests language that helps clinicians discuss a prognosis without asserting certainty: “I worry the decline we have seen is going to continue,” or, “I worry something serious may happen in the next few months.”

After the training, Jacobsen’s team plans to follow up with doctors to make sure they are having the conversations with patients, starting with those deemed likely to die within three years.

The guide is also being rolled out at Baylor Scott & White Health in Texas, Lowell General Hospital in Massachusetts, the University of Pennsylvania and hospitals in 34 foreign countries, Bernacki said.

And Ariadne Labs has teamed up with VitalTalk, a communications training company, and the Center to Advance Palliative Care to rapidly disseminate the Serious Illness Conversation Guide across the country. They aim to train 200 trainers by June 2019, Bernacki said. (This initiative and other activities at Ariadne Labs are funded by the Gordon and Betty Moore Foundation, which also supports some of KHN’s reporting.)

Right now, she said, whether patients have these discussions depends too much on geography. “Our goal,” she said, “is for every patient with serious illness to have a meaningful conversation about what they care about, in every place.”

[Correction: This story was updated Feb. 12 to correct the first name of Dr. Corinne Alexander, pictured during a January training session.]

Doctors Learn How To Talk To Patients About Dying