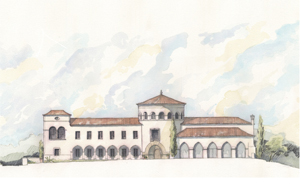 Westlake Dermatology in Austin, Texas got a $3.9 million loan for a $13 million medical office building under a special program in the stimulus law.(Artist’s rendition of the future office.)

Eager to expand or modernize, about 5,000 doctors, dentists and other health care providers have obtained more than $2.5 billion in government-backed loans under the economic stimulus law, according to federal records. But those loans, some experts say, could produce an unwanted side effect: higher health costs.

Dr. Ronald Cooper, a radiologist, borrowed $1.5 million to buy and expand services at an MRI facility in Vero Beach, Fla. Orthopedic Specialists of the Four States in Galena, Kansas, used a $3.4 million loan to double its office and surgery space. West Lake Dermatology in Austin, Texas, received a $3.9 million loan to construct a larger facility to offer medical and cosmetic services such as chemical peels and Botox.

The economic stimulus law passed last year increased to 90 percent from 75 percent the amount of loans guaranteed by the government, and reduced or waived many of the associated costs. The Small Business Administration, which has made $19.6 billion in loans under the law — including 13 percent to health-related businesses — says the loans have helped spur the economy.

Yet, some health policy experts worry that giving billions of dollars to doctors and other health providers will add to the nation’s already rapidly rising bill for health care. That could drive up insurance premiums as well as costs to taxpayers of the huge Medicare and Medicaid programs for the elderly, poor and disabled.

“These types of loans could absolutely backfire,” said Elliott Fisher, director of the Center for Health Policy Research at the Dartmouth Medical School in New Hampshire. Fisher is head of the Dartmouth Atlas of Health Care, which has done studies showing that regions with more hospitals, specialists or diagnostic services tend to have higher per-capita health costs. He argued that “most of these loans will not reduce costs, but in fact they are quite likely to lead to higher costs. … We know that a lot of health care resources are devoted to unnecessary and wasteful services.”

But doctors and others health providers who have received loans say consumers will benefit. “Our patients will be thrilled,” said Dr. Mark Rattinger, a West Palm Beach, Fla., internist who used a $935,000 loan guaranteed through the SBA to move into larger, more modern office space that will allow his group practice, which has six doctors, to add two more.

“Small businesses across the country have been able to secure critical financing as a result of the Recovery Act loan provisions,” SBA Administrator Karen Mills said in a statement. The law’s provisions providing more generous loan terms expire in May.

The SBA-guaranteed loans have been overshadowed by other parts of the $787 billion stimulus law that provided $86 billion to state Medicaid programs, $19 billion to doctors to install electronic health records and $10 billion to the National Institutes of Health.

Like other types of businesses that have received loans, health practitioners have wide latitude in how they spend the money. Many have used it to modernize or expand, according to interviews with loan recipients.

Health care providers did not have to prove a need for new or expanded services to get the loans. That could be a mistake, said John Steen, a Meadville, Pa., health consultant and past president of the American Health Planning Association, which is made up of government health planners and consultants and is based in Falls Church, Va. He said the loans suggest the administration was more intent on creating jobs to counter the recession’s impact than on controlling health costs.

Some providers took out the loans to help them deal with cutbacks in government reimbursements.

Dr. Patrick Lester, an Oklahoma radiologist who owns a small chain of diagnostic imaging centers, secured a $2 million SBA loan. He said he hopes the money will help keep afloat his Broken Arrow facility that is struggling because of Medicare payment cuts. “The government giveth and the government taketh away,” said Lester, owner of Servant Medical Imaging which operates facilities in Oklahoma, Colorado and Texas.