BOSTON–Dr. Henry Feldman is a mobile technology evangelist. He struts boldly around Beth Israel Deaconess Medical Center, where he works as a hospitalist and programmer, armed with an iPhone and iPad. His nickname is the iDoctor. 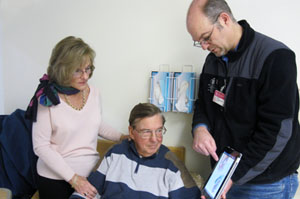 Mobile technology, he argues, has made him a better, faster physician. “It lets me do everything I could do if I was sitting at my desktop at the patient’s bedside, and actually some things I couldn’t easily do,” he explains enthusiastically. That includes showing patients impressive new animated apps, diagrams, medical records and even photos from their own surgeries as they recover.

Beth Israel, a teaching hospital for Harvard Medical School, is one of the most technically advanced hospitals in the country, especially when it comes to mobile technology.

But not everyone at the hospital is quite as gung-ho as Feldman. Recently, Dr. John Halamka, the hospital’s chief information officer who helped usher Beth Israel into the electronic world, has been issuing a warning: mobile technology also has a serious downside—it may distract doctors from patient care.

Doctors who carry mobile devices are often hit with a flurry of texts, e-mails, Facebook messages, tweets and other notifications that automatically pop up on the screen, he explains. And because the vast majority of smart phones and tablets are personal devices that belong to individual doctors, the problem can be hard for hospitals to control. 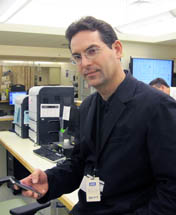 Dr. John Halamka in the emergency department of Beth Israel Deaconess Medical Center with his smartphone (Photo by Jenny Gold/KHN).

“I think all of us who use mobile devices have what I will call continuous partial attention,” Halamka argues. “We’re engaged in our work but at the same time we’re checking that e-mail or we’re glancing at that instant message.” The distractions might be minor for people who work in a cubicle or a storefront, but for doctors, it can be a matter of life and death.

Distracting technology isn’t new for physicians—a pager, cellphone or computer can also divert a doctor’s attention. But at least “a hospital laptop separated doctors’ personal and professional lives,” explains Halamka, who is also the co-chair of a federal committee on health information technology. “With the bring-your-own-device trend, you see the blurring of that separation.”

A doctor might be placing an order for a medication, for example, when “here comes a text from my spouse or a set of messages about something I’m going to do outside the office,” says Halamka. Doctors tend to think they’re good at multitasking, he explains, but “we may not know the errors we’re committing.”

In December, Halamka wrote a case study in an online publication produced by the federal Agency for Healthcare Research and Quality about an incident at another hospital. According to his report, a 56-year-old man was admitted from a nursing home to have his feeding tube replaced. A team of doctors at the hospital was making rounds and decided to stop giving him a blood thinner he was on, but as one of the residents was entering the new order into her smartphone, she got a text about a party. She was so busy RSVP-ing that she never completed the drug order. It wasn’t a small mistake; the patient required open-heart surgery and almost died.

To help prevent such an error from occurring at Beth Israel, Halamka has implemented policies advising doctors on how to minimize distraction on their mobile devices. The hospital is also experimenting with software products that separate the personal and professional functions of devices. He hopes to launch the new programs within the next six months.

The problem, he says, is that new technology fast outpaces the policies that aim to regulate its use.  “The consumer technology industry is bringing more tech to doctor hands faster than policy can be made,” he explains, an experience that occurs outside of medicine as well.

“How long did it take to pass laws against texting while driving,” Halamka asks. “And we had how many people die because they were distracted drivers. There was a lag. I think maybe we’re at that point in health care.”

A 2010 survey of 439 perfusionists, the medical technicians who operate heart-lung machines, found that more than 55 percent reported using their cell phones during procedures. Nearly 50 percent admitted texting, and 21 percent checked their e-mail.

Meanwhile, a 2011 article published in the Journal of Medical Internet Research found that smartphones significantly increase interruptions. Other studies have shown that such disruptions are linked to an increase in clinical errors.

Jonathan Mack, director of clinical research and development at the West Wireless Health Institute, a San Diego-based nonprofit focused on lowering the cost of health care through new technology, says distraction from mobile technology “is case by case, but it’s not a huge problem overall.”

“It’s a learning curve” as hospitals adapt to the new technology, he says. In the meantime, hospital administrators should be comfortable calling doctors on bad behavior if they see it and offer training on how to use the devices so that they don’t become a barrier to care.

But Feldman, the iDoctor, says that of all of the distractions he faces as a physician at Beth Israel, mobile technology is the least concerning, especially compared to the human distractions of nurses, patients and interns.

Doctors’ Smartphones And iPads May Be Distracting