When Elyse Imamura’s son was an infant, she and her husband, Robert, chose to spread out his vaccinations at a more gradual pace than the official schedule recommended.

But delaying vaccines is risky. Many pediatricians will tell you a more gradual approach to vaccinations is better than no vaccinations at all, but they offer some hard advice to parents who are considering it.

“Every day you are eligible to get a vaccine that you don’t get one, the chance of an invasive disease remains,” says Dr. Charles Golden, executive medical director of the Primary Care Network at Children’s Hospital of Orange County.

Recent outbreaks of measles, mumps and whooping cough have once again reignited a war of words over vaccinations.

The squabble is often painted as two-sided: in one camp, the medical establishment, backed by science, strongly promoting the vaccination of children against 14 childhood diseases by age 2. In the other, a small but vocal minority — the so-called anti-vaxxers — shunning the shots, believing the risks of vaccines outweigh the dangers of the diseases.

The notion that there are two opposing sides obscures a large middle ground occupied by up to one-quarter of parents, who believe in vaccinating their children but, like the Imamuras, choose to do so more gradually. They worry about the health impact of so many shots in so short a period, and in some cases they forgo certain vaccines entirely.

Alternative vaccine schedules have been around for years, promoted by a few doctors and touted by celebrities such as Jenny McCarthy. Donald Trump endorsed the idea during a 2015 Republican presidential debate.

The concept gained a large following more than a decade ago, when Robert W. Sears, an Orange County, Calif., pediatrician, published “The Vaccine Book,” in which he included two alternative schedules. Both delay vaccines, and one of them also allows parents to skip shots for measles, mumps and rubella (MMR), chickenpox, hepatitis A and polio.

Sears’ book became the vaccination bible for thousands of parents, who visited their pediatricians with it in tow. But his ideas have been widely rejected by the medical establishment and he was punished by the Medical Board of California last year after it accused him of improperly exempting a 2-year-old from all future vaccinations. He declined to be interviewed for this column.

Imamura, who describes herself as “definitely not an anti-vaxxer,” says she and her husband “followed Sears to a T.” They limited the number of vaccines for their son to no more than two per appointment, compared with up to six in the official schedule. And they skipped the shot for chickenpox.

She concedes, however: “If there’d been outbreaks like now, it would have affected my thinking about delaying vaccines.” 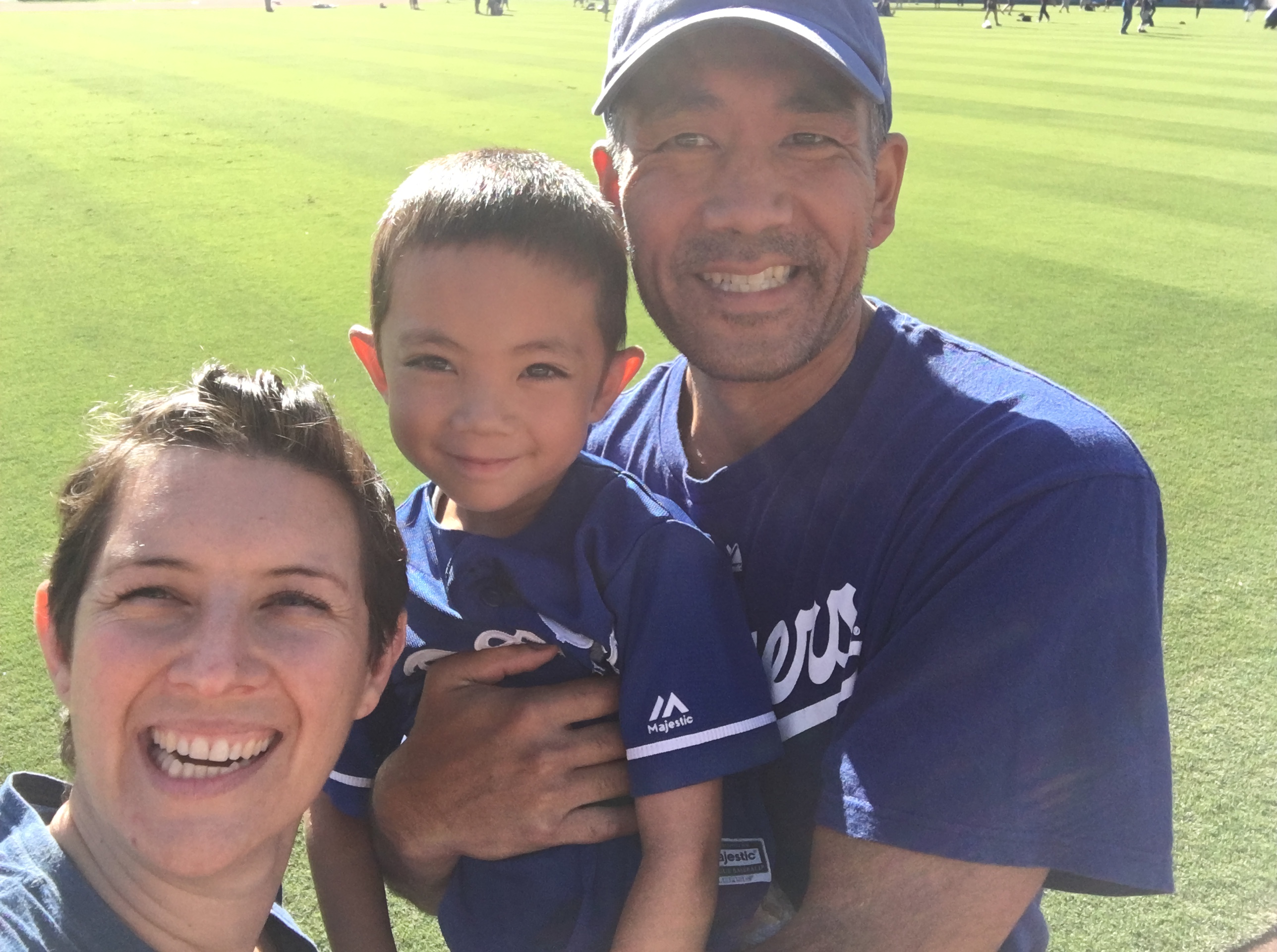 Elyse and Robert Imamura with their son, Amaru (Courtesy of Elyse Imamura)

The ideas promoted by Sears and others have contributed to parents’ worries that front-loading shots could overwhelm their babies’ immune systems or expose them to toxic levels of chemicals such as mercury, aluminum and formaldehyde.

“Touching another human being, crawling around the house, they are exposed to so many things all the time on a daily basis, so these vaccines don’t add much to that,” says Dr. Pia Pannaraj, a pediatric infectious-diseases specialist at Children’s Hospital Los Angeles.

The same is true of some of the metals and chemicals contained in vaccines, which vaccination skeptics blame for autism despite numerous studies finding no link — the most recent published earlier this month.

In the first six months of life, babies get far more aluminum from breast milk and infant formula than from vaccines, public health experts say.

“When you look at babies that have received aluminum-containing vaccines, you can’t even tell the level has gone up,” says Paul Offit, professor of pediatrics at Children’s Hospital of Philadelphia (CHOP) and director of the hospital’s Vaccine Education Center. The same is true of formaldehyde and mercury, he adds.

(Offit co-invented Merck’s RotaTeq vaccine for rotavirus, and CHOP sold the royalty rights to it for $182 million in 2008. CHOP declined to comment on what Offit’s share was.)

Parents who are concerned about mercury, aluminum or other vaccine ingredients should avoid information shared on social media, which can be misleading. Instead, check out the Vaccine Education Center on CHOP’s website at www.chop.edu by clicking on the “Departments” tab.

The Centers for Disease Control and Prevention also provides a detailed breakdown of the ingredients in every vaccine at http://www.cdc.gov/vaccines.

If your child has a condition you fear might be incompatible with vaccinations, discuss it with your pediatrician. The CDC gives very specific guidelines on who should not receive vaccines, including kids who have immune system deficiencies or are getting chemotherapy or taking certain medications.

If your children are not among them, vaccinate them. That will help prevent outbreaks, protecting those who, for medical reasons, have not received the shots.

When parents resist, Pannaraj says, she emphasizes that the potential harm from infections is far more severe than the risks of the vaccines. She notes, for example, that the risk of getting encephalitis from the measles is about 1,000 times greater than from the vaccine.

Still, side effects do occur. Most are mild, but severe cases — though rare — are not unheard of. To learn about the potential side effects of vaccines, look on the CDC website or discuss it with your pediatrician.

Emily Lawrence Mendoza, 35, says that after her second child, Elsie, got her first measles, mumps and rubella (MMR) shot at 12 months of age, she spiked a fever and developed a full body rash that looked like a mild version of the disease.

It took three visits to urgent care before a doctor acknowledged that Elsie, now almost 5, could have had a mild reaction to the vaccine. After that, Mendoza, of Orange, Calif., decided to adopt a more gradual vaccination schedule for her third child.

Yet Mendoza says Elsie’s adverse reaction made her realize the importance of vaccinations: “What if she’d been exposed to a full-blown case of the measles?”

Does It Make Sense To Delay Children’s Vaccines?