Hundreds of survivors of domestic violence have come through the doors of neurologist Glynnis Zieman’s Phoenix clinic in the past three years.

“The domestic violence patients are the next chapter of brain injury,” she said.

Zieman begins every new patient visit with a simple question: “What are the symptoms you hope I can help you with?”

For most, it’s the first time anyone has ever asked how they may have been injured in the first place. “I actually heard one patient tell me the only person who ever asked her if someone did this to her was a paramedic, as she was being wheeled into an ambulance,” Zieman said. “And the husband was at the foot of her stretcher.”

While many patients initially seek out the clinic because of physical symptoms, such as headaches, exhaustion, dizziness or problems sleeping, Zieman’s research shows that anxiety, depression and PTSD usually end up being the most severe problems, she said.

Studies of traumatic brain injury have revealed links to dementia and memory loss in veterans and athletes. And TBI has also been linked to PTSD in current or former service members.

But survivors of domestic violence may be suffering largely in silence.

About 70 percent of people seen in the emergency room for such abuse are never identified as survivors of domestic violence. It’s a health crisis cloaked in secrecy and shame, one that Zieman is uncovering through her work at the Barrow Concussion and Brain Injury Center.

She runs what she said is the first program dedicated to treating traumatic brain injury for survivors of domestic violence.

“About 81 percent of our patients had so many hits to the head, they lost count, which, you compare that to athletes, is astronomical,” Zieman said.

Zieman said it’s not just the sheer number of injuries that makes these patients’ cases so complex.

“One single athletic concussion is hard enough to treat, but these patients are beyond that,” she said. “Unlike athletes, they do not have the luxury, if you will, of recovering after an injury before they are injured again.”

Domestic violence is estimated to affect more than 10 million people each year. Head and neck injuries are some of the most common issues, and Zieman is uncovering how frequently traumatic brain injury is part of the picture.

Still, she said, the lack of recognition of the severity of the abuse-related problems has left many survivors without a definitive diagnosis. Many get blamed for their cognitive impairment.

“They have been labeled for so long with all these horrible things,” said Zieman. “And in the end, it’s not only not their fault but there is a true medical reason behind these issues and there are some things that can be done.” 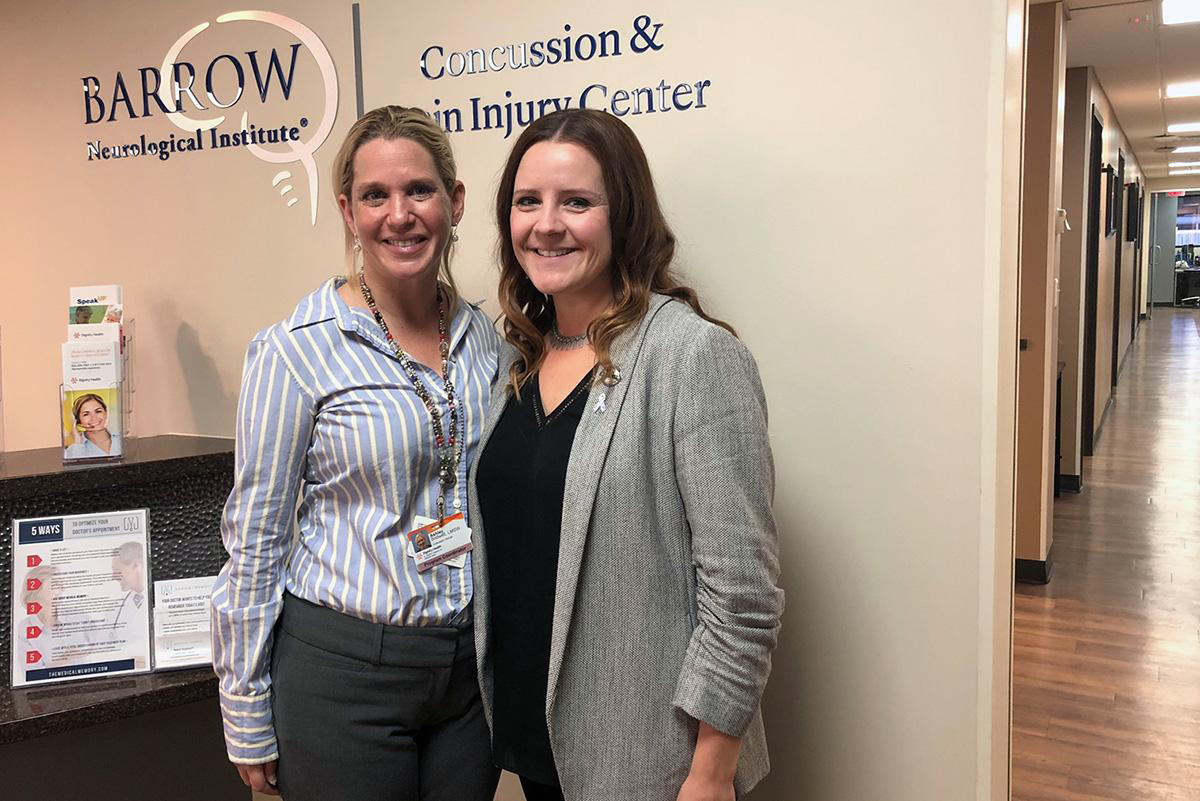 Data on domestic violence and traumatic brain injury are sparse because cases are so underreported, but Zieman said her team’s initial findings indicate the issue is more prevalent than previously thought.

A 2016 review of the medical files of patients in the program — almost all women — discovered only one-fifth of them had seen a physician for their injuries. Eighty-eight percent had sustained more than one head injury from abuse.

Zieman works with local domestic violence shelters to identify women who may be suffering from brain injuries. Workers will send them to Zieman’s clinic where their physical symptoms, such as headaches or dizziness, can be treated along with the cognitive and emotional effects of their abuse. Through grants and private donations, Zieman said, the care is free, whether or not people have insurance.

Ashley Bridwell, a social worker at Barrow, works with Zieman to help survivors manage life with a brain injury. “Some of these simple things like filling out an application or remembering an appointment, or being able to give a solid social or medical history — it’s close to impossible considering what they are experiencing,” she said.

Bridwell helped start the program six years ago after doing outreach to the homeless community and realizing many clients had traumatic brain injuries from domestic violence. She said patients often have long histories of emotional and physical abuse. Many have cognitive impairment from repeated mild traumatic brain injury.

Patients will sometimes arrive at the clinic with a constellation of seemingly unexplainable symptoms. Bridwell said she remembers one who lost her job because of her forgetfulness. The woman thought she had Alzheimer’s.

“And for her to come in and get some information about head injury, and about how multiple hits to the head can impact your memory, your attention, your concentration, your speed of processing, it was incredibly validating for her,” said Bridwell.

The diagnosis gave her a new way to talk about and understand her private struggle. “They realize it’s not their fault,” Bridwell said.

And Zieman said PTSD and trauma affect this population deeply.

“The significance of the mood symptoms in this population far exceeds what we see in our other patients,” she said.

Zieman said medical science is still in the early stages of understanding the effects of repetitive brain injury and how to better treat it. The trauma of domestic violence only complicates the picture, but the survivors she sees remain her favorite patients to treat.

“I feel that we can make the biggest difference for these patients,” she said.